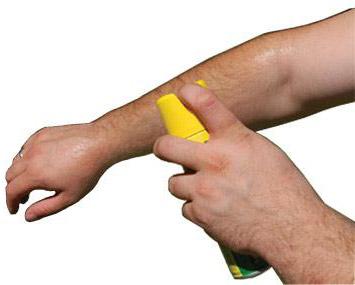 The warm weather brings with it backyard barbecues, outdoor sports and other summer fun - but it also brings annoying insects. The following tips will help you avoid being a host to these irritating critters.

• Choose clothing carefully. You might like your bright orange T-shirt - but so do the insects that haunt your yard. Bugs are attracted to brightly coloured or dark clothing, so choosing a neutral colour in a light shade is a good way to prevent bites and stings. And the least amount of skin exposed, the better. Cover up as much as possible with loose-fitting clothing (mosquitoes can bite through tight clothes).

• Stay indoors during peak pest hours. Insect bites are a concern at any time of the day or night while you're outside; however, there are certain times when you're more likely to be bitten. Stay inside just before sunrise and just after sunset - when insects are enjoying the cooler temperature.

• Remove standing water. Water dishes for pets, birdbaths and kids' water toys are a breeding ground for insects that lay eggs in wet areas. Change water in pets' dishes or birdbaths frequently; wipe down your children's toys and bring them inside after use. Poke a hole in garbage cans or other containers to allow water to drain out. Fill in any "swampy" areas of your property or grooves in the ground where water collects after rainfall.

• Avoid sweet drinks outside. Bugs are attracted to sweet things, so don't bring cola or fruit juice outdoors. If you do, be sure to check cups, bottles and tins before raising them to your mouth for a drink that might not be so refreshing!

• Keep bugs outdoors. If you plan on leaving doors or windows open to let the fresh air into your home, install screens to keep insects out. Make sure they fit perfectly and have no tears, as the tiniest gap can let bugs inside.

• Wear insect repellent. Always read the entire label, following all directions, before using insect repellent. Apply sparingly on exposed skin and on top of clothes. Do not spray on hands (especially on children) to avoid transferring to eyes, nose or mouth. Spray in well-ventilated areas to avoid inhaling chemicals. Do not use products containing the chemical DEET on infants; according to Health Canada, repellents containing less than 10 per cent DEET may be used on children aged two to 12 years, while individuals over 12 may use products with DEET concentrations up to 30 per cent. If using sunscreen as well, apply insect repellent last.

• Grow insect-repelling plants. If you have a flower garden, consider planting marigolds amongst the blooms. They're bright and beautiful - and they have a reputation for repelling mosquitoes.

That's an excellent idea. I'm definitely going to try that next season.

I want to share an e-mail I received some time ago, it really works and it it is very cheap. Listerine is amazing, just put it in a spray bottle and spray it around your patio, around your doors and windows and your campsite. It works for days; the nasty mosquitoes will stay away. You can buy it for a dollar at the dollar shop. I was talking to my family in the UK, they have tried it and it works for them, too. No more smelly insect spray! Give it a try! From Margaret Crocker