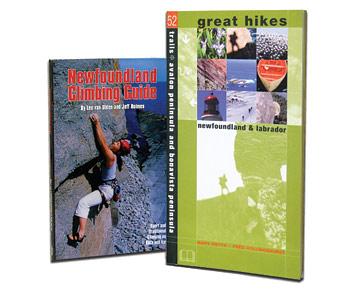 Exploring the great outdoors can be frustrating - and even dangerous - if you haven't adequately prepared for your outing. Imagine setting out for a leisurely stroll with the kids, only to find out the route you've chosen is a steep uphill climb over rocky terrain - or finding yourself stranded on a narrow ledge without the proper gear, having navigated yourself halfway up a cliff face during a difficult climb. 52 Great Hikes and Newfoundland Climbing Guide are two comprehensive, helpful sources of information to help you prepare for your outdoor adventures.

Whether you're an experienced hiker or you're just getting started, a copy of 52 Great Hikes will help you decide which trek to take next. For each of the hikes featured, the authors identify the trailhead and the distance of the trail. They also assign a difficulty rating and point out the highlights (scenery, wildlife, landmarks, etc.) not to be missed along the hike - a must-have if you plan on hitting the trails on the Avalon and Bonavista Peninsulas.

If you are into climbing (either on rock or ice), check out the Newfoundland Climbing Guide, containing notes on nearly 200 routes on Newfoundland's Avalon Peninsula and the south coast. Each route is assigned a difficulty rating and includes important notes about route conditions and what gear is required for the climb, as well as dangers to be wary of, such as wet climbing surfaces or rogue waves. The authors warn, however, that this guide is no substitute for instruction and experience, which are mandatory for safely navigating your way to the top of any climbing route.

Journalist Martin Lobigs set out from St. John's, Newfoundland in 1998 with little more than an old, used bicycle and an ambitious goal in mind: To reach South America on his own steam. In A Life on Wheels, he's written about the ups and downs of this incredible journey, which took him five years to complete. The trip is always interesting and often dangerous. Lobigs is a bold adventurer, proving himself to those who are suspicious of him - and befriending many of the people he meets along the way. He introduces us to a myriad of interesting characters he encounters, from thieves and guerillas to priests and the poverty-stricken and everyone in between. By the journey's end, Lobigs has had much more than an exciting adventure; he has gained a global education that cannot be found in textbooks - or even by vacationing in Central and South America. Lobigs has travelled the land, inch by inch. He's lived among the people of these countries, has eaten their food, learned about their industries, spoken their languages, and gained a true understanding of their heritage, customs, beliefs and values. In short, Lobigs has made a journey that many of us will wish we had the courage to take ourselves. But for now, reading about his experiences in A Life on Wheels will take you on a great escape of your own.

Planning to do some hiking around Newfoundland this summer? If so, reading The People's Road Revisited by Wade Kearley will help you plan your exploits. But it's much more than just a guide for hiking enthusiasts. The People's Road Revisited is Kearley's personal account of his hike along the abandoned 547-mile railway bed that stretches from Port aux Basques to St. John's, Newfoundland. Kearley made the long journey in the summer of 1993 as part of an effort to raise awareness about the trail and to prevent it from falling into ruin and worse - being forgotten. Originally published as The People's Road in 1995, The People's Road Revisited provides an update on trail conditions, as well as interesting historical notes on the long life of the railway, which reaches back to nineteenth-century Newfoundland. Since his first ambitious trek across the island, the provincial government has recognized the railbed as an island-wide provincial park and the not-for-profit Newfoundland T'railway council has endeavored to preserve the former railbed for recreational use. Kearley's original journey, combined with his current commentary, impresses the importance of this protection effort and the road that still remains ahead for its successful preservation.