Reunion Memories: End of an Era 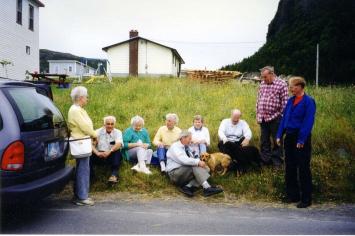 A dozen or so aunts and uncles and an army of cousins celebrated, ate, played, fought and forged lasting memories. However, as the old set of relatives slowed down and a few sadly died, cousins moved out of the province and fewer of us travelled north - until our last great visit in the summer of 2002.

Uncles Myles, Wallace and Dick, along with their spouses, my parents and a few cousins, decided to take a day trip from St. John's to Fox Harbour that summer. It was the old homestead where my grandmother had grown up, and all of that generation had spent summer holidays in Fox Harbour.

I rented an extra-large van and we travelled in the one vehicle; as always when we are all together, everyone was in high spirits. Each uncle was certain that he remembered exactly where the house had stood and each was calling out directions to me. Once arriving in the picturesque town they unanimously directed me to the south side of the harbour. As I followed the directions, my cousin John, the oldest cousin, said quietly, "I think the house is on the other side of the harbo...I helped paint it when I was 14."

Nobody seemed to be listening to him, though, and a friendly argument broke out as each uncle remembered a different location for the house.

I stopped the van and we all got out. My mom, who had not visited Fox Harbour since she was a very young girl, had no idea which house it was; the aunts, her in-laws, did not know either. John again said quietly, "It's across the harbour."

After much fuss as the uncles insisted they were right, I finally got them back into the van and we followed John's hunch around the harbour. John directed me to where he thought the house was: a lot with only a basement still in existence. I stopped in front of it even as the uncles protested and explained why we were in the wrong place. We all spilled out and stood behind the van, all of us excitedly talking and pointing at once.

An elderly gentleman was walking down the road and I approached him.

"Good morning, do you live around here?" I asked hopefully.

"Nope," he replied, so I just smiled and returned to the family melee.

Uncle Myles followed the "old timer" and asked, "Do you know which is the Healy home?"

Overhearing his answer, I protested, "You told me you didn't live around here."

"Don't. Moved last year to be with my daughter in Bay Bulls."

So we walked up to the site, took pictures, and reminisced for some time before finally headed to our favourite day-trip restaurant destination: The Captain's Table.

It was our last great trip. We still visit the area, but the loss of uncles Wallace, Dick and Tom (he did not make that Fox Harbour trip) and cousin John has added to the sense of loss with each subsequent trip.