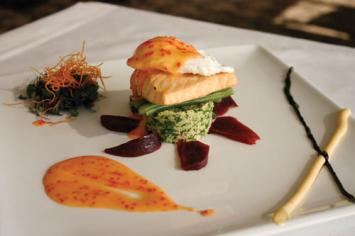 When I was growing up in rural Newfoundland and Labrador in the 1970s, fishing for trout was a favourite activity. We had no video games or satellite TV to entertain us back then, but the skill required to catch a trout and fight it to shore made for real excitement - more than any gaming console could ever hope to capture.

Trout, a member of the salmon family, are also one of the most delicious freshwater fish in the world. As a youngster I preferred catching trout to eating it, yet over the years I've developed a taste for this mild-flavoured fish.

When cooking trout, it is important not to over-season the fish. Too much spice will overwhelm the lovely, delicate flavour. The traditional cooking method, in my mind, works best: dredge the trout fillets in seasoned flour and pan-fry in oil on a high heat. This will cause the skin to become crispy (if you use low heat, a fatty fish like trout will absorb the oil, affecting the taste and texture).

Another great way to cook trout is by poaching it - a healthy alternative to the traditional pan-fry method. Here is a recipe for poached trout that can be used as a dinner appetizer or a main course for lunch. Enjoy!

Combine water, wine, celery, carrot, green tea, parsley, bay leaf, peppercorns and salt in a large saucepan. Bring to a boil, reduce the heat, cover and simmer for 10 minutes. Add trout and simmer, partially covered, for 10 to 12 minutes or until fish flakes easily when tested with a fork at the thickest part. Garnish with lemon slices and serve with mint couscous.

Prepare couscous according to package directions. When done, fluff couscous with fork and add remaining ingredients. Stir very gently with a fork and serve with poached trout.