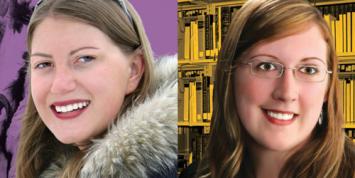 Vanessa Webb (left) of Nain, Labrador and Julie Bull from Happy Valley-Goose Bay, Labrador will finish up their official terms as role models for aboriginal youth across the country in June.
By Ashley Colombe

When she isn't in school, playing sports or volunteering, 17-year-old Vanessa Webb enjoys activities not typical of a teenage girl: hunting, trapping and fishing at her family's cabin about 30 miles north of her home in Nain, Labrador. But then Vanessa is not your average teenager. A proud member of the Inuit community, respect for her culture and its traditions compels Vanessa to do her part to keep it alive.

"I go off to my cabin a lot with my dad. He knows about the land and he teaches me to hunt and trap. He knows a lot about the Inuit culture and he passes that on to me," she says. "I think it's really important that I learn and try to preserve it."

Last June, Vanessa was recognized formally for her achievements and effort in bettering the lives of people in her Inuit community. The National Aboriginal Health Organization (NAHO), which runs the National Aboriginal Role Model program, selected Vanessa as one of 12 individuals (chosen from more than 150 candidates) to be role models for the 2007-2008 year. The program, which has existed since 1984, celebrates the accomplishments of First Nations, Inuit and Métis youth aged 13 to 30. All the program's role models set extraordinary examples meant to inspire other aboriginal youth to strive to reach their goals. Vanessa, a Grade 12 student at Jens Haven Memorial School in Nain, has a long list of accolades for young people to aspire to. Vanessa is the Nain representative on the Rising Youth Council in Nunatsiavut, a peer mediator at her school and captain of her female hockey team.

She is also a founding member of a group that is very close to her heart. Last October, Vanessa and three other young people formed a suicide prevention group called Sikinik Niluituk - the Inuktitut word for sunrise. "It represents a new day, a new beginning, a fresh start," she says.

"There have been a lot of suicides in Nain," says Vanessa, who's lost family members and friends to suicide. "It's a really touchy subject for a lot of people here because we can closely relate to it. But we realize that it's a problem and it needs to be more noticed."

During the last year, Vanessa has given formal talks to aboriginal youth about the role model program and about inspiring young people to achieve their dreams like she has. Vanessa was recently accepted at Memorial University, where the young athlete plans to pursue a degree in physical education. A lover of sports, she says she can't imagine doing anything else with her life.

Vanessa believes it is critical for aboriginal youth have members of their community to look up to. "Aboriginals aren't always looked at in a positive way," she says. "So this program is really important because it does actually show positive things...something the younger ones can look up to."

Julie Bull of Happy Valley-Goose Bay, another of this year's aboriginal role models, agrees. "A lot of stereotypes and media portrayal is so negative and racism still happens," she says.

"I'd like to think that having other aboriginal youth be the role models is better because (the youth) realize it's not just white people or it's not just famous people - it's real live people who went through the same things, who've managed to take that and embrace it and do something positive with it." Like Vanessa, Julie focuses her efforts on bettering the lives of aboriginal people. The 24-year-old member of the Labrador Metis Nation is completing her master's degree in applied health services research at the University of Prince Edward Island. During her graduate studies, she has focused on the ethical governance of research in aboriginal communities. She has heard what she calls "horror stories" about medical studies in those places.

"(Researchers) take samples - whether it's hair samples or blood samples - and suddenly (the people) see the published work in various magazines or books that had nothing to do with the original proposed research. So people often feel exploited," says Julie.

"I really believe that research should be done that benefits the community. It shouldn't just be a benefit to the person doing the research. And I think my master's thesis is a good example of how that can work. I was in collaboration with the communities from day one; it was actually (community members) that wanted this kind of research done," she says of people in Goose Bay, Sheshatshiu and Natuashish - the three communities in Labrador where she collected her data.

Despite her accomplishments and extensive work with aboriginal communities, Julie insists she was surprised even to be nominated for the role model program.

"I never really thought of myself as a role model," says Julie. "I think everybody wants to be that person who is inspiring to other people, but I never thought I already was that person."

During her year as a role model, Julie has given presentations to youth in Labrador and in Prince Edward Island. She reaches them by talking about challenges she's had to overcome in her own life, such as growing up in a single-parent home and struggling to fit in as a teenager. Like Vanessa, she also feels it's important to preserve aboriginal traditions and culture - and she's helping implement that preservation.

Since Julie met with aboriginal youth in PEI for the first time a year ago, she's become more involved in their communities. At a recent event at the University of Prince Edward Island, which saw youth from aboriginal communities come together in a celebration of their culture and traditions, Julie realized just how much influence she and the other role models have had on young people.

This June, Julie and Vanessa's official term as "role models" will come to an end (indeed both are members of the selection committee that will decide who the next 12 aboriginal role models will be). With their formal responsibilities wrapping up, both Julie and Vanessa are poised to continue the work they've done as emerging leaders in the aboriginal community.