Summer on the Coast 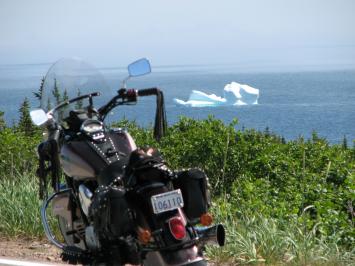 Iceberg in the Strait of Belle Isle
By Rannie Gillis

"I'll tell you, Rannie, we don't get many icebergs in Manitoba!" declared an excited Glen Crawley, a prairie farmer from the small prairie village of Minnedosa. He had just taken several photographs of his first-ever iceberg, on this his first morning in southern Labrador. Equally thrilled was his best friend, Dave Sjoberg, a businessman from Winnipeg, Alberta, who was also making his first visit to Newfoundland and Labrador.

We were on the outskirts of L'Anse-au-Loup, a small fishing community of about 600 individuals on the Labrador Straits. We had just come around a bend in the road and there in front of us was the nicest little iceberg you ever saw. The fact that we had just emerged from an early morning fog bank into brilliant sunshine only added to the sense of this special occasion, and the sight of this glistening mass of frozen water had set everybody's pulse racing.

"Rannie, if we turn around right now and head for home, I would say that this has been one of the best days in my life, certainly one of the best motorcycle days," declared Glen. "What do you think, Dave? This is fantastic!"

It was not only Glen and Dave, the "Prairie Boys" as we called them, who were excited. The other three members of the little group I was leading were also making their first trip to the Labrador Straits. None of them had ever seen an iceberg before, and to see one this close to shore only added to the satisfaction of this unique moment.

Our party of six intrepid bikers had been planning this expedition for more than six months. Glen, who had married a girl from my hometown of North Sydney, Nova Scotia, had often biked with me around the back roads of Cape Breton Island. More than once he had expressed an interest in exploring parts of Newfoundland and Labrador by motorcycle. He often said that he would like to drive his Harley-Davidson from Manitoba to Newfoundland.

However, for a prairie farmer the summer months were just too hectic to even consider the prospect of driving almost 5,000 kilometres one way, and then facing the daunting prospect of driving back across Canada. In the end he made a compromise. He and his friend Dave flew to Halifax, rented two Harley-Davidsons from the Vinland Motorcycle Tour Company, then met up with the rest of us in North Sydney.

In addition to the Prairie Boys, our group included Charlie MacMillan and Howie Allen from North Sydney, and Robin Taylor from Halifax. All were very capable motorcyclists with many years of touring experience under their belts. Nonetheless I had to remind our western bikers to bring tie-down straps for their motorcycles, as our travels would include four ferry crossings (return trips between North Sydney and Port aux Basques, and St. Barbe and Blanc Sablon).

We had arrived at the Labrador ferry in St. Barbe the previous morning, after a two-day dash up the west coast of Newfoundland. After an uneventful 90-minute crossing, we sailed into a thick fog bank just as we approached Blanc Sablon, on the Quebec north shore. The boys were disappointed, but they had been forewarned about this possibility and dutifully put on their rain gear, as we were told to expect heavy rain once we got ashore. I suggested that we also use our emergency flashers on this stretch of highway, as motorcycles are very difficult to pick out in thick fog.

Shortly after noon, our little convoy arrived at the Northern Light Inn at L'Anse au Claire. After a quick lunch, we checked into our two housekeeping cottages and promptly fell asleep, exhausted from our hectic 230-kilometre drive earlier that morning.

The rain and thick fog persisted into the late evening, making it impossible for us to take an exploratory drive. However, when we went to the dining room at the inn for supper, the boys experienced their first real taste (literally) of Labrador hospitality.

I had been telling them on the ferry just what a delicacy a feed of roast caribou was, but I had not told them that caribou was usually only served to bus tour groups. However, as we crossed the road to the inn from our cottages, I did take notice of a large tour bus in the parking lot.

When the charming waitress arrived to take our orders, several of the boys expressed disappointment that there was no mention of caribou on the menu. I then informed her that five of these guys were making their first trip to Labrador, and two of them had come all the way from Manitoba. With that, she disappeared into the kitchen to see if there was any caribou left over after the tour bus passengers had been fed.

There was, and we enjoyed a wonderful meal of roast caribou, with apple pie and ice cream for dessert. We left our lovely server with a substantial tip from all at her table!

This was my fifth motorcycle trip to the area, and the Prairie Boys especially had been interested in what kept bringing me back. It was easy to explain.

Southern Labrador has much to offer any inquisitive visitor. Where else, in a distance of less than 80 kilometres, can you visit North America's oldest funeral monument (L'Anse Amour); examine the earliest industrial site in the New World (Red Bay); and see the rusting remains of a First World War-era British battle-cruiser, the former pride of the Royal Navy (Point Amour)? The last location is also home to the tallest lighthouse in Atlantic Canada, a 33-metre tower that now houses a fascinating little museum. But as intriguing as these sites were - and we visited them all - the main reason for this trip was to experience the unique thrill of riding a motorcycle along the Labrador Straits. Nowhere else in North America, with the possible exception of Alaska, can you experience such sights. Vast treeless barrens that sweep off to the horizon alternate with magnificent glacial valleys gouged out of the rock-strewn landscape. For two sunny days, in both Labrador and Quebec, we rode through areas of primeval wilderness that have remained essentially unchanged since the last glaciers melted more than 10,000 years ago. Every bend in the road revealed something dazzling to the senses! A snapshot from the bikers' Labrador travels

What more could we experience?

Well, shortly after our last supper at the Inn - where we were treated to more caribou - the manager, Chad Letto, arrived at our cabins with a Northern Light Inn baseball cap for each of us. He also produced a plastic bag of ice. Not just any ice, mind you. A friend of his had chipped this off an actual glacial "bergy bit" (piece of iceberg) that had come ashore.

In a fitting toast to our unforgettable adventure, we celebrated our successful Labrador outing by mixing our evening drinks with 10,000-year-old ice. It doesn't get any better than that!