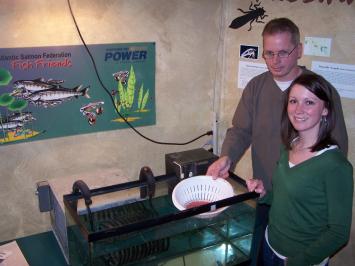 Carolyn Power and Robert Piercey are environmental educators with the Fluvarium in St. John's. They are standing next to an incubator holding the Fluvarium's store of salmon eggs, or roe.
The Fluvarium and the Atlantic Salmon Federation are partners in a special annual program offered to school children called "Fish Friends." This year, 2009, approximately 17 schools on the Avalon Peninsula are taking part in the program, sponsored locally by Newfoundland Power.

Fish Friends is designed to educate and inform children about the importance of conservation and protection of the Atlantic salmon. During the early part of March, the schools are given about 120 salmon eggs in incubators for their classrooms. The children "raise" the eggs until the early part of June, by which point the salmon have entered the fry stage. The students bring the fry to the Fluvarium and release these "baby salmon" into the river. The purpose of the release is not to try to reintroduce the salmon, but rather to teach the children about the lifecycle of the fish.

With 17 schools taking part this year, that's about 2,000 fry being released. It sounds like a lot, but the unfortunate reality in nature is that salmon eggs have only a 1/16th chance of survival to adulthood (or 125 salmon from those 2,000 fry).

To find out all about the nature of trout, see the May issue of Downhome.