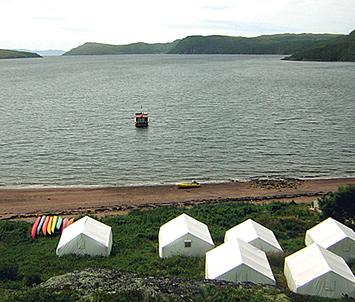 Newfoundland Coastal Safari's luxury wilderness adventure tent camp in Fortune Bay
The following are three amazing adventures you can take right here in this province. For more information, or to arrange for your own adventure with these companies, click the link following each description.

Retreat Outdoors
This is a great outing for those who want to get away from it all. Newfoundland Coastal Safari in Harbour Mille brings small groups to Tickle Beach, a remote location 2 km inside the Long Harbour Fiord in Fortune Bay. Located here, the company claims, is the only luxury wilderness adventure tent camp in Atlantic Canada. Newfoundland Coastal Safari promises gourmet cuisine and, of course, tons of adventure (hiking, sea kayaking, fishing and sightings of wildlife, whales and icebergs are all on the itinerary). The company offers two vacation packages, including getaways for five or eight days. And there's no need to worry about packing food or bringing gear for fishing and kayaking - it's all provided for you. www.coastalsafari.com.

Go Caving
Explore Newfoundland Inc., an adventure company located in Steady Brook, Newfoundland, offers "Cool Caverns" tours - journeys deep underground through the Corner Brook caves. During a typical tour, you'll enjoy a scenic hike through the Corner Brook gorge before embarking on a 1-km spelunking (ie. "caving") adventure. You can choose to explore wide-open caverns or crawl through tiny crevices and climb vertical walls. (The tour guides will customize the journey with your appetite for adventure in mind.) You'll also learn about the geology of the rugged limestone caves, carved by the Corner Brook Stream over thousands of years. The three-hour tours are offered year-round; with the shelter of the rock walls, this is one activity you can enjoy without much affect from the weather! www.explorenewfoundland.com. Dive Deep
The lapping waves of the vast Atlantic Ocean are a sight to behold. But have you ever wanted to go beneath the water's surface to take in the beauty under the sea? Conception Bay South, Newfoundland, is home to a national award-winning dive centre and adventure resort. The experienced diving instructors at Ocean Quest can introduce you to diving during a "Scuba Discovery" session in their indoor pool. If you want the real thing, they also offer recreational, technical and professional courses to prepare you for diving in the ocean. Once you're prepared, Ocean Quest can lead you on an excursion to the historic Bell Island shipwrecks on the ocean floor. www.oceanquestcharters.com. Time Well Wasted
Are you looking for adventure in Newfoundland and Labrador? Exciting activities are literally at your fingertips, with several of the province's best adventure-tourism businesses listed together on one Web site. Whether you're looking for a day-trip or a week-long getaway, there's something for everyone in this "Guide to Adventures" - from the kids to the grandparents, and for all those who like to add a little extreme thrill to their vacation. www.guidetoadventures.com.