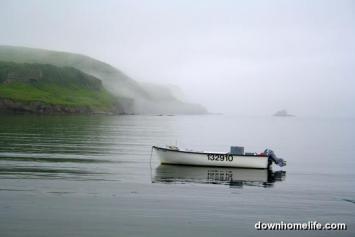 Fog creeps up on this fishing boat in Coomb's Cove, Newfoundland. Aiden Mahoney photo.
In the April issue, Kelly Davis talks to experts about one of Atlantic Canada's most common weather conditions: fog. Here is a collection of interesting facts about fog you won't find in the magazine, along with beautiful, mystical photos sent to us by readers.

Fog Fact: The foggiest place in the world is the Grand Banks, off Newfoundland's eastern shore. This is where the cold Labrador current, coming from the north, meets the much warmer Gulf Stream from the south and creates fog. The foggiest land areas in the world are Point Reyes, California and Argentia, Newfoundland and Labrador, both with more than 200 foggy days a year. Fog Fact: Pulitzer Prize-winning poet, Carl Sandburg (1878-1967), wrote a poem called Fog - "The fog comes on little cat feet. It sits looking over harbour and city on silent haunches and then moves on." Fog Fact: In the early days of navigation, "foghorns" were actually humans manually ringing large bells to warn ships off the rocky shores. Robert Foulis, a Scottish immigrant who'd relocated to Canada, came up with the idea of using steam to power a large whistle that would alert ships. The first foghorn was installed at Partridge Island, Saint John, New Brunswick, in 1859. His design included a way to make individual foghorns bleat different combinations of tones, so that a captain could identify which harbour he was near, even when he couldn't see it in heavy fog. Fog makes a fitting backdrop for the lighthouse at Rocky Point, Harbour Breton - a testament to how necessary these beacons of light are in this province. Michelle Stewart photo.

Fog Fact: The tiny droplets of water that make up fog are so small that it would take seven billion of them to make a single tablespoonful of water. Fog Fact: You can simulate the formation of radiation fog. Fill a bottle one-third full of very hot water. Add a few drops of isopropyl alcohol. Alcohol vaporizes rapidly, letting you see the fog form more quickly. Place a piece of ice over the bottle mouth. Observe what happens near the neck of the bottle. Fog Fact: Fog can be a killer when it comes to transportation. Notable examples of accidents due to fog include the July 28, 1945 crash of a B-25 Mitchell aircraft into the Empire State Building in New York City, and the July 25, 1956 collision of two ocean liners, SS Andrea Doria and MS Stockholm. The worst accident in aviation history occurred in the fog when two Boeing 747s collided in 1977 in Tenerife, the largest of the Canary Islands. One 747 had clearance to taxi down a foggy runway; the other could not see any distance down the runway when the captain decided to take off without proper clearance.