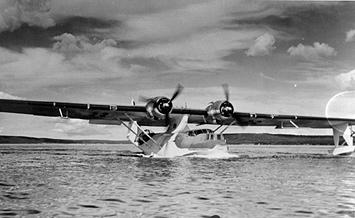 
My first visit to Newfoundland was in 1941. I went to Botwood to work on a damaged flying boat. The Canso flying boats were a common sight at the air base in Botwood and were used as German-sub chasers during the Second World War.

In 1941, three Canso flying boats broke their moorings in a storm and were damaged. They sank and their hulls filled with salt water. Two craft were shipped to Dartmouth to the Blank Ruse repair depot, where I worked at aircraft wiring. The third had been partially taken apart, but later it was decided to repair it at the base. I was sent to Botwood to check the electrics.

At the time, I was a 25-year-old farm boy with limited knowledge and no help, looking at a big job. But I had worked under a good teacher, my crew chief, on the two Cansos in the repair depot. I had all new hull wiring flown in and I had help installing the new wire from a chap working on air frame.

When my job was finished, the aircraft was flown back to the Blank Ruse depot for final repairs and paint job. I was given the co-pilot's seat on that flight and even took the controls for half an hour.

Unfortunately, this seaplane's career did not have a happy ending. It was put into service at Eastern Passage (Dartmouth), Nova Scotia. The take-off lane began at Eastern Passage but continued in Halifax Harbour. It seems that the aircraft was in the first stage of take-off and as it tried to gain altitude to clear a tug in its path, one motor died and the aircraft dropped. A wing was torn off on impact with the water and the hull sank in the harbour. All crew members aboard, except one engineer, drowned; I only knew the survivor by his nickname, Wimpy. It took many divers to recover the victims. The aircraft itself was never raised and is still at the bottom of the harbour.

Do you have special memories about central or southern Newfoundland? Scroll down and click "Downhome Memories" under Submissions and share them with us.