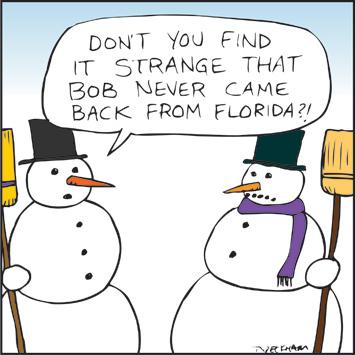 Tim says, "...to write a joke, I find some truth about something - 'snowmen melt,' for example..."
April Fool's Day gives licence to practical jokers of all sorts to embarrass their more gullible friends (and enemies). Whether or not I instigate or fall for an April Fool's gag, every year this tradition reminds me that a good joke contains a balance of truth and pain.

I first heard this description of humour from cartoonist Tim Peckham, who finds inspiration for his jokes in everyday truths and painful realities. Tim is the creator of the cartoon series "TimWit," which ran in the Toronto Sun newspaper in the 1990s. I used to read the Sun when I lived in Ontario, and I always enjoyed the subtle humour of "TimWit," not knowing that the creator was from "down home." I was surprised and delighted when Tim contacted me and offered "TimWit" to Downhomer, free of charge (important for our budget in the early days). We ran two cartoons each month, and they were a wonderful addition that was appreciated by our readers.

Tim and I spoke on the phone recently, and he explained his philosophy of humour in more detail. "There are two types of laughter. One is where people will nod their heads, clap their hands and say, 'You got that right!' That's a response to a joke heavy on truth. The other is a response to a joke heavy on pain. It's a violent outburst of laughter. The best joke has both, an even mix of truth and pain," Tim said. He added, "To write a joke, I find some truth about something, 'snowmen melt,' for example, then figure out a way to present that truth in a painful way. Maybe, give the snowman a hairdryer. Show him with no head. His friend asks, 'How's the new hairdryer?'" Tim believes that pain is an important ingredient because laughter is a sound we make when we realize we narrowly missed some terrible fate. "Remember in school when someone made the mistake of calling the teacher 'Mommy'? It's funny because it wasn't you," he told me.

Tim's parents, Judy (nee Garland) and Jim Peckham, were childhood sweethearts who eloped in 1958 (when Judy was 17, and Jim was 19 and two years into an air force career). The couple moved to Nottingham, England, where Tim was born, their first and only child. Later the Peckhams lived in Summerside, P.E.I., and Petawawa, Ontario, before moving to Winterton, Trinity Bay, where young Tim started fourth grade. By that time Tim was already drawing cartoons.

"Even before I was school-age, I was analyzing the newspaper comics," he said. "I remember understanding where the artist's pen stroke started and ended by the thickness of the line. I was passionate about learning how to do this. I gave it some effort."

His earlier drawings were copies of known characters such as Yogi Bear, but over the years Tim taught himself the finer points of cartooning. "Once I spent a whole day drawing hands. I was learning the symbols of cartooning, like learning the ABCs. A 'hand' is not a 'realistic hand' but a symbol of a hand. The symbol for 'door' is a rectangle and a small circle...for the doorknob, of course."

The Peckham family moved to St. John's while Tim was in Grade 11. After high school Tim attended Memorial University. There he created a weekly cartoon called "Captain Leisure" for the Muse, a university student publication. It was while working for the Muse that Tim developed an interest in page layout and design.

After university, Tim travelled across Canada before finally settling in Toronto. At that time the Financial Post, which was owned by the Toronto Sun, was going from a weekly to a daily paper. Hoping to get a job in layout, Tim began working in the Sun's mailroom, to "get his foot in the door," as his father advised. Several weeks later, on February 29, 1988, Tim became a layout composer for the Toronto Sun.

It wasn't long before Tim's artistic ability was discovered, when some graphic art was needed in a layout and Tim did the drawings to illustrate the story. Soon, the paper was using Tim's editorial cartoons whenever the regular cartoonist, Andy Donato, was away. For many years the Sun ran regular "Punch" magazine cartoons and they were about to be discontinued, so Tim submitted some of his cartoons for consideration. They were accepted, and "TimWit" was born. His funny drawings ran five or six times a week for six years.

Three years ago, Tim and his wife Natalie, who married in 1990, were blessed with a son, Leo, who is the delight of Tim's life. He says he can't wait to get home from work to be with his son. Although his family now takes up too much time for him to create "TimWit" on a daily basis, he still does some editorial cartooning and graphics work for the Sun.

I haven't seen any of Tim's editorial cartoons, but I'm sure they have the proper balance of pain and truth so they tickle funny bones the way "TimWit" did.