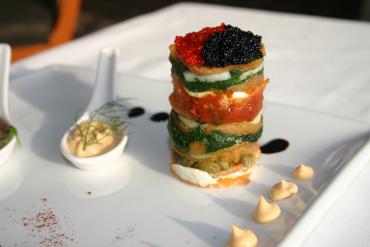 Preserving foods by smoke-curing is a prehistoric practice discovered by our early ancestors. People in cultures the world over have relied on the smoke-curing of fish and meat products for long-term storage. Before there were refrigerators and deep freezes, smoking was a way to ensure a longer supply of protein throughout the year. In spite of our modern appliances today, many of us enjoy smoked products for their delicious, unique flavour.

In Newfoundland and Labrador we often see such delicacies as smoked cod and kippers (a favorite of my Dad's). However nothing beats that culinary classic, smoked salmon. Here is a recipe for smoked salmon parfait that I think you will like.

Drain the sour cream overnight in a cheesecloth-lined sieve; mix dill into sour cream. Rub canola oil on the inside of the pastry ring and place the pastry ring in the center of a decorative serving platter. Fill the bottom of the ring with thinly sliced smoked salmon, layering evenly. Spoon a thin layer of dill cream onto the salmon. Top with an even layer of salmon caviar, being careful not to break any of the eggs. Top with more dill cream. Finish with a layer of black caviar and dollop with dill cream. Chill in ring for 1 hour or more before serving to allow parfait to set. Remove the ring carefully and garnish the top of the parfait with sprigs of dill. Use watercress leaves and crisp bread to garnish the platter. (Serves 6 to 8 appetizer portions)

Smoking tips
Backyard smokers built with bricks and mortar, or special barbeque smokers, are becoming popular for preparing dinner. Here are some things you should know before you start smoking.

• Any fish can be smoked, but oily species such as salmon and trout are recommended, because they absorb smoke faster and have better texture than lean fish, which tend to be dry and tough after smoking (making them look less appetizing as well).