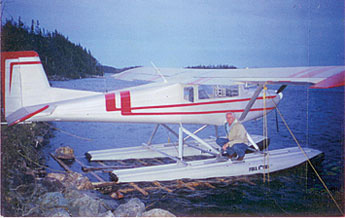 Ivan LeDrew stands on the float of Dolly's Tolerance, the airplane he built and named for his wife.
Like many Newfoundland communities before Confederation, Traytown had no electricity when Ivan LeDrew was growing up there. Most houses had a radio powered by a special battery that had one section to supply the necessary voltage, and a second section that lit up the electron tubes (unlike transistors, tubes need to be heated to operate). Sometimes one section of the battery went dead before the other, rendering it useless so it was discarded.

Ivan, however, was born with a natural curiosity about how things work. This led him, at the age of 12, to dismantle a dead radio battery. Young Ivan knew nothing about electronics at the time, but the discoveries he made from this and other battery dissections steered him towards a successful career in electronics and the means to reach his ultimate dream: building and flying his own aircraft.

When Ivan took apart his first battery, he didn't know that one section put out 45 volts and the other only 1.5 volts. It cost him a flashlight bulb to find that out, but it didn't dampen his enthusiasm for exploring. Using the lower voltage section of the battery, he designed an electric lamp with cardboard reflectors, making his bedroom one of the few indoor places in Traytown illuminated by something other than a kerosene lamp.

In 1956, at the age of 20, Ivan became a radio operator, a job that would introduce him to the world of light airplanes. Ivan joined the VOCM radio network in 1965 as an engineer, eventually working his way up to chief engineer. He encountered aircraft in a minor way at that time, as VOCM had a contract with the flying school to broadcast airborne reports from as far away as Terra Nova National Park.

These flying experiences led Ivan to enrol in flying school in 1974. That same year he turned his part-time sound installation business, Audio Systems, into a full-time venture and he left VOCM. He quickly learned that making a new business successful requires intense focus, you don't have time for hobbies. So Ivan gave up flying.

Twenty years later, with the company running well, Ivan dug out his original flying log book and started training again. He also decided to build his own airplane.

The "Murphy Rebel" kit, which arrived at his home in January 1996, was a large plywood crate with a price tag of $21,500. Inside were aluminum panels, framing parts, all manner of bits and pieces, and two large instruction binders.

The kit did not include the engine, alternator, starter, carburetor, stainless-steel exhaust system, gauges, floats, VHF communications system, wiring or control panel (dashboard), and a host of other things. Ivan had to acquire and install all these. The control panel (including the wiring harness) was his own design. Three years, 22,000 rivets, 1,500 hours and $65,000 later, the "amateur home-built" class aircraft was ready for the big test. In 1999, on a sunny June day in Deer Lake, Ivan took off from Gull Pond in his float-equipped Murphy Rebel with veteran pilot Bruce Rose beside him. They flew up into the sky without the slightest hitch.

On November 6 the following year, Ivan had two other reasons to celebrate. On that date he turned 65 and flew solo for the first time. He went on to earn his recreational flying licence with a floatplane endorsement, allowing him to solo-fly his own creation.