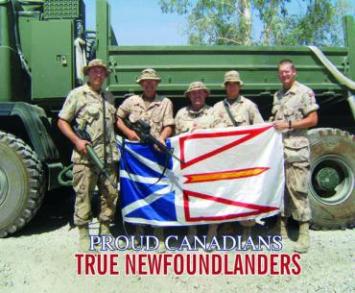 Here we are, a bunch of Newfoundlanders. All five of us are from different parts of the island but, like many before us, we find ourselves working together far from home. We are here in Afghanistan...not because the military made us come, but because we volunteered.

We joined the 3CSU from Montreal to come here on the Rotation Support Assistance Team (RSAT). The only thing we Newfies have in common with the French is that we both pronounce the number three as "tree." We are all Supply Techs from different bases across Canada. We risk our lives here every day in Afghanistan, just doing our jobs; for each of us our weapon of choice is a C7 rifle and we have it with us 24/7. We work in 45-55 degree (Celsius) weather all day, counting stock that ranges from toothpicks to tanks. Many days are spent inside sea containers that can get another 15-20 degrees hotter.

The living conditions are not that bad if you don't mind sharing one huge tent with 200 soldiers. You do have the privacy of a 12 x 8-foot room within that tent, with two bunkbeds, four people and all their kit. It's best to have your drawers marked, or you might find your roomie wearing them! Outside our tent, there are 10 portable toilets and a small mec-shelter with five showers and sinks.

So far we've seen four trees and 10 blades of grass. The only water we've seen is the sacred poo pond. The camp has been on a fuel restriction every week but one since we landed here in the middle of June, so we have to walk (weapons in hand) about two kilometres to and from work every day for meals at the mess. If the winds are blowing northwest, we get the undesirable whiff of the poo pond, which usually occurs right at suppertime. But that doesn't stop us from heading out to the ball hockey rink for our weekly game, or to the boardwalk for a good cup of Timmies. I'm sure you've heard there's a Tim Hortons here (thank God).

LS Young is the oldest of our group at the ripping age of 45, but somehow he has spent the least amount of time in uniform. Five years ago he found himself unemployed for the first time. He decided to join the military, even though he was 41 years old, and did the tests alongside men and women young enough to be his children.

Even as his family and friends were telling him he was nuts to enlist, he took off for basic training and in a few years he wound up here in Kandahar. All his buddies back home in Halifax call him "Buttons" because he doesn't have any medals, but when he goes back with the General Campaign Star hanging on his chest they will have to find a new nickname for him.

Cpl Haynes joined the army four years ago and is on his third trip to Afghanistan. This time leaving his family behind was a little more difficult than previous deployments because the day before he left, he found out his fiancee is pregnant with their first child. Cpl Ryan still has a network of family and friends in Turks Cove as well as Greenwood, and Cpl Simms has a wife and children waiting for his return home to St. John's.

I joined the forces in 2001 right after high school, becoming a reservist in 36 Service Battalion, St. John's. I transferred to the regular force in 2003. This is my second mission; I spent six months in Camp Mirage in 2005. I have family and friends I miss back in Conception Bay South and a fiancee, Tarra, at home base in Winnipeg.

So this is who we are, and here is our message: To all the soldiers past, present and future, we offer our thanks for their sacrifices and dedication. The job for us is almost done, as we will be heading home over the next few weeks, back to our respective wings and bases. We had just a couple of months here, which is nothing compared to the soldiers who train, often away from home, and then come here for six to nine months in the conditions described to you earlier. It is them who we salute and wish a safe stay in Afghanistan.

We would also like to thank Downhome, Newfoundlanders and Labradorians, and everyone in Canada who have been supporting the troops. It may seem like a small thing, but the banners from the schools, the letters and postcards, and everything else sent here from Canadians who support us in our mission, are proudly hung all around camp. Whenever a soldier has a bad day (and it certainly happens), no matter where they go here in Kandahar Air Field or out at one of the Forward Operating Bases, they have those banners and posters signed by thousands of Canadians of all ages to remind them why they are here.

As for us five, we are proud Canadians and true Newfoundlanders.

Editor's note: Cpl Upshall wrote this piece during his recent stint in Afghanistan. In September, he and his army buddies finished their tour and returned safely to Canada.
MORE ARTICLES
load more