It Seemed like a Good Idea at the Time 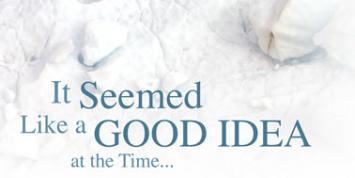 It was Sunday, March 17, 1956 - a beautiful, sunny St. Patrick's Day on Bell Island. My family was enjoying a dinner typical in most Newfoundland homes at the time - corned beef and cabbage with all the trimmings. As we finished our meal, Dad asked us what our plans were for the afternoon.

We never actually planned anything on Sunday - it was always just a fun day. I went outside to meet up with some friends and we took a walk down towards the "flat rocks" part of the island. Conception Bay that year was full of Arctic ice. In the distance, about 12 miles away, we could see Harbour Grace and the fishing villages that dotted the shore to the west of Bell Island.

I made a spur-of-the-moment suggestion to the boys: "Let's walk over the ice to Harbour Grace, pick up an ice cream and be back before dark." They all agreed, and the nine of us started out around 1:30 p.m.

The ice was packed tight, which made travelling easy at first. But by 4 p.m. Bell Island had gotten farther away, while Harbour Grace did not seem to be getting any closer. The sun was beginning to set and we needed to consider our position. We held a quick conference and one of the boys, Gord, decided to head back to the island with his younger brother and two others.

I, for lack of brains, decided to continue along with four of my more adventurous friends. All was going well until about an hour later. It was dusk and with the tide changing, we began to see open water. The walk became much less fun - especially when we had to detour around some large openings in the dark.

We'd been on the move for about 10 hours and were starting to get hungry when we finally touched dry land. Although we didn't know where we were, we were happy to be off the ice.

After walking another half-hour, we topped a ridge and saw lights in the distance. It was a house, and when I knocked on the door it was opened by a little old lady. Behind her a gentleman sat at a table. She asked if we were okay and where we were from. I guess by then we were a rough-looking bunch. I told her Bell Island, and asked if we could use her telephone. By then the old gentleman had come to the door and he invited us in.

He and his wife set the table and got the kettle boiling. Then they fed us potted meat sandwiches, Jam Jams, and apricot and raisin squares.

Realizing it was around 3 a.m., the lady said, "You'd better call your parents on Bell Island." I made two long cranks and one short on her phone and got the Harbour Grace operator, who asked "Are you the boys that were lost on the ice?" as she put my call through. I told the operator, "No, we were never lost."

The first question Mom asked was "Where are you?" I turned to the lady who told me we were in Harbour Grace South. Then Mom asked if all of us boys were safe, and I told her yes. The others who'd turned back made it home safely, she said, then added, "Your father is going to kill you when you get home."

After I hung up, a knock sounded at the door. The lady opened it and standing there were two RCMP officers. They came in, looked us over and asked who was the oldest. I admitted it was me. The officer in charge took me by the shoulder and said if he had his way, I'd be spending the night in the Harbour Grace jail. They bundled all five of us in the back of their cruiser and took us to Pikes Hotel in town. We didn't have 50 cents between us, so we called our parents who wired us $10 each the next morning. Meantime we bedded down in the big hotel for a few hours.

After breakfast, the two Mounties came and escorted us to the bus station, where we boarded the bus to St. John's. Around 10 a.m. we arrived in Torbay, where arrangements had been made to fly us by private plane over to Bell Island at 2 p.m. We were a sorry-looking group that arrived at Neary's landing strip later that afternoon.

Somewhere close to 3:30 p.m., I walked into the house. No one was home but Mom. When I sat at the kitchen table, her first words to me were, "Your father is going to kill you when he gets home."

Dad was working the 8 a.m. shift, which meant he was expected home around 4:15 p.m. As I waited for what I was sure to be my end, I drank lots of tea and wondered how I was going to be sent out of this world. Finally I heard Dad arrive and begin taking off his pit boots - at least I wouldn't be getting a kick from one of them. When he entered the kitchen, he called for Mom to get him a cup of tea, then sat there for a long time without saying a word.

At last he walked over to me, put his big hand on my shoulder and said, "If you ever do that again, keep walking in the same direction."

And that was it.

But over the years he did bring up my foolhardy adventure several times, pointing out how dangerous it was and what the consequences could have been. And so I've learned that the older we get, the smarter our parents get.
MORE ARTICLES
load more