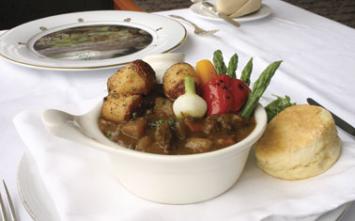 Everyone has a little Irish in them - especially come March, when St. Patrick's Day gives us a great excuse to celebrate the widespread culture of the Emerald Isle.

Thanks to mass emigration in the 19th and 20th centuries, Ireland has exported its traditional food and drink to the four corners of the world. Nothing illustrates this better (besides the seemingly global availability of Irish pubs that sell Guinness) than the ever-popular Irish stew. This filling, flavourful peasant dish has a number of variations, but is typically made with the cheapest, most readily available ingredients. Traditionally, the people of Ireland raised sheep and root crops (like the ubiquitous potato) for subsistence. As well as meat, the sheep provided wool to make warm clothing, and milk for drinking and making cheese.

Irish stew - called "ballymaloe" or stobhach gaelach in Gaelic - was usually made of lamb or mutton (less tender sheep over two years of age), potatoes, onions and parsley. Often only lamb or mutton neck bones, shanks and other trimmings were the sole basis of the stock. Yet these would-be discards still held enough flavour after a long simmering process to create a hearty bowl of stew. The root vegetables added further taste and thickening power, as well as filling sustenance. Some cooks added turnips or parsnips, carrots and barley when available.

When the Irish people began immigrating to North America in droves - entire families were forced to flee the ravages of starvation caused by the potato famine of 1845-49 - they brought along their food traditions. Irish stew was adapted to include local produce offerings. Sheep were not as common as cows, so beef was often substituted for lamb. The recipe also evolved to sometimes include Guinness stout, such as the version I enjoy making.

My Irish stew is a terrific dish with a unique flavour. The Guinness adds a great kick to an already excellent meal, and this version can be made with beef instead of lamb - unless you're a traditionalist like myself. When I was growing up, Irish stew was always made with lamb and served on a Tuesday - not just on St. Paddy's Day. Irish Stew with Guinness

Heat a 6-quart stovetop casserole dish; add the oil and the bay leaves. Cook the bay leaves for a moment and then add the meat. Brown the meat on both sides over high heat. Add the sliced onion and cook for a few minutes until onion is clear. Reduce heat to low and add the garlic, thyme, rosemary and flour, and stir well until smooth. Add the beef stock and stout; simmer, stirring, until the stew thickens a bit. Add the remaining ingredients and cover. Place the pot in a 275癋 oven for about 2 hours, stirring a couple of times. Add salt and pepper to taste before serving.