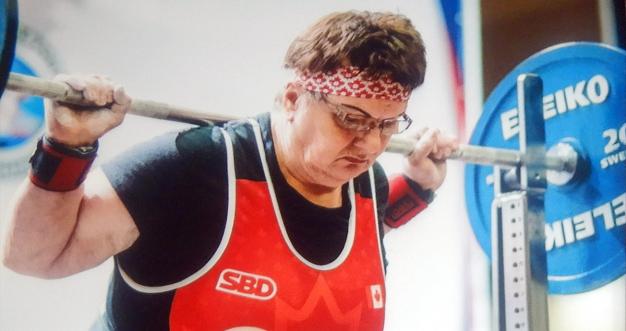 As the November dusk closes in, I stand on the front step of a home in Mount Pearl, NL, ring the doorbell and wait for the approach of an unlikely superhero of sorts, one who has the coolest nickname I’ve heard in a very long time: “The Rubinator.”
When the door opens, I’m greeted not by a deadly serious cyborg from a fictional universe, but by a smiling woman in an official Team Canada jacket. Ruby Koritarov shuns my proffered hand in greeting and good-naturedly chides, “Don’t be silly. I want a hug!” I can tell this is going to be a fun chat already.
Ruby is a young-at-heart 74-year-old grandmother who grew up in Conception Bay North. She is also a two-time world powerlifting champion. In October 2022, she won two World Masters titles at the International Powerlifting Federation (IPF) Masters Classic & Equipped Powerlifting World Championships held in St. John’s. You’d think as an athlete in her 70s that this is the twilight of her career, but Ruby is just getting started.
“Oh no, I only came to working out and powerlifting around 2017,” Ruby says. “I started going to Heavyweights Gym with my husband that year in order to take part in weight-loss programs, and they were successful for both of us. During that time, Tyler Kearney, one of the coaches, introduced me to deadlifting, squats and bench press, and I really enjoyed those exercises. I used to push 415 pounds on a sled in one particular exercise, and I would see all the young people in the gym and joked with the coach and told him my age, asking if I was the oldest one there. When he heard that he said, ‘Good Lord, Ruby, I knew you were very strong, but I didn’t realize you were that old. Let me check on something.’”
That led to another coach, Rob King, suggesting Ruby enter an upcoming competition in September 2017, where she’d be the oldest participant. “So I decided to really train for it and give it my best shot, and I won.” That first win was extra special for Ruby because she went from a broken ankle and crutches in February to “winning an event in a new sport by that September.” Since then she’s competed at 15 powerlifting events, including three provincials, two nationals, the Commonwealths, and the Worlds in Master IV category. And now she’s a two-time world champion.
“Powerlifting is a very welcoming and inclusive sport for people of all ages, abilities, shapes and sizes,” says Ruby. “You have to train hard and you must learn the correct ways to do the lifts, but you compete against others who are in similar categories based on gender, age and your body weight class, so it is always a fair competition.”

The Rubinator
Who crowned her The Rubinator? She smiles. “The younger people in the gym and some of the coaches started calling me that since I am very upbeat and fun around the gym, but all business when I train for competition and do my lifts in contests. They meant it as a compliment and they tell me all the time I inspire them to do their best, which makes me very happy to hear. The way I look at it, and I always say to anyone starting off, if I can do this at my age, so can anyone. The main things are get good coaching, train safely, be smart and realistic about your goals, don’t get discouraged by a setback now and then - and above all, never give up.”
“One thing about Ruby is that she always shows up and gives her best no matter what. She is a very hard worker and hard work pays off,” says coach King via email, adding, “Ruby is a two-time world champion because she is very coachable, shows up, works hard, takes constructive criticism and is always open to learning and improving. She also brings up all those around her, which makes her such an important part of our team. Ruby is one of the hardest working people I have ever coached, and I couldn’t be more proud of her!”
“I never would have believed it when I started out that such a thing was even possible [being a world champion]. But I am not stopping there,” Ruby says. In her category, Ruby says she’s set “eight provincial records, eight national records and 10 Commonwealth records during the last Worlds, and I amazed myself. I really hope to keep training and get back to the Worlds again in a year or two and have a goal to someday set a world record in at least one of my lifts. It is a hard task, but we all need something to keep shooting for at any age.”