Chili When You're Chilly 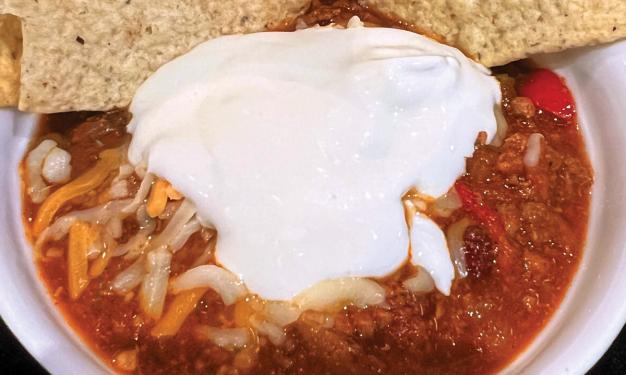 I loves me some chili, I do. I often cook this delicious meal, and there is never a time when I do that someone in the house (maybe even me) will comment on the aroma. The house - or more often than not, the shed, man cave or cookhouse - will be filled with the wonderful smells and promise of a great meal that cooking chili brings.
We always end up bottling the leftovers for down the road. Nothing like reliving that chili experience on those days when you just can’t decide what to have for a meal. And do you agree that the longer chili is in the bottle, the better it tastes?
Have you noticed that many of the recipes found online and in cookbooks often have “Texas” somewhere in the name or description? I’ve read that immigrants to Texas from the Canary Islands arrived with a chili recipe back in the early 1700s when they settled San Antonio. I am certainly happy that someone started it, and now it’s a part of our history of enjoying this wonderful, soul-satisfying meal.
When you look at the list of ingredients here you might feel a little daunted at first. But apart from the kidney beans and/or chili beans, the items needed are pretty common and most will likely have it all on hand. This recipe will easily feed at least six adults, and there may be enough left over for bottling or to enjoy the next day.

In a frying pan, add beef, pork, 1 tsp of the black pepper and 1 1/2 tsp of the salt; fry until browned. Drain the fat.
Add olive oil to a large pot over medium heat. Add celery, onion, and red, green and jalapeño peppers. Sauté for about 5 minutes. Add the meat mixture, tomatoes, tomato paste, garlic, brown sugar, beef broth and Worcestershire sauce. Mix well, then add remaining dry spices, rest of the salt and pepper, and the beans. Give all this a good stir, set the pot back to the lowest heat, cover and cook for at least two-and-a-half hours. Stir the chili at least every 20 minutes to ensure that nothing is sticking on the bottom of the pot. Taste for seasoning after about 2 hours and adjust if necessary to suit your taste.
Once cooked, ladle into bowls, top with shredded cheese and a dollop of sour cream and enjoy! Also goes great with tortilla chips for dipping.

• Meat choice is purely a personal taste preference. Italian sausage removed from the casing is also a nice addition.
• The longer you simmer, the better the development of flavour. Add more beef broth if it starts to dry out. If it ends up too wet in the end, simmer for a little while with the cover off to reduce the liquid.
• Always cook with confidence!