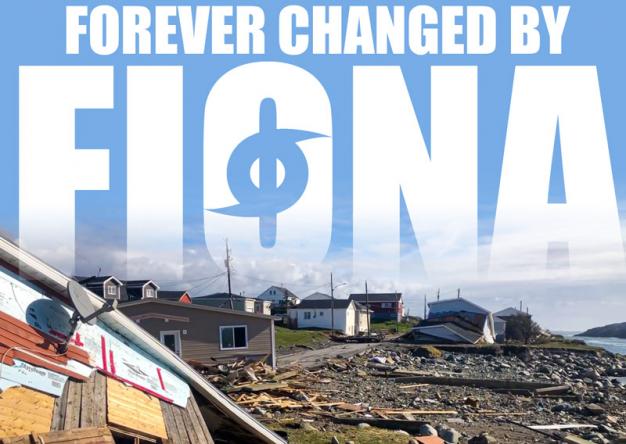 Amid the wreckage from an historic storm, survivors find gratitude, grace, even good humour to help them carry on.
By Pam Pardy

The devastation caused by post-tropical storm Fiona on Newfoundland and Labrador’s southwest coast this fall was numbing. When the sun rose over Port aux Basques, the hardest hit community, on September 25, where boulders and debris scattered throughout the once picturesque town, harsh reality set in. More than 20 homes were completely destroyed and others suffered catastrophic damage. Even more tragically, one woman lost her life. While this is the story of two women who had their lives forever changed by Fiona, it is also a story of courage, kindness, and a love of home more powerful than any storm.

Hurricane turned post-tropical storm Fiona stuck Newfoundland’s southwest coast on September 24, 2022. While it raged, Fiona brought drenching rains, huge waves and a powerful storm surge that washed wharves, stages, sheds and houses into the sea. Fiona also brought strong winds with gusts up to 134 km/h recorded in Port aux Basques. Roofs were ripped off and power was knocked out for many in the region.
Even as angry waves began to pound the shoreline, many Port aux Basques residents remained calm, including 62-year-old Jocelyn Gillam. “We knew the storm was coming. It was on the news all week long,” she says. While not overly concerned, she and her husband David did what they needed to do to prepare.
The evening before the storm, the town’s residents were advised to be ready for a possible evacuation. “We were told to take some personal things, so we took our wedding rings and I took a bracelet my husband gave me when we got married. We brought our rubber gear and rubber boots, and put that by the door so we were ready if we had to leave in a hurry,” she says.
The couple went to bed and in the morning, things seemed fine. “There was a lot of debris on the roads, but nothing bad. The sea was coming up, but it wasn’t raging or nothing,” she explains.
The couple decided to have breakfast and prepare for the day ahead. “I planned to make some soup and do some buns up for my husband, ’cause he’s a bun person, and I looked up and saw my brother-in-law out sitting in his car there,” she says.
She donned her rubber gear and went outside to see what was up. The two chatted briefly, then Jocelyn headed back towards the house.
“I looked out over the sea and I could see the water come in. It was all a wild mixture of colours. It was browns, whites, beiges and blacks, and it was angry - very, very angry looking.”
While the sight of an angry-looking sea held her interest briefly, that was it, she explains. “I said, ‘That’s never going to come up this far,’ so while the sea was rolling it never crossed my mind that it would reach where I was to.” Jocelyn was about to find out how wrong she was.
“I never had one more step took and she [the ocean] had me down on my rear and washed me up under a Jeep. Well, I held onto the bottom of that Jeep and I said, ‘Oh, my God. Somebody help me.’”
At times, Jocelyn was totally submerged under the rushing water. When she was able, she fought for a breath while screaming for help, though she could hardly be heard over the high winds and raging sea. In a moment of clarity, she readjusted her grip to the undercarriage of the vehicle, raised her free hand in the air and motioned wildly for help.
“The water subsided a bit and my brother-in-law was able to see my hand, so then he knew where I was. He came and he yelled and he tried to hold me up over the water, but there was so much force. But he said to me, ‘I’m here. You’re going to be okay. You’re going to be okay.’”
It was “by the grace of God” that others came to check on their property at that very moment, she adds.
“One man wouldn’t be able to hold me with the force of the water, but Newfoundlanders, like we are, we stop and help anybody do anything, and thank God they stopped.”
Jocelyn was stuck. Even with multiple hands pulling, she couldn’t break free. “They tried to lift the Jeep up, but they couldn’t get me out. Then they realized that my coat - my rubber gear - was hooked up in under the Jeep. My brother-in-law tore my jacket off, and then they got me out and took me body and bones, and put me in the back of a car and took me to the hospital.”
Things were touch and go for a while, she adds. Her blood pressure had dropped, she was icy cold and there were concerns about how much water she had taken into her lungs. She was also badly battered and bruised. “There was a nurse at the hospital there that I knew, and being from a small town she knew me, of course. Well, she couldn’t recognize me.”
In the meantime, she said, her husband was still calmly sitting at home waiting for his buns. She laughs now as she thinks about it. “He was just waiting in the house saying, ‘Now where did she go to, at all?’”
Fiona may have taken the feet out from under her, but it couldn’t dampen her spirits. “I banged my leg up pretty bad, but I’m going to heal eventually. But the people that lost their homes and lost everything they worked so hard for, those are the people we need to help out and keep checking on,” she says.

Stronger than Fiona
Krystle Collier and her family are among those that Jocelyn says are in her personal thoughts and prayers. Krystle, her husband James, their eight-year-old daughter Kate and James’ mother Barb are now temporarily living apart, staying with various family and friends since Fiona. While we’re speaking over the phone, Krystle pauses to answer the door. “The military are here because everybody’s been displaced everywhere. They’re checking to see if we need any food or water and they are doing wellness checks,” she explains. “It’s like living in a horror movie, all this is so surreal.”
Krystle’s story is another dramatic tale of loss. Before Fiona, the family resided in the home her husband was born in, and it had survived high tides and storm surges in the past. All the homes in the area had. The evening Fiona struck, Krystle and her husband felt they were prepared, but when the call came to get ready to evacuate, they were stunned.
“That was a hard pill to swallow. Packing and then knowing you had to leave is not something you’d expect,” she says. At first, they went to a neighbour’s house that sat on higher ground. “When we came outside it was very scary. It was still dark and there were things blowing around - big pieces of wood and siding from people’s homes.”
As daylight broke they looked out and couldn’t believe their eyes, she says. “There were literally homes washing into my neighbour’s backyard. They were starting to pile in on top of each other, just like cardboard boxes. We went outside and there were propane tanks everywhere, and there were logs the size of telephone poles just thrown around in my driveway.”
Right away she saw that the lower part of their garage had detached and was completely gone. As her Port aux Basques neighbourhood - including their own home - filled with water and debris, they planned their escape from the area. “We had to get out driving on a road that was completely flooded,” she says.
When they were finally able to return the next day, they discovered their home was unsafe. “We were able to get in and get a few things. But the house? That needs to be demolished,” she says, adding that it could have been worse. “But some people didn’t even get an item of clothing when they returned, so we’re blessed.”
Like Jocelyn, Krystle has kept her sense of humour. On the evening Fiona was set to make landfall, Krystle says she headed out for her storm chips and White Claw - her beverage of choice. “I said, ‘Oh, I’m just going to sit back and let her [Fiona] do her thing, and I’m just going to enjoy myself. So I went and got my six-pack, and I tucked it in the fridge for safekeeping. I was hoping to sit back and have that on Saturday while she was still blowing.”
Hours later, just before they evacuated, her husband saw their refrigerator wash out of their damaged garage and float away.
“The next day after we went back, I was just kind of looking around at the rubble, and there were maybe 10 refrigerators tossed around. But then I saw something, like a little white box, and I went over and I climbed in through all the debris - and here was this little pack of White Claw and it was like it was meant for me. I held them up and my neighbour took the picture that has gotten so much attention,” she says with a laugh. That photo of her holding her White Claw triumphantly over the wreckage went viral on social media and even got her a response from the beverage maker.
How are Krystle and Jocelyn doing weeks after the worst storm to ever hit their hometown? Both say they feel a whole lot of gratitude.
“I’ve cried just as much over the heartwarming amount of support that I’ve had from family, friends and strangers as I have over the loss of a home,” Krystle says. It could be a cash donation or just someone calling to say they’re thinking of her. “I never, ever expected to feel any of this in my lifetime. This is all things you see on the news. Things you watch in the movies. But the amount of support is definitely what’s keeping myself and my family going right now,” she adds.
As for Jocelyn, she wants to thank those who have reached out, but especially her “heroes” - her brother-in-law Brian Farrell and neighbours Dave Clarke, Dave Mauger, Grant Rodgers, Joan Rodgers and Noah King - whom she credits with saving her life. “It’s hard. I close my eyes and I can see the waves coming to get me, but I also know that there’s good people out there and that’s what I focus on,” Jocelyn says.
Krystle agrees. “Our province is tough. Newfoundland is like no other place and our people are special, and even though we went through what we did, I’m still forever grateful that I live here. I still wouldn’t want to be anywhere else in the world.”