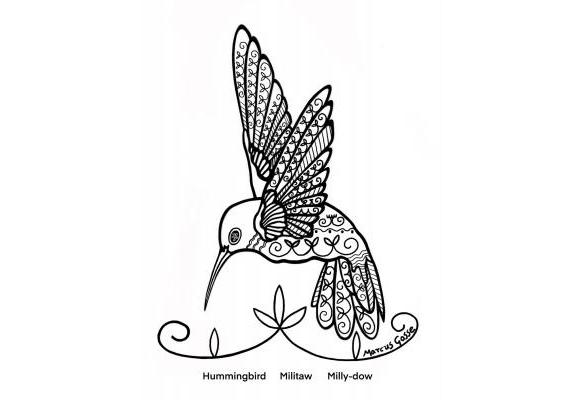 This drawing is the work of Newfoundland Mi’kmaq artist Marcus Gosse, a member of the Qalipu Mi’kmaq First Nation Band. His grandmother, Alice Maude Gosse (nee Benoit) is a Mi’kmaq Elder from Red Brook (Welbooktoojech) on the Port au Port Peninsula.

Marcus’ work has been exhibited in the Art Gallery of Nova Scotia in Halifax; The Rooms Provincial Art Gallery in St. John’s, NL; and the Canada 150 Art Show at the Macaya Gallery in Miami, FL; and his work is in private collections around the world.

He has generously offered a series of his colouring pages to run monthly in Downhome. Each image depicts a NL nature scene and teaches us a little about Mi’kmaq culture and language. Each colouring page includes the Mi’kmaq word for the subject, the phonetic pronunciation of the word, and the English translation. And you’ll notice a design that Marcus incorporates into most of his pieces: the eight-point Mi’kmaq Star. This symbol dates back hundreds of years and is very important in Mi’kmaq culture. Marcus’ Mi’kmaq Stars are often seen painted with four colours: red, black, white and yellow, which together represent unity and harmony between all peoples. Many Mi’kmaq artists use the star, and various Mi’kmaq double curve designs, to decorate their blankets, baskets, drums, clothing and paintings.

To learn more about Marcus and find more of his colouring pages, look him up on Facebook at Mi’kmaq Art by Marcus Gosse.