Pet of the Year

In the spring of 2022, Downhome launched our first Pet of the Year Contest, asking for stories of current pets who’ve changed the lives of their owners. We received a wide range of entries and read inspiring stories of cats, dogs, horses, even a cow and a dove! These beautiful animals offered emotional support, taught lessons and brought comfort, and all their stories were heartwarming (read some of our favourites on DownhomeLife.com). However, this is a contest and we had to choose a winner. For her patience, her exceptional friendship and the remarkable influence she’s had on a young boy’s life, we chose Polly. Here is the extraordinary story of Polly the Chicken and her best friend, Fox.


It may seem pretty strange for a fox to be welcome in a henhouse, but this is the story of an exceptional case.
Polly the chicken lives on a farm in Erickson, Manitoba. She is part of a flock of three-year-old Leghorn chickens with fluffy white feathers and red combs. Her best friend is six-year-old Fox, a boy who lives on the farm with his mom, dad, brother and sister. Fox and Polly do everything together, and even though they’re very different, the friendship they share is a joy to see.
Fox has always been fascinated by chickens. “When he was really young, when he was only a baby, we would bring him over to the family farm,” explains Fox’s mom, Jillian Winstone. “He would lose his mind over them! The chickens, and their movements, were really funny. Fox always laughed; he always thought it was so funny.”
Fox has a unique way of looking at the world. “We always kind of knew he was a little bit of a different kid, since he was probably six months old. The way his mind worked was pretty amazing,” Jillian says. Fox eventually was diagnosed with autism in 2020, when he was in kindergarten. He had a hard time in social situations, he would sometimes get overstimulated and he struggled to regulate his emotions.
Fox was about three or four years old when Polly and the rest of the chickens arrived on the farm, bringing Fox a sense of calm in a world that often felt overwhelming. “We got him his own flock and it helped him immensely. It was worth the stress of taking care of chickens and all that because of how happy they made him,” Jillian says. 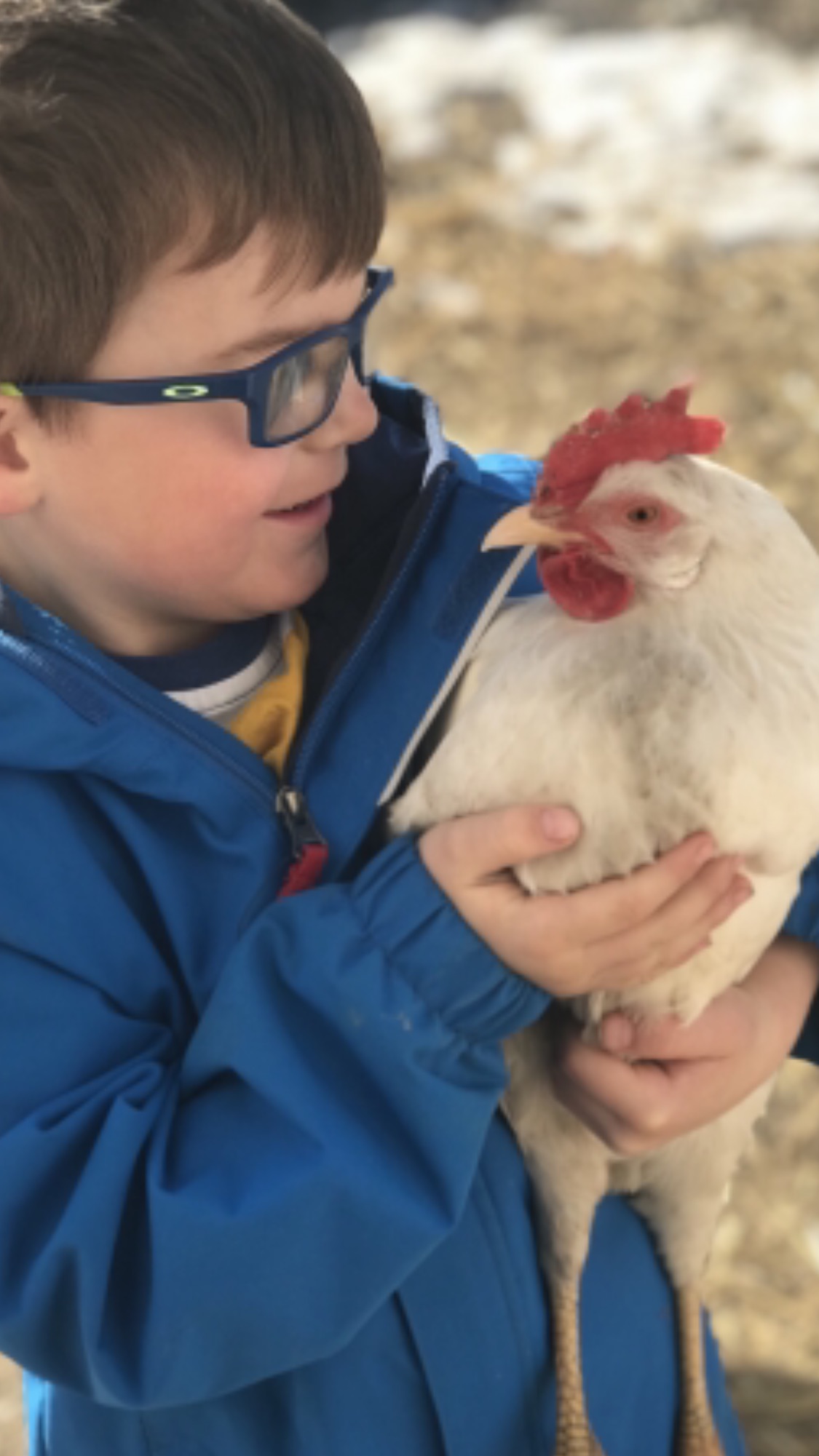 “He comes up with these names,” she continues. “All the Leghorns, that’s the breed of chicken Polly is, they’re all ‘Pollys.’ We have other breeds of chickens, but the Pollys are the white ones.” Fox’s particular Polly is distinguishable by her unique red comb, and, Jillian says, she’s more sociable than the others.
Fox loves spending time with Polly and his other feathered friends. “He’ll sit outside all day with them, just sit with them and talk to them,” Jillian says. “When he’s with the chickens, it’s like everything’s just chill. It’s such a positive thing with my son.”
Jillian says Polly and the chickens brought Fox a sense of acceptance that he sometimes found difficult with other kids his age. “They’re really therapeutic. I think it’s the fact that they would just sit and listen to him, and listen to whatever he wanted to talk about.”
The relationship that blossomed has had a noticeable, beneficial effect on Fox. “Since Polly came into his life, he has learned so much about himself,” Jillian says. “He’s a very outspoken kid now. You would never know a couple of years ago, but now he’s outspoken and so smart, such a smart little boy.”
Fox has also learned a lot about caring for chickens and loves to share his knowledge. “He incubates his own eggs and hatches his own chicks. He knows the life cycle of a chicken. He’s almost seven, but you’d think he’s 15.”
Fox would bring Polly everywhere if he could, or if Mom and Dad allowed it. He loves to tuck Polly under his arm and always makes sure she feels included. They make a super cute and comical pair. In his kindergarten graduation photo, Fox is beaming and holding Polly, who wears a matching graduation cap crocheted by Jillian. In another, Fox and Polly sport matching Christmas sweaters. “I made a chicken Christmas sweater!” Jillian recounts, laughing. “He’s holding the chicken for his Christmas picture!”
Fox brings Polly to school for show and tell, tucks her into his warm jacket for ice fishing in the winter, and even sets sail with her out on the pond. “Chickens don’t swim!” Jillian laughs. “Polly just sat on the edge of the boat.”
Polly is docile, patient and trusting, and Jillian says chickens are underrated animals. “They are a lot smarter than people give them credit for, that’s kind of what I’ve noticed over the last few years with them. I think she tolerates Fox, and I think they learned a lot from each other. I mean, the chickens are so good with people. They’re free range here on our farm; sometimes they’re up on the deck or on the step. Anytime anybody walks out of the house, they come running.”
The sweet relationship between Fox and Polly is difficult to describe. “I don’t know how to explain it; you’d have to see it for your own eyes almost,” says Jillian. “You know, I get it. You see dogs, cats being therapeutic. But for Fox, it’s the chickens. He loves them.”
She continues, “Polly is perfect for Pet of the Year. These birds don’t get enough credit for how amazing they are; so much patience and kindness they can show is pretty incredible to watch. I’m so thankful that Polly came into Fox’s life!”

What a great write up! But I am a little bit biased. Fox is our grandson.. and Polly has made a huge difference to this little boy! Thank you for writing this article and sharing this remarkable friendship!