The Friendly Giant's Harp in Newfoundland

You know how in life one thing often leads to another? Well, a fat tire bike ride with friends earlier this year led to my introduction to a very interesting classical musician and her connection to, arguably, the most famous harps in all of Canadian television history.

Breaking out from the former Branch Railway line running through Conception Bay North onto a cabin-lined, snow-covered road in Marysvale on a moonlit night, I joked, “This looks like a scene out of a Hallmark movie, maybe call it ‘Moonlight over Marysvale,’ and all we have to do is get maybe a romantic harp for the opening number.”

That prompted a member of the group to say, “You remember ‘The Friendly Giant’ children’s TV show? Well, apparently they played that piece live every show. It was never pre-recorded, and two of the actual harps used by John Duncan, who used to play the intro theme song for the show, are in Newfoundland and are still in use today. I know one of the harpists. if you would be interested in talking with them.”

Of course I would. And that’s how I wound up chatting recently with the very talented Sarah Veber, 26, of St. John’s, NL. She’s the principal harpist for the Newfoundland Symphony Orchestra (NSO). 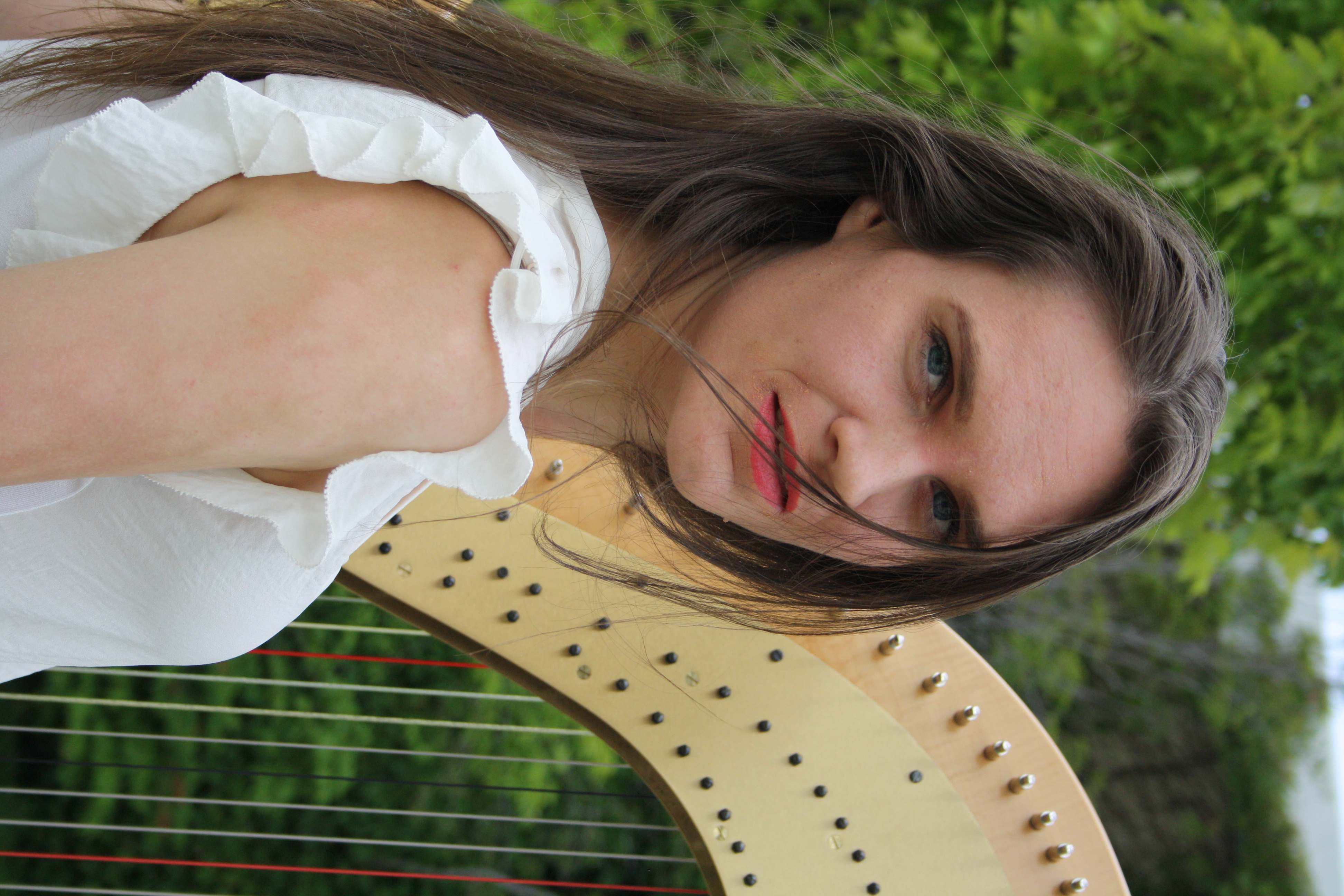 Additionally, Sarah has performed with the National Youth Orchestra of Canada, Orchestre Symphonique de Longueuil, and Ottawa Chamber Orchestra. She was a finalist in the Canadian Music Competition and the National Arts Centre Bursary Competition, and has a Master of Music degree from University of Cincinnati, a Bachelor of Music degree from University of Ottawa and an ARCT performance diploma from The Royal Conservatory of Music. Currently she’s a medical student at Memorial University of Newfoundland and Labrador.

“I started music playing the piano at age two and switched to the harp at age seven. I didn’t really know what I was getting into at the time, but it has been a very interesting journey ever since,” Sarah says. “I would agree harp is considered difficult to play, but I did have a musical background and a lot of the theory for piano is the same, so that was an advantage. There is a technical adjustment, of course, and it can be a bit confusing for beginners keeping track of all the strings, but I really love it. Most people in this province who play use the smaller style Celtic harp. I use a much larger classical harp which, at around six feet tall, is bigger than I am, and it is what you would more often see at an orchestra concert, for instance.”

One of the harps she performs with once belonged to John Duncan, and he used it to perform the opening song to “The Friendly Giant.” But that’s not her only connection to him and the show.

“I was very fortunate to have as my early harp instructor Carla Emerson Furlong of St. John’s, who is a legend in the harp community. She was educated at the famous Juilliard School. She is a wonderful concert musician and former harpist of the Royal Philharmonic Orchestra who has been teaching music over 70 years,”says Sarah. “At one point, Carla lived and performed in Toronto for a while. She knew John Duncan, who did the music for many CBC shows including ‘The Friendly Giant.’ Carla, as I understand it, actually sometimes played the theme song for the show, I believe, before Duncan started. Carla was kind enough to teach me the piece, ‘Early One Morning,’ and she wrote it out for me, so I treasure my handwritten copy of the music by her.”

Sarah says she’s not sure how Duncan’s harps wound up in Newfoundland and Labrador, but there are, in fact, two of them here. “I use the Concert Grand harp, which was Duncan’s performance harp. That one is a beautiful Wurlitzer. The other harp was his studio harp, and that is still here in the province, is my understanding, as well.”

(As far as I know, Carla Emerson Furlong is in her late 90s and still living in the province, though I was unable to connect with her for this story. Hopefully, that will be another story for another time.)

“The Friendly Giant” was a beloved TV show for a generation of Canadian kids. It starred Robert (Bob) Homme as the titular character. It actually started as a radio show in 1953 and then a TV show, both aired in Madison, Wisconsin. Enduring success came when the show moved north and joined the CBC children’s show lineup. It aired from 1958 to 1985, always beginning with the gentle notes of “Early One Morning,” played live by harpist John Duncan. Homme was awarded the Order of Canada in 1988 for his lifetime achievements. “The Friendly Giant” has never been revived as a TV show. Simply put, it left boots too big to fill.

Any kids of “The Friendly Giant” era today will immediately smile upon hearing the first notes of “Early One Morning” and reflexively look up. Waaaay up.

Asked if she minds getting asked to play the children’s show song, Sarah replies, “No, I don’t mind at all. Once folks hear about the harp connection to Duncan, everyone loves it and they all want to tell me a favourite story about ‘The Friendly Giant.’  There is something nice and familiar about the music and it makes people happy. That’s a good thing.”