Why Do Bagels Have Holes? 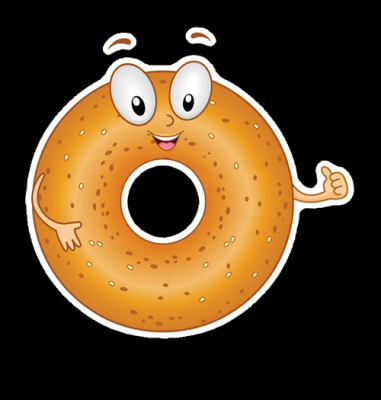 There’s no better way to start your morning than with a piping hot cup of coffee or tea and a freshly baked bagel. They’re chewy and delicious, and accompanied by a pat of butter or margarine, the “yum” factor rises even higher. If it weren’t for that pesky hole in the middle, you’d have more bagel to enjoy. So why is it there in the first place?

We brought our query to the folks at the Smithsonian’s National Museum of American History, where Dr. Ashley Rose Young (historian of the American Food History Project) and Paula J. Johnson (curator of Food History) shared a wealth of resources to help Downhome follow the breadcrumbs.

Bagels have quite a storied history, and as it turns out, the hole in the middle serves both a practical and symbolic function. In The Book of Jewish Food: An Odyssey from Samarkand to New York, Claudia Roden writes that bagels were “the everyday bread of the Jews in Eastern Europe.” Like hallah, which is a braided bread eaten on the Sabbath and major Jewish holidays, “it is of South German origin, but it came into its own and took its definitive form in the Polish shtetl.” (Shtetls were small market towns in Eastern Europe in the 19th and early 20th centuries that had large Yiddish-speaking Jewish populations.) She adds, “Because of their shape - with no beginning and no end - bagels symbolize the eternal cycle of life.”

In her book King Solomon’s Table: A Culinary Exploration of Jewish Cooking from Around the World, Joan Nathan says even the ancient Egyptians enjoyed a“bagel-like treat.” She adds it’s no surprise that the “basic roll-with-a-hole”concept is centuries old, “as there’s a practical advantage to this design - it’s possible to thread such a roll on a stick or a string, facilitating transport… The evidence suggests that those of ancient Egypt and of the greater Mediterranean came in two types: the soft, sesame-studded variety, called bagela in Israel and other parts of the Middle East today... and a pretzel-like crispy Syrian ka’ak flavoured much like the taralli, a hard, round cracker that has been a snack for centuries in southern Italy,” she writes, adding that neither is boiled.

In The Oxford Companion to American Food and Drink, editor Andrew F. Smith notes the word bagel “possibly derives from beigen, German for ‘to bend,’ or the Middle High German bougel or buegel, meaning a twisted or curved ring or bracelet.” He continues, “Eventually, precursors of the bagel made their way to Russia and Poland. The first Jewish community in Poland, established by invitation and charter in the 13th century, probably brought biscochos, a ring-shaped cookie or cracker, with them dating from the Roman period.”

Some say bagels, as we know them today, came from Poland, Smith says. And while he also acknowledges the symbolism baked in, he serves up another interesting theory to help explain the hole in the middle. Chew on this:

“Mentioned as early as 1610 in the community regulations of Krakow, Poland, bagels, symbolic of the endless circle of life, were given as a gift to women in childbirth. There is another theory tracing them to 1683 Vienna, where bakers created stirrup-shaped buns in honor of their deliverance from the Turks by the Polish King John Sobieski; buegel is the Austrian word for stirrup. Yet another theory is that bagels were invented as an economical food for poor people because the hole saved on ingredients.”

Echoing Nathan’s earlier sentiment, Smith adds, “Many bagel bakers came to the United States with the mass of eastern European Jewish immigrants at the turn of the 20th century. The hole in the centre of the bagel enabled bakers to sell their wares on the streets of the Lower East Side of New York by threading dozens of bagels on long sticks that they could carry to customers.”

These days, you can find bagels all over the place, from supermarkets to donut shops. “Of all Jewish foods, the bagel has become the most mainstream, enjoyed by people not only in the United States but also worldwide,” Smith says.

The back of the cereal box may provide some interesting reading material, but when it comes to an interesting origin story, perhaps no other breakfast food rivals the humble bagel.