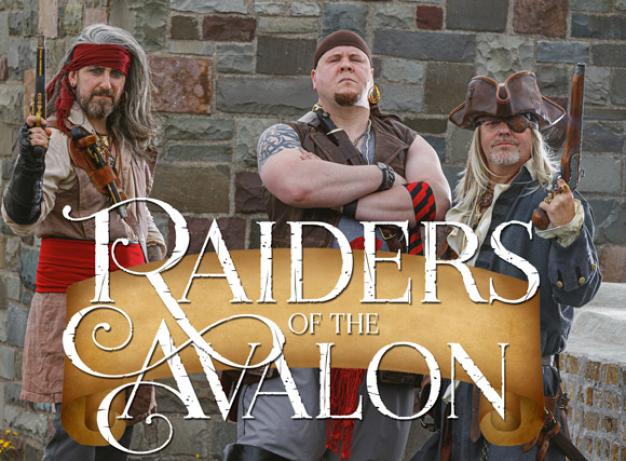 With roguish Captain Flint Locke at the helm, a local band of pirates have been spreading swashbuckling fun in uncertain times.
By Nicola Ryan

The story of Captain Flint Locke, like any good pirate tale, begins with buried treasure.

Capt. Locke is brought to life by Rod Hand, an artist who lives with his wife near Cappahayden on the Southern Shore of Newfoundland’s Avalon Peninsula. He’s a member of the Digging the Rock Metal Detecting club - a local group of history buffs who explore with metal detectors and enjoy learning about the time and context of the relics they find. In the woods and fields in various areas on the Avalon, group members have unearthed everything from Spanish coins to cannonballs.

Searching with a metal detector is a hobby that brings you face-to-face with history. You start doing your research on it,” says Rod. “The British were attacking the French here all along the Southern Shore. Peter Easton, he was in Harbour Grace out there, and down in Ferryland and throughout Renews and all those little places.

“I started doing the history on Peter Easton,” he continues, “And I said, jeez, he’s not a well-known pirate compared to [Black Sam] Bellamy, or Anne Bonny or Blackbeard, but he should be. He was very successful, especially here in Newfoundland. He did very well for himself.”

A quick history lesson: In 1611 or 1612, Peter Easton, formerly a loyal British privateer, went rogue and established a fortified headquarters at Harbour Grace. He prowled along the coast from Trinity Bay to Ferryland, plundering vessels and raiding harbours. He had fleet of 10 imposing pirate ships and ransacked an absolute fortune from treasure ships of the Spanish Plate Fleet. Easton retired after that, around 1614 or ’15, bought a Marquis title, married a rich heiress and settled down in luxury on the French Riviera.

Rod thought it would be a great idea to make video to use what he had learned about Easton and the history of piracy in Newfoundland to promote the Digging the Rock group. For an authentic pirate look for the video, Rod asked his friend Gary Murrin, a St. John’s-based leather crafter, to make him an authentic looking tricorn hat. “He said, ‘I’ve never made one before but I’ll give it a shot,’ and it came out deadly,” Rod raves.

Gary runs Valgar Leather and Forge through Facebook. He creates custom-made leatherwork items including hats, belts, bags and wallets. His new pirate-inspired pieces got noticed, and when Gary asked fellow members of the Sci-Fi on the Rock Facebook group if they were interested in forming a pirate group, the response was more than enthusiastic. “It kind of just snowballed,” Rod laughs. The new Raiders of Avalon Pirate Collective soon boasted over 160 members.

“The timing was excellent,” says Rod. COVID-19 had curtailed activities for a long while, and the Sci-Fi on the Rock fans were missing the fun and conviviality of regular events. “I guess with the pandemic, everybody’s been locked down, there’s no conventions, everybody’s kind of craving something and it flooded with a bang,” says Rod. “There’s a lot of creative people and everybody just started putting [ideas] together.”

Being a member of the Raiders of Avalon is sort of like being on a movie set with no script, where the only goal is to have fun and make some great memories. Participants design their own costumes and create their own characters and backstories.

“The name I chose plays off the word flintlock, that’s the name of the gun that we use,” Rod explains, “Captain Flint Locke.” Rod based his amiable character on Johnny Depp’s performance as Captain Jack Sparrow in the Pirates of the Caribbean movies. “I kind of use the voice, Johnny Depp’s voice, ’cause the kids really warm up to that. Some little kids get scared around the pirates, and I’ll go up to them and say, ‘Listen, don’t mind my mates, I don’t like them either,’” he says, dropping into Sparrow’s conspiratorial English drawl.

The Raiders have had a busy calendar of events since last summer, making appearances in St. John’s, Bonavista, Port de Grave, Trepassey and Carbonear. In fact, during the Pirate Family Day at the Stone Jug in Carbonear they captured the chief of the fire department, the mayor and the head of the local RCMP, collecting donations to the food bank as ransom. They hope to turn it into an annual event.

Plans are in the works to meet similar creative and costumed folks at a Renaissance Fair in Mount Pearl next summer, and they may pause to plunder the town of New Perlican on the way. “It’s fun for us, and we look forward to getting out there,” laughs Rod.

There’s a special kind of magic in capturing the imagination of a child. “To see the smiles on little kids’ faces, that’s the big thing,” he says. Rod as Captain Locke has a flair for interacting with the young hangashores he meets. “I went to the dollar store actually and picked up all these little bags of gold coins,” he explains. “If I meet a little kid, or if I see a little kid and he’s kind of wary, I’ll say, ‘Listen, I got some treasure here, put that in your pocket.’ I give him a little gold coin and I say, ‘Don’t tell your mom and dad. Don’t tell the rest of my pirates either, ’cause I’m not supposed to give this stuff away.’ Almost like a conspiracy going on with one of the pirates, which makes them feel special.” Other kids like to show off their pirate outfits and pepper the Raiders with questions like “Where’d you get your rings?” “Where’d you get all your stuff?” “Is that real sword?”

It’s not just young mateys who are drawn to the pirates. People of all ages are ready to be outside and have a little fun after a tough year of COVID-19 restrictions. “They want to laugh again, they want to smile again,” Rod says. “There were two elderly ladies, I got to mention this. They were sitting down on the pedestrian mall [Water Street, St. John’s], just kind of sitting to themselves and they were looking over, giggling. I went up to them and said, ‘Listen love, what are you doing down here?’ She said, ‘Pirates, have you found your treasure?’ and I said, ‘Oh, I’m standing in front of two treasures right now.’ And they were, like, off their rocket! So it’s not just kids, right? It’s everybody.”

And sometimes, it’s the pirates themselves who get the best kick out of it all.