Q&A With The Dandelion Few 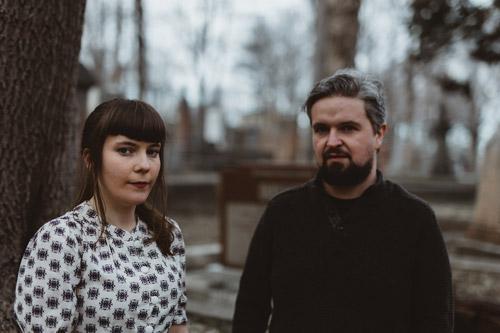 The Dandelion Few are two people whose many musical talents complement each other in a wonderfully organic way. You can feel the magic in their rich harmonies, which speaks to the band’s magical origin story (explained later in our Q&A).

Since moving to the province, Ireland’s Séan Bradley and NL’s own Tiffanie George have made both a home and a name for themselves here in St. John’s, performing at the famous Newfoundland and Labrador Folk Festival and racking up nominations for multiple MusicNL Awards. As The Dandelion Few, they launched their sophomore record, Sure We’ll Go Home by Water, on September 19, 2021, just under four years after the release of their 2017 album, Diggin’ Towards the Sea. On this new record, both artists contribute vocals, with Séan playing all guitars, bodhrán and broom, snare, cuatro and tambourine, and Tiffanie playing piano, ukulele, melodian and glockenspiel.

Sure We’ll Go Home by Water features some interesting collaborations, with many folks involved wearing multiple hats - engineer and producer Pete Verdin also showcased his talents on double bass, while Michelle LaCour played accordion and worked with Pete to mix the album. Leah Vokey-Sing and Maile Graham-Laidlaw both play fiddle on the record, which features artwork by locally renowned artist Boyd Chubbs.

The album opens with “Burn Down the Houses,” with soft fiddle introducing this acoustic indie-folk song. Séan’s beautiful Irish accent shines through his soft vocals in the first verse, with Tiffanie joining in on the chorus, creating the aforementioned rich harmonies that The Dandelion Few are known for.

“Fruit Bat” starts off slowly, but the chorus soon swells up and swallows the listener in a wave of acoustic guitar and tambourine keeping time, ebbing and flowing as the fiddle weaves its way ashore to your ears.

“The Ghost of Tara Browne,” does not explore a haunting of the traditional kind - it’s the shadows of people we know aren’t there, the ghosts of our past, and the haunting thoughts that fill our minds in the dark. “I’ll take just one look at you, but the ghosts in your head or the books that you claimed you’ve read, will never distinguish these thoughts and these dreams I’ve had of you.”

Tiffanie’s piano is the driving force of “Fill My Cup,” with the vocalists trading off on each verse, later harmonizing on the track’s final verse and catchy chorus. Meanwhile the album’s fifth track, “Currents,” relies on simplistic guitar picking and delicate fiddle as Séan and Tiffanie sing of the various currents than flows through us and around us.

“A St. John’s Tale” feels more like a traditional folk song, written about the hardships of life in Newfoundland and Labrador and the many losses we take in stride, while still counting our blessings. “Thank God for a good rock to stand on,” they sing. The track fades out with a spoken-word piece performed by Séan, before Tiffanie joins in on vocals for the outro.

“The Teapot” is a personal favourite, with a kind of spooky, kooky, carnivalesque vibe, aided by bodhrán and ukelele. I draw comparisons to some of Tom Waits’ later works - an artist I personally know Tiffanie appreciates. “Pour me, pour me, into the sea, to be with the seaweed, and the algae. Pour me, pour me, so I can rise as steam, to bathe away these troubles, to rinse these blood cells clean,” Tiffanie sings.

“Talež” kicks off with dreamy glockenspiel, soon joined by acoustic guitar - heavy strums contrasted with delicate fingerpicking has this song straddling the line between indie-folk and folk-pop. The song’s final two minutes features a particularly impressive vocal performance from The Dandelion Few, as they rise from a whisper to a crescendo before the track quietly fades out.

The second last track, “A Fox and a Robin,” is a slow and solemn song about a man who has left his home to seek out new experiences and the unknown, and to find the good within it. Perhaps this is a nod to Séan’s move to Newfoundland, or to Tiffanie’s adventures abroad in the Emerald Isle.

The album closes on a traditional tune titled “Brian O’Linn,” a comical Irish song where The Dandelion Few found their album title. When his family falls into a river, Brian O’Linn is unfazed, telling them, “Sure we’ll go home by water,” the final line of the song.

Truth be told, I had anticipated a more traditional sounding record as a whole, but this is definitely an indie-folk record that deserves airtime on both local NL-Irish shows and contemporary Canadian radio. The Dandelion Few are two, yet many, with two albums out and a few more to come, we hope.

Q&A with the Artists

Wendy Rose: Let’s start at the beginning - when, where, and how did this duo come into existence?

Seán Bradley: It all started in 2017 in the border town of Dundalk on the east coast of Ireland just an hour north of Dublin… I had been living there for years and been involved in just about any form of music I could be. One of those gigs was a regular folk session I helped run in The Bartender Pub every Tuesday, when one night Tiffanie walked in the door pretty much fresh off the boat. A voice like hers isn’t something you hear every day and we clicked; our voices seemed to blend together in a very natural way… Shortly after this, Tiffanie introduced me to the RPM challenge and from this we wrote, recorded and gathered together the bones of what would become our first record, Diggin Toward the Sea, where we sought to capture that same beautifully flawed sound that attracted us to so many artists and recordings we love.

Tiffanie George: The name The Dandelion Few was Seán’s idea… I liked the idea of persisting like that meddling weed in our namesake, how quickly they disperse and disseminate, much like the transmission of folk music and the tales we weave into it. Like dandelion clocks, our voices travel by the same route - air. The “few” in Dandelion Few is representative of our frequent collaborations with musicians and artists through multiple distinctions.

WR: Seán, you’re certainly not the first Irish musician to put down roots in Newfoundland - what are some of the similarities and some of the differences between being a folk musician in NL and in Ireland?

SB: Culturally, Newfoundland and Labrador is so very distinct and vibrant, especially when compared to the rest of Canada, and I love that pride of place that the people have here; it isn’t fake, it’s very real and I really relate to it. But no one can deny the evidence of my own crowd in every nook and cranny here. I hear it in people’s turn of phrase, I see it in the family names of folks who’ve lived in certain coves for generations, and I can plainly see the appeal my people had years ago in the rugged landscape. So much of it speaks of home to me.

Newfoundlanders, whether they play an instrument or not, are very musical. Just like home, there’s a rhythm to the accents, a pace of life that takes its time, and deep, deep respect for anyone carrying a fiddle or who can sing something out of the blue. So in saying this, the music community was so inviting of us when we moved here and put down roots. It was pretty much over a pint and a song that we were accepted into the local folk scene and [it] didn’t take long to establish ourselves, collaborate and forge some really deep and close friendships.

WR: On the other hand, Tiffanie, I’d love to hear about your impressions of the Irish folk scene in comparison to the St. John’s scene. What could we learn from the Emerald Isle?

TG: I loved being involved in the Irish folk scene… I found that people were so welcoming and genuinely interested in the songs you brought forth. I made sure to bring a few NL and even Canadian folk songs to the table… Irish audiences are exceptional in that they will listen closely to the words and the unfolding of a song… They’re also not afraid to tell someone to hush up on the odd occasion when someone is making a racket. You may hear a few “whishts” or “ciúnas” (it means “quiet” in Irish - pronounced cue-ness) amongst the crowd in that case.

WR: What are you hoping 2022 will look like for The Dandelion Few?

TDF: We want to tour, right now, and can’t wait to get out on the road again - specifically further afield in Canada. Get the smell of the house off of us!… With all the recent and frequent lockdowns and restrictions, it’s become increasingly… difficult to generate any kind of a steady income as a musician these last few years - not just for us, but for every musician we know… In the meantime, until we set out again we’ll be locked away working on a new record. Sure, why not?