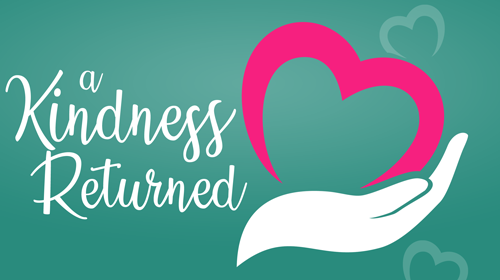 In this excerpt from author Phil Riggs' book "Our Random Acts of Kindness", he tells the story of how fate brought strangers together and showed them how deeply they were already connected.
By Phil Riggs

Life had been good for Kay and Gordon Little. They had spent most of their years working in Wabush, raising their two children there. Later, retirement on the island seemed wonderful, too, until a horrific motorcycle accident in Edmonton, AB, nearly took the life of their son, Chad, in 1999. His initial prognosis was very bleak and he was a while fully recovering from his injuries.

As if one setback was not enough, their daughter Donna fought a life-threatening illness for eight years. Her liver became infected and started to shut down, and she was put a wait list for a new liver. Many times, her parents thought she’d never survive long enough to get the surgery; at one point, Donna was a mere skeleton of herself, weighing just 57 pounds. Everyone was there to offer prayers with the family that her wait would not be in vain.

Finally, her day arrived. On October 12, 2009, a liver match was found and the transplant operation was a success. While prayers for Donna were answered, Gordon didn’t live to see it. He passed away from cancer almost a year before, on November 30, 2008.

Kay remained in Glovertown, in a home that felt so empty and lonely without her husband. Her son and his family were in Alberta, and Donna lived in Ontario. Time, though, seems to have a way of healing most sorrows and she was managing as best she could on her own.

There was a lady in town, Ada, who was well known for her homemade bread and operated a small enterprise. Kay was one of her regular customers, and Ada would call Kay whenever she had fresh bread ready. And so it was on this day in late July 2010 that Kay was informed of the loaf awaiting her at Ada’s.

It just so happened that a young lad on his bicycle came upon Ada’s roadside sign that day and went up to her house looking for a loaf to buy. Adam Harte was cycling across Canada trying to raise money for The Hospital for Sick Children (SickKids) in Toronto and had dropped down to Glovertown looking for a restaurant for an evening meal. At the time, unfortunately for him, there was no restaurant in town. When Ada heard of his plight, she invited him in to have supper with her family.

While Adam was at Ada’s, Kay arrived to buy her loaf of bread. She was introduced to Adam, and she learned he was looking for a suitable place to set up his tent for the night. It was pouring down rain outside, so Kay offered him the spare room at her house. Adam gladly accepted. Some people have asked her why she never feared having a stranger spend the night in her house. She explained she had no fear of him, but felt a certain premonition - as if he were meant to spend the night with her at her home.

After his bike was stowed in the shed for the night, Kay offered Adam a beer, as she still had some of Gordon’s left in the fridge. She then poured herself a rum and Coke and they started off an innocent conversation. He strolled around the living room looking at all her family pictures and commented on how nice they were. Then she casually mentioned that her daughter, Donna, had received a liver transplant in Toronto some time ago. He asked if her name was Donna Chute.

Kay said yes, and was surprised when she saw tears welling up in his eyes. He gave her a big hug and quietly told her that he was the one who transported the organ to the hospital so Donna could receive her new liver. It turned out to be a long night of conversation for both of them.

Adam explained that his job was transporting organs to the hospitals where they are needed, delivering them right to the doctors in the operating rooms. He remembered well the occasion he delivered the liver for Donna’s transplant. It was Thanksgiving weekend and he was just about to sit down with his family for a wonderful meal when he received the call. The aroma of the crisp browned turkey and all its trimmings were so enticing that he received the phone call with reluctance. But his mother encouraged him to go; he was taking an organ to save someone’s life. Turned out, he was helping save Kay Little’s daughter’s life.

Kay’s step was a little lighter the next morning when she and Adam made breakfast together. She readied the toast, and he cooked the bacon and eggs. Afterwards, Kay made up a bunch of lunches for him to take on his journey to his final destination - dipping his bike in St. John’s harbour. However, there was certainly a reluctance for both to part.

Fortunately, the story doesn’t end there. Adam told Kay that he and fiancé would be making a room, called Kay’s Room, in their Toronto home for her to come and stay with them sometime. Furthermore, he had a cottage on Lake Ontario that she’d be welcomed to visit. Later Kay received a photo from Adam of him with his bike at St. John’s harbour. They kept in touch the following months, and Adam kept asking her to come visit. His parents and his fiancé wanted to meet her.

It was nearly 10 years later when Kay saw Adam again. During a visit with her daughter in Toronto in July 2018, Adam invited her out with him and his fiancé for a meal. He showed up with a beautiful bouquet of flowers for her. When they delivered Kay back to her daughter’s condo, she invited them inside and Adam finally met Donna. It was an emotional experience for everyone.

Oftentimes it’s a sacrifice for Adam to leave his comfortable home at a moment’s notice, when he may be enjoying a meal or spending quality time with family or friends. Then it can involve tiring drives or flights to obtain and deliver the donor organ. But it’s a sacrifice he is more than willing to make each time he has to set out on that journey.

Imagine his thoughts as he carries this lifesaving gift, how fortunate for the recipient who will have a second chance at life when he arrives at the operating room. But while there is joy in the hospital of the recipient, he also thinks of the complete sadness at the side of the recently deceased donor. He has an attitude of gratitude for that person who took the time to fill out a donor’s card when their driver’s licence was renewed. And often he thinks how those recipients fared in life. One can only imagine the thoughts tumbling through his mind when he knew he would finally meet Donna.

Kay has since returned home from such a monumental joyous experience, grateful that she took the time to show a little kindness to a complete stranger. Adam keeps asking her to come for another visit, which she says will happen in the near future, when Donna’s daughter gets married.

Sadly, Donna passed away on October 15, 2020. But the liver transplant that Adam helped facilitate gave her 11 more years with her family.