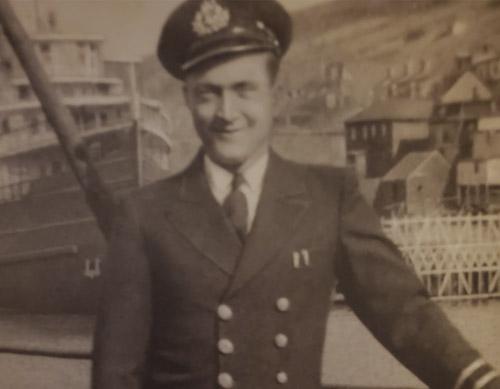 Robert Hunt shares his father’s firsthand account of being aboard the SS Kitty’s Brook when it was attacked during WWII.

My father, Edward Hunt, an able seaman, was one many thousands of merchant marines who left St. John’s between 1939 and 1945 to battle the Germans on the Atlantic Ocean in the Second World War. On May 9, 1942, his ship was torpedoed approximately 35 miles off the coast of Nova Scotia. His supply ship, the SS Kitty’s Brook (owned by Bowater’s shipping of Corner Brook), was returning to St. John’s from New York City. Nine of his best friends, out of a crew of 33 men, lost their lives. The survivors spent three-and-a-half days on the water, rowing about 35 miles towards land before they were rescued.

Here is an excerpt from my upcoming book, Torpedoed (Flanker Press), about their struggles to survive those hard days in May. My dad told me his thoughts about war and what happened to him and his friends while on the ocean.

My Father’s Own Words

My mind is going crazy today as we ready to sail on the open water after leaving New York. I know I am not alone with my thoughts and that every man on board any ship in these waters has some degree of fear going on inside him. We all try to remove this mindset away from this thinking, but being prone to an enemy attack always has one on edge. I start to think of more positive things and my mind drifts to my girlfriend, Mary Carmel Hayes, living in St. John’s. A smile always crosses my face when I think of both of us being together. It makes me feel that I am not doing this alone anymore.

It is amazing when one can almost touch, and feel, the dangers that surround us all when we are out here on the sea. It is a fear that lurks and hides inside all of us. It starts to seep into our minds, and into our thinking of what will come next to any one of us.

We are heading back to the Argentia Naval Base unescorted, and that is maybe why I am feeling this way. Again, I try to brush my foolish, unpleasant thoughts aside. I dig into my work on board ship as I try to put the doom and gloom behind me before my imagination starts to play tricks on my mind. I try to think of more positive things as we sail along on the open water.

After talking to Captain Morbey, I glance at my watch and see that it is 2:45. I decide to head down to the galley to chat with our wonderful cook about what he is having for lunch. I hop quickly down the galley stairs, stopping on the second landing to listen to the quietness. It is so serene, as if I am all alone in this world and everything has stopped moving. It is a peacefulness that I will always remember.

In that split-second of thought, if I had to know what was about to soon happen to us all in another 25 minutes or so, I probably would have stayed on deck! Then again, going down to the galley to see the cook probably saved my life, for the same spot where I had been standing, moments before I descended below was the spot where the first torpedo hit. It killed one of my good friends, George Carter.

Coming back up from the galley, as I step on the same second landing I hear a large bang, a swooshing sound and a loud thump. It sounds like a huge hammer hitting steel as the vessel shakes. I feel the whole ship vibrate as if we’re in an earthquake. As I look down, I see this deluge of water coming up towards me. For a second or so I think I may be dreaming. I’m bewildered and not thinking straight.

In the next instant, as the cook tries to maneouvre his way up the stairway, a huge suction noise pulls him backwards. The force of the water seems to be reaching out for me. I turn towards the open hatch and, on complete instinct, motion myself upward. Reaching the landing, I push myself towards the opening and out through the porthole. It is then that I see this quick flash and my whole body is thrown thought the doorway and upward into the sky. My senses leave me and I lose complete control of my body. It seems as if time has somehow suddenly stopped and my mind cannot comprehend what is happening. I feel my legs burning, and it seems as if I am being detached from the rest of my body.

There is a sense that I am free-floating as I twist and turn in the air in slow motion. I feel I am in a dream, and my body is so warm. Then I am hit by a cold surge as I plunge feet first into the water. It encircles me like a cocoon as I hit the surface hard. My brain tells me there is something terribly wrong and my instincts tell me that I must try to fight it in order to survive. As I sink lower and lower, I have no control over my plunge.

It is then that I turn my head and see her, my Mary Carmel, staring straight at me. She is reaching out to touch me. I stretch out my hand and touch her face. How beautiful she is! At that moment I feel hope and life, as I hear her talking to me. “Hold on a bit more, Ned, you will be alright. I’m here at your side.”

I feel someone touching my back as I float to the surface. I hear the voice of my friend, Harold Richards, and he is telling me, “We were torpedoed, Edward.”

Torpedoed! What does he mean? Torpedoed! One moment I was on board ship, and then I am in the water trying to understand what has happened. I have a distinct ringing in my ears and my head.

We all turn to a thunderous roar. From a short distance away, the SS Kittty’s Brook screams out to us. All hands turn to see the her rise up into the air. She stands motionless as it towers high above us all. It moans, creaks and groans as if saying goodbye to each one of us in its own way. It readies itself for its triumphant rise out of the water as it starts to fall into its final death roll. It stares down at us as if it will never move, but then slowly, its massive hulk sinks into the watery grave below.

Robert Hunt is the author of eight books, including the trilogy of Corner Boys, Townies and Brazil Street, followed by The True Meaning of Christmas and The Bullet: Stories From the Newfoundland Railway. His ninth book, Torpedoed, is set to come out in 2022.

When is this book actually going to be available. My Uncle Abe Coffin was one of the surviving crew members of the ship and among those who rowed into Lockport Nova Scotia. Does the book have an index?