Questions and Answers for Fall Gardeners 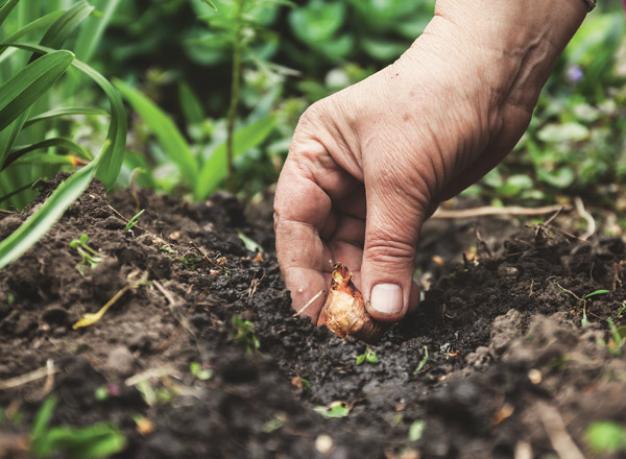 Downhome's gardening expert, Kim Thistle, answers common questions for fall gardeners.
Do you have a question for Kim? email  downtoearth@downhomelife.com

What happens if you plant your fall bulbs (tulip, daffodils, crocus, etc) upside down?

It is often difficult to know which side is up when it comes to fall bulbs.  Crocus are one of the more difficult as the top and bottom look the same.  Rest assured that no matter which way you plant them, they will grow and bloom.  The stem will emerge and very shortly after will change direction and reach for the light.  As the roots emerge the bulb will actually right itself and gradually turn over.  It just goes to prove that plants are resilient and will do what it takes to survive.  When in doubt, plant them sideways.

What happens if I don’t get a chance to plant my bulbs early in the fall?

As long as bulbs can receive 8 - 12 weeks of cold, they will be fine.  You can remove the snow off the ground and plant them in December if your fingers can withstand the cold.  When all else fails, plant them in pots and bury the pots under the snow.  Potted bulbs can be retrieved from under the snow in late winter to be brought inside for spring bloom.

Do root vegetables have to be harvested before winter hits?

Not only can they be left in the ground but they actually become sweeter with time.  I drive a stake that will show above the snow line into the ground at the end of the row so that I can locate my vegetables.  I rake the snow off and harvest kale, carrots, leek, beet, collards, parsley and many other herbs and vegetables that will survive the cold, all winter long.  It is the easiest way to store them and keep them fresh.

Is it okay to plant trees in the fall?

Resounding ‘yes’.  The ground has had all summer to warm up and is at its warmest now.  Trees and shrubs have gone into dormancy and are losing their leaves so that they can concentrate on putting out new roots and not have to worry about supporting leaf and flower growth.  Don’t forget to use a root enhancer such as ‘Root Rescue’, Mycorrhizae or a soil activator.  Be sure to stake them as they won’t have time to anchor themselves adequately from strong winter winds and snow clearing machinery.

Can perennials be divided in the fall?

Autumn is a great time for dividing perennials.  As with the tree planting, the ground is warm and the plants are going into dormancy.  This gives them a wonderful opportunity to produce new roots giving them a better start for the following year.  Be sure to water them well after replanting and continue to check for moisture up till the ground freezes.

Do perennials have to be cut back before winter?

The stems left behind on perennials will catch the snow and help provide insulation for the roots.  The seeds will provide food for birds and small animals.  Plants such as Black Eyed Susans and Echinacea are excellent for this.  Also, it is easier to know what to remove in the spring as you can tell what is new growth and what is dead.

Should clematis be cut back?

The first year after planting any clematis it should be pruned back hard to develop a good structure.  Depending on the type of clematis you have, it may or may not need to be cut back.  There are three groups.  Group one clematis bloom in spring and these may receive a light pruning after blooming. Cutting back any later than this may compromise blooms the following year.  Group two bloom in early to mid summer.  These bloom on old and new wood and may be moderately pruned.  They are much more forgiving than the clematis that bloom in spring.  Group three clematis bloom on new growth and can be hacked back to within twelve inches of the ground.  If you do not know the type you have, err on the side of caution and only prune lightly until lyou determine what group your vine falls into.

When planting garlic do you plant the whole bulb?

Garlic bulbs should be divided and the individual cloves planted.  Each clove will become a garlic bulb.  Be sure to plant it 4-6” deep as the new roots tend to push the bulb toward the surface.

Yes.  One last weeding of the garden is important before weeds die off.  Most weeds produce seed that will fall to the ground and propagate giving you many, many more weeds the following year.