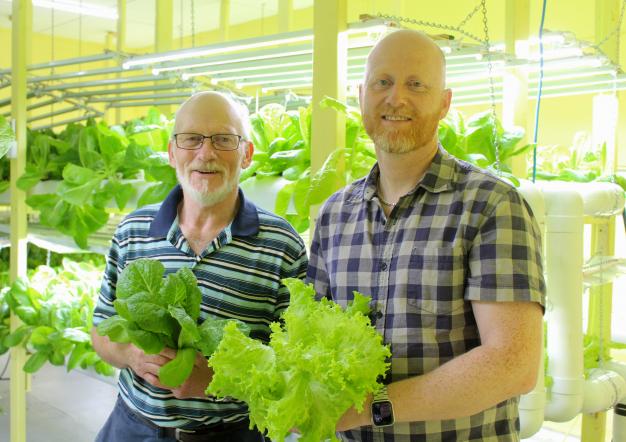 This family-owned hydroponic farm on Fogo Island is combating food insecurity by growing luscious leafy greens all year round.

Did you know that Newfoundland and Labrador imports 90 per cent of the produce we eat? While we’re fortunate to be able to enjoy peaches from Ontario, oranges from Florida and bananas from Costa Rica most of the time, our dependency on imported produce means we’re just one snowmaggedon or ferry strike away from empty supermarket shelves.

Our climate and rocky soil makes it tough to grow nutritious food, and the vast distances food must travel between small communities means higher prices and diminished quality. Increasing our food security, which exists when all people have access to adequate amounts of nutritious food, requires some ingenuity. The Budden family on Fogo Island has developed a pretty unique way of making delicious fresh produce available year-round.

Dwight Budden and his father Hayward Budden have created Living Water Farm - an indoor, controlled-environment hydroponic farm in Stag Harbour. Dwight laughs as he recounts how he got into growing fresh produce.

“I had one of these little things, it’s called a Miracle Grow Aqua Garden. It’s just a little countertop thing. I kind of picked it apart, figured out how it worked, and before long I had a bunch of my own little homemade versions in my office.”

When he moved with his family back to Fogo Island to work at the Fogo Island Inn in early 2019, Dwight recognized the need for local, fresh produce in the community, and the idea behind that little countertop contraption started to grow in his imagination. “Before long we found a building and we rented it, and then we bought it, and we’ve been working on expanding the operation,” he says.

Hydroponics is a fascinating way of growing crops without soil. Water in a controlled environment goes to work providing nutrients directly to the roots of plants, and they grow quickly and heartily.

“We use coconut fibre to start the seeds,” Dwight explains. “When they get a root down and their first true leaves, generally speaking, then we gently uproot them and put them into a little net cup - it’s just a little basket. Then that sits in a hole in the top of the pipe and there’s water flowing through the pipe. We use what’s called a nutrient film technique - basically, the water’s flowing through the pipe and recirculates all day. We monitor the water quality and the nutrient concentration, and everything the plants need we can control for.”

Inside their fully enclosed building, Dwight and Hayward can control for the right amount of light, the ideal temperature and humidity, the absence of pests, and every other variable they can think of to have a most successful crop. “We try to give the plants the best day of the year, all year,” says Dwight.

Their efforts pay off, and you can hear the enthusiasm in Dwight’s voice and he describes the variety of plants they’re able to produce. “We grow turnip greens and rutabaga greens. We grow a couple of varieties of lettuce, like Romaine and leaf lettuce. We grow basil, cilantro, thyme and parsley. We grow beet greens and sorrel and kale.”

There are lots of other things they could grow, but Dwight says that greens and salad mixes are what they’re concentrating on now. So far, supplying the inn, local restaurants, grocery stores and farmers markets keeps them flat-out busy.

“We’ve had a lot of very positive reviews. It’s very humbling,” he says. “People come to me and say, ‘I’m going to get the best greens I can get, I’m going to get them from you, fresh all year round,’ and that means a lot. We really appreciate that people have made Living Water produce a significant part of their meal planning and their diets.”

Dwight credits the provincial and federal Canadian Agricultural Partnership and Fogo’s Shorefast Foundation for their tremendous support providing expertise, financial backing and encouragement to develop hydroponics in the province. And Living Water has big dreams coming down the pipe, so to speak.

“We’ve got big plans!” Dwight says, “I fully imagine that we’ll be a multi-site operation at some point. I always got my eyes on some of the older buildings that are sitting around here on Fogo. I’m like, ‘Wouldn’t that be a wonderful place to grow some strawberries?’ Or ‘Wouldn’t that be a nice building to put all our herbs in? Wouldn’t that be great?’ That kind of thing.

“We want to do the best we can to significantly improve the quality of the food that’s accessible here, and bring some employment to this area,” Dwight says. “But right now we’re focusing on doing our best to bring fresh food to our neighbours and friends around us.”