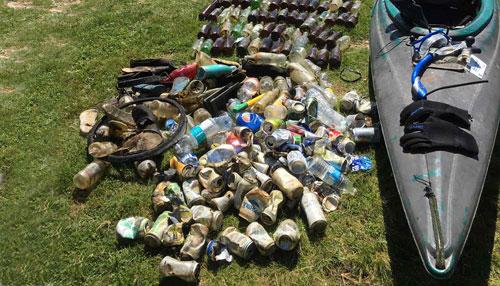 It’s amazing, and alarming, how much garbage litters the bottoms of our “pristine” ponds. Next time you head into the great outdoors, do what this man does: take out the trash.
By Tina McDonald

One day, as I was casually scrolling through my Facebook newsfeed, a post caught my attention. It mentioned a pond I used to frequent during the summer months. During the first half of my 20s, I had spent many hours rowing around this pond in my rubber dinghy, and I had never thought about how much garbage was hidden below the surface. As it turns out, there was quite a bit.

The Facebook post was by a man who’d spent the day cleaning trash off the bottom of the pond. The amount of garbage he brought to the surface sure surprised me, but it probably didn’t surprise him.

Eugene (Lou) Hynes uses his spare time during the summer months to clean up ponds around the Avalon Peninsula and beyond. During spring and fall when the ponds are too cold for swimming, he cleans up the edges of ponds, as well as beaches and the T’Railway. Such cleanups are something he started doing as a kid growing up in Twillingate, NL, picking up any trash he saw on hiking trails or beaches. He enjoyed many outdoor adventures and developed a great appreciation for nature.

Eugene’s idea for Avalon Pond Cleanups came to him in 2017. While swimming in Topsail with his stepchildren he noticed bottles, cans, golf balls, plastics etc. on the bottom of the pond. He donned his snorkelling gear and picked it all up, and brought it to shore to dispose of or recycle. A couple of days later he took the kids to Rotary Sunshine Park in St. John’s, and once again noticed the same type of trash in and around the pond. Once again, he picked it all up and disposed of it. Later the same evening, he started thinking about the garbage littering the ponds and what he could do about it. He has two kayaks and thought he could use one as a barge to place garbage in and tow it back to the shore, and that is what he started doing. He soon set up a Facebook Group called Avalon Pond Cleanups, where he showcases the trash he retrieves - about 80 per cent of which is recyclable or reusable - and gives shoutouts to the friends and family who join him.

To date, Eugene has done more than 80 pond cleanups by snorkelling and free diving, as well as more than 100 cleanups of beaches and trails, including the T’Railway. When I asked him how much garbage he has picked up so far, his response was “tonnes.” And Eugene was literal about that. He has actually cleaned more than a tonne of garbage from the bottom of our ponds, shoreline, trails and beaches, and he has the photos to prove it.

Eugene leads a busy life with a full-time job, a wife, three children, two stepchildren and three grandchildren. He and his family enjoy outdoor adventures together and, being environmentally aware, they always pack out more than they pack in. Eugene would love it if everyone did the same. He volunteers his time and resources to clean up the environment for everyone to enjoy, and the only thing he requests in return is that we leave nothing but our footprints behind in the great outdoors. To quote Eugene, “Water is life. And without clean, healthy water our ecosystem is pretty much at a standstill. One person can make a difference.”