A Place to Roam 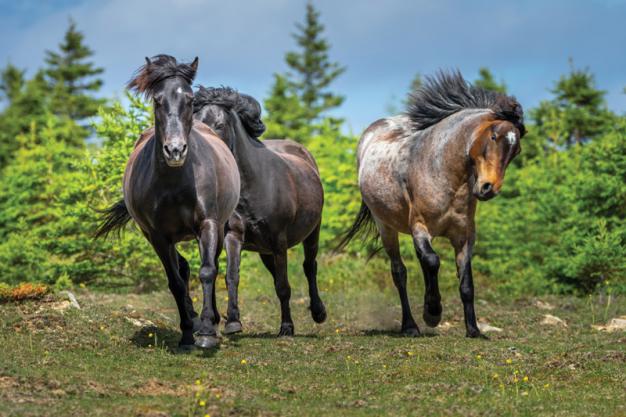 To celebrate its 40th anniversary, the Newfoundland Pony Society (NPS) has launched an ambitious fundraising project to create a Heritage Park for endangered Newfoundland ponies. This new seasonal park will provide grazing pasture, breeding space and a visitors’ area to highlight the cultural significance of this special animal.

Loss of habitat is a major threat to the survival of the Newfoundland pony, so the NPS is thrilled to have secured a 50-year lease on 25 hectares of land near Hopeall in Trinity Bay. Ponies owned by local folks will be able to run and graze freely in the summer and fall before returning home to their stables for the winter. The park is the largest initiative the NPS has undertaken in its history as a charitable organization, and work to fence the area and install a water source is already underway.

Greg Malone, award-winning actor, environmentalist and animal-lover, has come on board as honorary chair of the fundraising campaign. He’s passionate about protecting the critically endangered breed, and his affection for the ponies and their special place in provincial culture and heritage shines through. “It’s a unique breed in all the world,” he says. “They evolved here over 400 years into a perfect horse for the Newfoundland and Labrador climate. They’re sturdy and affectionate, and they’re just lovely animals to be around.”

Ponies and horses helped shape settlements and ways of life on the island portion of the province. The ancestors of the Newfoundland pony arrived with early settlers from Britain in the 1600s. These were primarily Exmoor, Dartmoor, Welsh and Connemara ponies. As Greg explains, through isolation and intermingling for hundreds of years, these ponies eventually evolved into a distinct landrace breed uniquely adapted to Newfoundland. Their distinctive physical traits that are the direct result of living in our climate. Hooded eyes and low-set tails protect them from the driving rain and snow; tough hooves and close-set front legs make them agile and sure-footed on rocky terrain; and their ears are small and extra furry to help prevent frostbite. In the past, this sweet-tempered, hard-working animal played an important role in the survival of rural Newfoundland. They ploughed fields and mowed meadows. They hauled wood for heating homes and kelp from the beaches to fertilize the gardens. Their natural intelligence, friendliness and willingness to work made them dependable companions for many, many years. 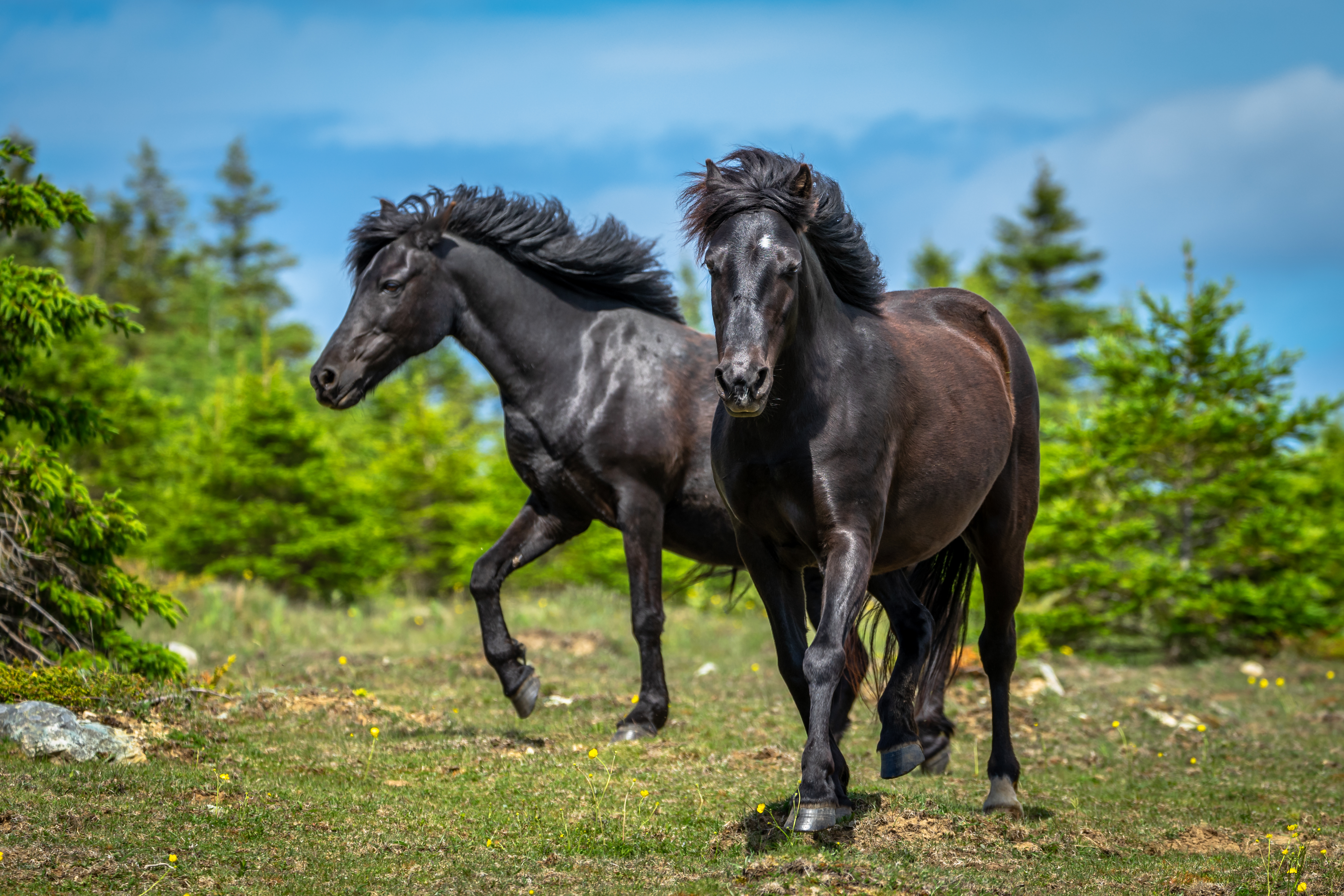 Greg recalls the beauty of wild ponies running freely on the hills, and the sweet familiarity of seeing them in gardens and meadows. “I remember I used to go to Carbonear a lot. I would see these kids on their ponies riding down Water Street - all these girls with their hair flying and smiles on their faces. What a sight! I loved that, and I wish I could see it again.”

He adds, “In the old days, of course, animals were free to roam.” However, in the 1970s, new municipal by-laws meant that the ponies could no longer wander and fences had to be built to keep them in. This was a major loss of natural habitat. Fences also led to increased costs associated with keeping ponies, and economic times in the late 1970s and ’80s were hard. Thousands of ponies ended up being sold to meat processing plants across Canada and Europe. From an estimated plentiful population of over 12,000, the number of Newfoundland ponies dropped to about 100.

“It’s a tragic story, what happened to the Newfoundland pony,” says Greg.

There are now about 500 Newfoundland ponies throughout Canada and the US, thanks largely to the efforts of the Newfoundland Pony Society. These folks know that having a natural habitat where the ponies can graze, run and breed freely is essential to their health and survival as a species today.

“Really, all they need is a little bit of pasture, a little bit of land to graze on,” says Greg warmly. “I’m sure the people of Newfoundland will be more than happy to give them that.”

The campaign for the creation of the Newfoundland Pony Heritage Park kicked off last year with a fundraising goal of $250,000 over two phases. Phase 1, the development of pasture, is in the works now. More than $50,000 has been raised to date and many volunteers have been hard at work fencing the land, rehabilitating the pasture and creating accessibility to the new park. Phase 2, set for next summer, imagines the development of a visitor centre and outdoor storyboards. The NPS hopes to welcome children and school groups to see and enjoy the ponies in their natural habitat, and maybe even have them display traditional activities in a demonstration area.
In the future, the park could serve as a destination for tourists and ponies could be promoted in the province’s marketing campaigns. “I think it’s something we could work with - all those wonderful ads for tourists, those super-saturated colour ads we see. A few ponies in those ads would increase their value many percentages,” Greg laughs. 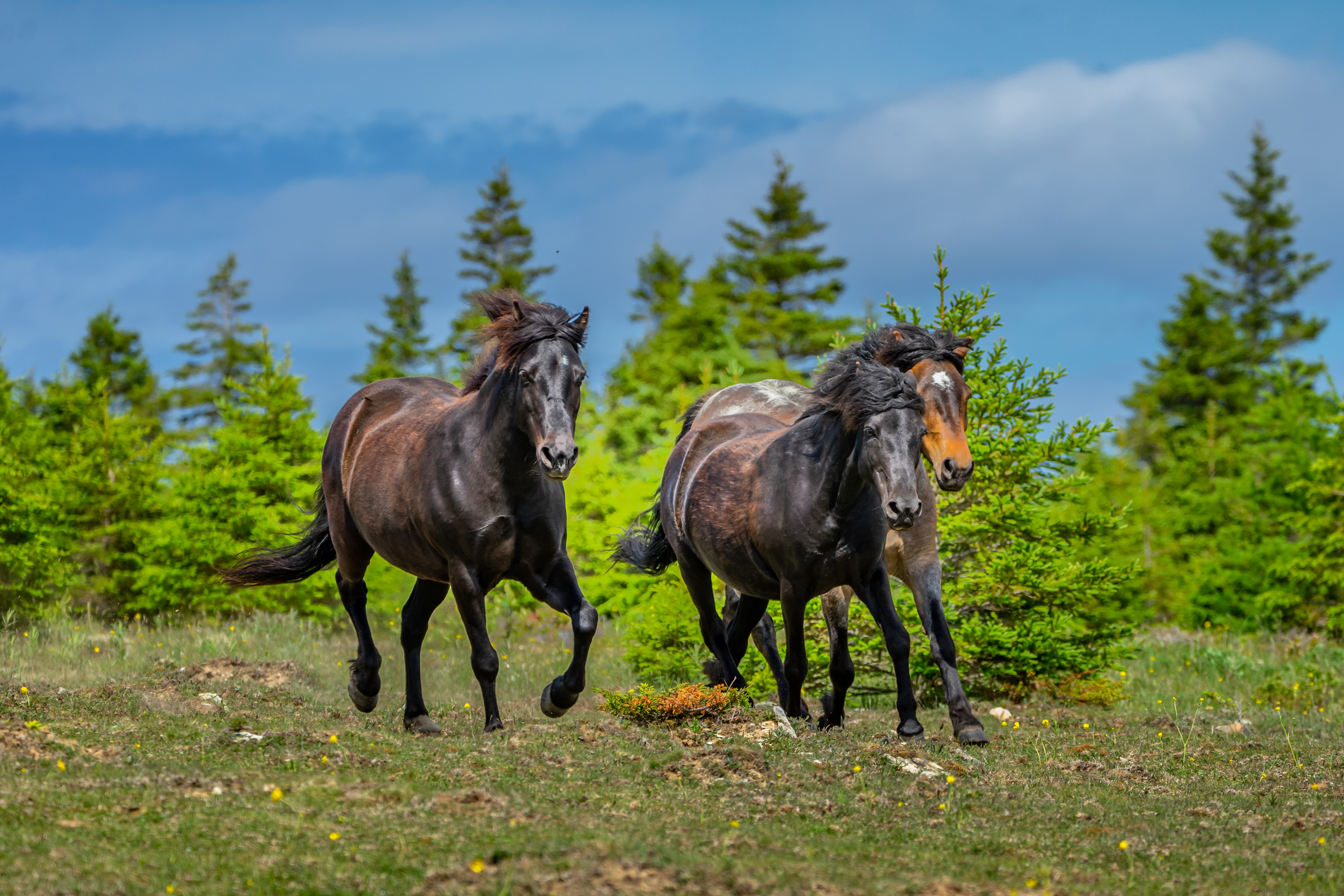 Greg feels fortunate to be able to lend his voice to the NPS and the special animals that have done so much for our province. “To have our own little pony here in Newfoundland, I think it’s just a great benefit and a great treat. I’d like to see ponies roaming wild in the hills. I’d like to see them in the parks - in Terra Nova and Gros Morne. It’d be nice, wouldn’t it? But I think the first part is to get them their own pasture. Let’s get the numbers back up to a respectable level where they’re not so critically endangered.”

To find out more about the Newfoundland Pony Heritage Park, go to NewfoundlandPony.com. There, you can learn about volunteering, donating, or getting involved in protecting and celebrating our remarkable ponies.