Why do we get ice cream headaches? 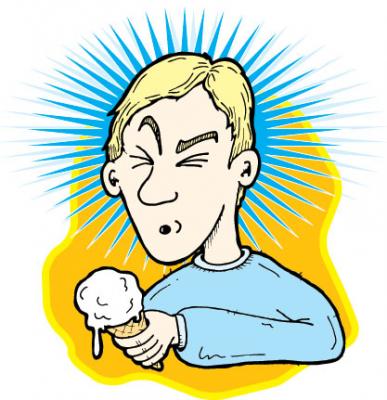 There’s nothing quite like sitting outside on a hot summer’s day and chugging back an ice cold drink, or slurping up a soft serve, to help beat the heat. While chilled treats are a delicious way to keep cool, the piercing pain that often comes when you drink or eat them too fast is a real bummer.

You’ve likely experienced ice cream headache - a.k.a. “brain freeze” or “cold stimulus headache,” or technically speaking, “sphenopalatine ganglioneuralgia” (that’s quite a mouthful) - dozens of times. But have you ever wondered what goes on in your mouth and noggin when that slushie or ice cream makes first contact? Lucy Nakibuuka, a public health practitioner in St. John’s, NL, gives Downhome the scoop.

While there’s some debate as to the exact cause of this phenomenon, she says, there does seem to be a general consensus. It all starts when the cold food or drink makes contact with the hard palate (the bony plate in the roof of your mouth) and triggers the trigeminal nerve (or fifth cranial nerve, which is responsible for providing sensations to the face), which carries the pain signal to the brain.

“There’s a nerve that’s connected to the roof of your palate that conducts that cold temperature really fast, up to your scalp or forehead. So that nerve has three branches. One goes up to your forehead and scalp; the other is connected to your palate, what we call the maxillary branch; and then the last one is connected to your jaw line. So it’s thought that when the ice cold temperature hits the roof of your mouth, there’s a very fast conduction,” Nakibuuka explains.

Thankfully, the pain (usually felt in the forehead or temples) that results from this rapid constriction and dilation of blood vessels is fleeting, typically lasting just a few seconds or minutes. (The pain that’s associated with brain freeze is known as referred pain, since the brain interprets the cold stimulus as coming from the head, rather than the mouth.) So instead of reaching for the aspirin, just wait it out.

However, if you want to kick the pain to the curb faster, you can try drinking something warm or sticking your tongue to the roof of your mouth - “as long as your tongue isn’t still ice cold,” adds Nakibuuka - to help balance the temperature. Of course, the most obvious and easiest thing to do is eat your ice cream more slowly. But then you face another conundrum: How to eat your treat slow enough so that you don’t get brain freeze, but fast enough so that it doesn’t melt?

Ice cream headaches are an interesting phenomenon; but as common as they are, we don’t really know much about them, Nakibuuka says, as there’s been relatively little research done in the area. That’s probably because, as unpleasant as they may be, ice cream headaches are not a serious affliction and generally nothing to worry about. While some researchers say brain freeze is more common in those who experience migraines, the late Dr. Seymour Diamond, who co-founded the Chicago-based National Headache Foundation, noted that most studies have found no such link, according to a piece published on the foundation’s website. Another study suggests that ice cream headaches could be more common in people whose parents experience them.

In a 1997 paper published in the British Medical Journal by Dr. Joseph Hulihan (who, at the time, was an assistant professor at the Department of Neurology at Temple University Health Sciences Center in Philadelphia), ice cream headaches occur “in one-third of a randomly selected population,” and they happen “regardless of whether someone suffers from other types of headache.” He also notes that since the back of the palate “is most likely to produce the referred pain of ice cream headache,” people can avoid it by simply keeping cold foods away from this area.

“Most people arrive at such preventative measures without the advice of doctors,” he notes. “Ice cream abstinence is not indicated.”

So the next time you’re enjoying a cool treat, slow down; hopefully, your ice cream screams will be due to pleasure and not pain.