The Captain and The Mate 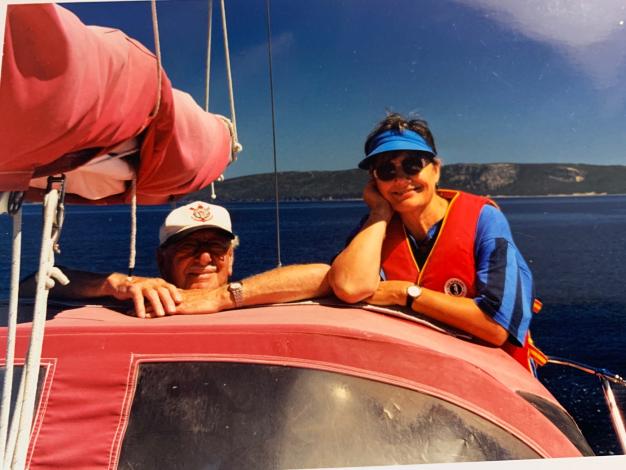 A couple’s “cruise of a lifetime” took in ports all over Newfoundland and in southern Labrador.
By Kim Ploughman

It was the summer of 1991, and a Newfoundland boat captain felt the urge to go to places he had often visited over the years - only this time, he would sail into these outports. Beside him at the helm, as his first mate, would be his life mate. A course was charted, maps were gathered and the sea dream began.

As day broke on June 27, 1991, the captain and his hesitant first mate cruised out of Long Pond, Conception Bay aboard the 35-foot sailboat, La Reine Basque (The Basque Queen). Before their summer journey ended on August 9, Augustus (Gus) and Kay Etchegary would clock 1,172 nautical miles and sail into 25 outports in Newfoundland and Labrador, as well as travel to another 15 by car.

Kay kept a daily log of their 42-day voyage. Recently, the couple reflected upon that summer when they shared what they call “a cruise of a lifetime.”

One day at a time

On the very first day of the expedition, Kay recorded her trepidation: “…I was very apprehensive about the whole idea,” she wrote. “I didn’t think I was capable of helping him and managing the boat, nor would I be able to sail offshore, period.”

Gus, on the other hand, was full of excitement and prepared extensively for their six weeks at sea around a province he knew inside and out, primarily from his longtime involvement in building the fishing industry through his work with Fisheries Products International and various boards and organizations. The death of his brother the year previous had played on his mind and inspired him to make the dream trip sooner rather than later.

With her seasoned captain, the first and only mate on the journey figured the only way through such an uncertain voyage ahead was by taking it “one day at a time.” The first day on the water was less than inspirational for the seafaring souls. They battled fog, intense winds, and numerous icebergs and growlers as they sailed to Cape St. Francis and turned southeast towards Cape Spear. The next three days were spent in St. John’s seeking refuge from the rougher elements of the North Atlantic, especially the black, dense fog hanging over the coast.

By Canada Day, it seemed they were finally on their way, but the fog, headwinds and sea ice continued to embattle their progress. They hunkered down in Fermeuse and then Trepassey before reaching St. Lawrence, with the help of the local Coast Guard and - finally - a clear night sky graced with a beautiful moon and stars.

Kay noted on July 4: “One thing about this trip for sure - nothing is routine. We eat and sleep at very odd hours.”

Over this summer they shared on the ocean and land (“surf and turf,” Kay quips), the couple entertained themselves with meeting locals and visiting friends, playing cards, eating fresh seafood (often donated by locals) and taking daily strolls through communities.

Circumnavigating the island clockwise, a direction apparently favoured by knowledgeable yachtsmen, they sailed into quaint places like St. Pierre, Harbour Breton, Isle aux Morts, Ramea, Codroy, Norris Point, St. Barbe and Quirpon, and into larger towns like Port au Choix, St. Anthony and Catalina. Looking back at the 40 outports they experienced in 1991 (one year prior to the 1992 cod moratorium being declared), they were struck by the amount of people walking around “idle,” they say.

“That’s the part that kills me,” explains Gus, who never misses a chance to talk passionately about the fishery. “So many communities badly impacted by the loss of the fishery back then, and for many, remains so today. The fishery was their bread and butter!”

On July 25, the couple steered their vessel towards Red Bay, a UNESCO World Heritage Site on the south coast of Labrador, while once again dodging “overwhelming and nerve-racking” icebergs in the Strait of Belle Isle. In her diary, Kay also recorded a memorable moment: “We were treated to a very special sight - one huge monster of a whale. I swear it was the biggest either of us has ever seen, at least 60-70 feet. It was so close to us that I was afraid it would tip the boat over if it came any closer.”

For Gus, a Basque descendent, arriving at Red Bay was the highlight of his ocean excursion. “Entering the harbour with the feeling that my ancestors had carried on a whaling operation in the early 1500s [here] gave me a real emotional high. It’s almost incredible to think that 500 years ago, 2,000 Basques were operating the largest whaling factory in the world in Red Bay.”

The couple would spend three interesting days exploring the Basque whaling station on Saddle Island and the museum guarding the tangible history of the long-ago whaling operation - ovens, piles of red tiles, shipwrecks and even graves.

For Kay, she delighted in seeing places like St. Lawrence with all the white houses, and fell in love with the “peaceful” ports of Harbour Breton, Francois and Bonne Bay. On August 2, they witnessed a historical moment when the rebuilt Viking vessel, Gaie, sailed into L’Anse aux Meadows. In her diary, Kay wrote, “We waited and took photos of people crowding the small wharf and the hundreds of cars all over the place. It was truly a historic moment. Half an hour after their arrival, we attended the cake cutting by our premier, Mr. Wells, and Iceland’s president and officials from Norway.”

From there, they continued to navigate the northeast coast. On August 9, they finally nosed La Reine Basque into home port at Long Pond.

Reflecting back, Gus, now 97, describes “observing the most breathtaking scenery anyone can imagine,” adding, “Kay and I have had the opportunity to visit many places in all parts of the world and we have enjoyed ourselves, but we can honestly say that no travelling experience can match our 42 days around Newfoundland and Labrador.” 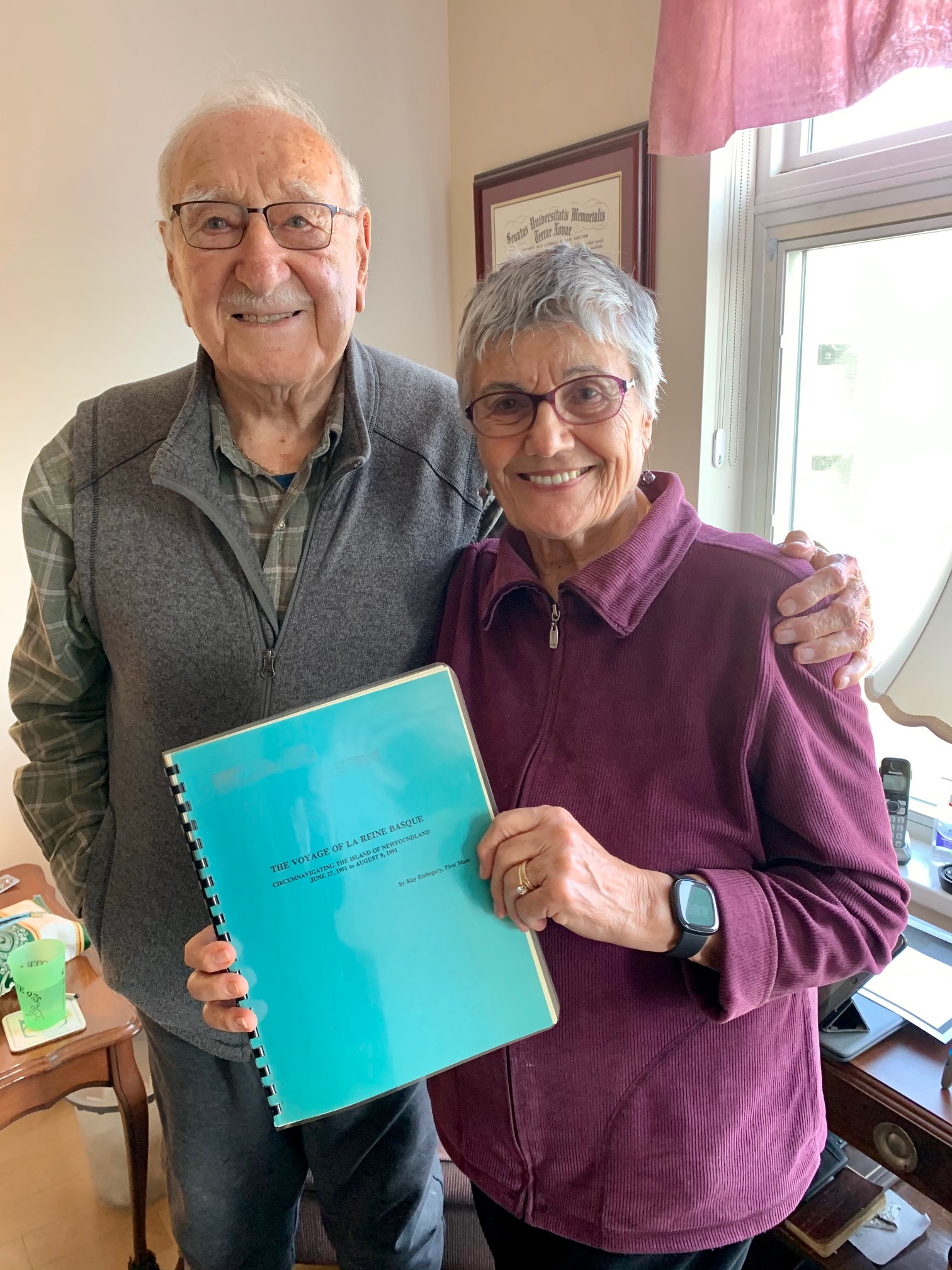