Avid kayakers share some of their favourite paddling spots in NL

Weaving through a cathedral of dual stone arches, I glide past the huge sea cave visible only at low tide before threading a needle past a turbaned stone-faced man guarding the narrow entrance to a tiny hidden cove where a river greets the sea. Once known as Turks Gut, this section of Marysvale is stepped in stories of a ghostly drummer boy, narrow escapes and, best of all, a small Turkish pirate ship hiding here to avoid capture by the naval authorities.

In a province as vast as Newfoundland and Labrador, there are countless coves, boundless bays and bights, hundreds of haunting harbours, and secluded spots by the score that would make a top list of places to sea kayak. It is an almost impossible task to choose only a few, but I reached out to one of the most experienced and qualified kayakers in the province and the country for his choices of favourites. Richard Alexander (co-founder of The Newfoundland Kayak Company) is the first and one of only four individuals in Canada to hold the highest sea kayaking certification possible (level 3 Instructor Trainer). He is the author of Paddle Canada’s Coastal Canoeing program and over the years he has delivered more than 175 courses under Paddle Canada’s nationally accredited curriculum, certifying thousands of individuals. Additionally, Richard’s wilderness travel experience includes a sea kayak expedition up the west coast of Greenland that finished 400 miles north of the Arctic Circle.

Richard has very precise guidelines on what constitute a great kayaking “spot” for him. Namely, it should be relatively small and specific (not a large area like the entire Bay of Exploits); it must be very unique; and it can be visited by variety of paddle craft, but has to be little known or difficult to get to. You won’t find many tourist locations on Richard’s list of sea kayaking spots, which tends to be for expert level experienced paddlers.

The spectacular remote South Coast of Newfoundland holds a particular fascination for him, and Cape La Hune is high on his favourite places list. “A picture of the bow of my kayak with Cape La Hune in the distance occupies a cherished space on my desk at work. And rightfully so. It is, in my humble opinion, the most spectacular and beautiful spot on our island. The area is actually two headlands of hills, cliffs, sea stacks and beaches guarding the entrance to two fjords, the biggest of which is 13 kilometers long,” he writes by email to me. “Located between the communities of Francois and Grey River on the South Coast, there are no roads or boat loads of tourists photographing the fjord, hills and cliffs of Cape La Hune. There is only wilderness. You have to work very hard to get to Cape La Hune, and that effort makes the sight even more impressive. The best day of paddling of my life was spent rounding the Cape and camping on its beach. I will cherish that day for the rest of my years.”

Resettled communities also hold special appeal for Richard. “Grand Bruit, 75 kilometers east of Port aux Basques, makes this list because of its ‘newness’ and size. Officially ‘shut down’ as a community in 2010, Grand Bruit feels as if the people living there just stepped out and will return at any moment... Grand Bruit is spectacularly beautiful and eerie at the same time.”

For those wanting a much more technical, expert-level challenge, Richard adds, “I consider the Norman’s Head tide race in sea kayak to be the best tide race on the island -- hands down. Located just west of Burgeo on the south coast, Norman’s Head can produce eight knots of current flowing directly into the open sea. Waves one metre-plus will form on big tides in flat calm conditions. Any sea state will make the race bigger, confused and more dangerous.  People have died here. The spot is so treacherous the locals dug a canal with pick and shovel to avoid this spot. My advice to people visiting it is always, ‘It is OK to sit on the beach and look at it. You don’t have to paddle it.’ Water like this commands great respect.”

Richard concludes his list with an unforgettable place to travel and camp by kayak. “For me, it is Otter Point -- a non-descript piece of land jutting out into the sea on the Southwest Coast of the island. There is nothing special about it. No dramatic fjords, tide race or sea cliffs. Yet for me and my group of friends, it is the standard by which all other camps will be compared. After a tough day of bad conditions, we were exhausted and looking for a place to camp. Then, out of nowhere, just when we needed it, a little sand beach appeared at Otter Point. We landed out of necessity. Looking around we realized that we had stumbled onto the world’s perfect campsite. A level bed of crowberry provided a perfect place to pitch our tents; a small beach with a year’s supply of driftwood next to a natural fire pit made the camping effortless. On top of that, the wind dropped, sun came out and the temperature soared… To this day, we continue to paddle in the hope that all those intangible variables will again come together to create another Otter Point.”

Switching gears to get a perspective from a newer sea kayaker, I chat with Barb Parsons-Sooley, owner/operator of Wind at Your Back Guided Adventures based out of Hearts Delight-Islington in Trinity Bay. Through her adventure tourism company Barb offers guided sea kayaking, guided hiking and what she calls a lazy river rafting experience.

“Spread Eagle has a colorful coastline with an amazing sea stack. We also visit an isolated area called Marleys Cove that was a hub for forestry and coal mining 100 years ago.”

“Another place I’ve kayaked that was an out-of-this-world experience was around the coast of Bell Island. It’s just so breathtaking and surreal looking at the stark cliffs looming above you.”

“Kayaking on the Eastport Peninsula in a very small fishing village called St. Chads is magical. It’s a closed-in harbour with only one small opening out to the open sea. There is an island in the middle of this protected harbour; you’ll find a small waterfall and a quick hop over rocky beach and you’re in a freshwater pond at the edge of the harbour. Just amazing

“I can’t leave Cape Broyle off of my favorites list. It’s the place where my love affair with sea kayaking began. One simple kayaking tour with Stan Cook and I was hooked. I’m thankful that I had this experience and I hope to do that for others. It’s a magical shoreline of waterfalls and caves.”

“My hometown of Bay Roberts is another of my favourite places. It’s a beautiful kayak along the shore in Conception Bay. It’s a feeling of connection when paddling to Fergus Island or along French’s Cove, where I know my ancestors rowed boats to their fishing berths for many years. Clear waters with stunning depths and heights of cliffs.” 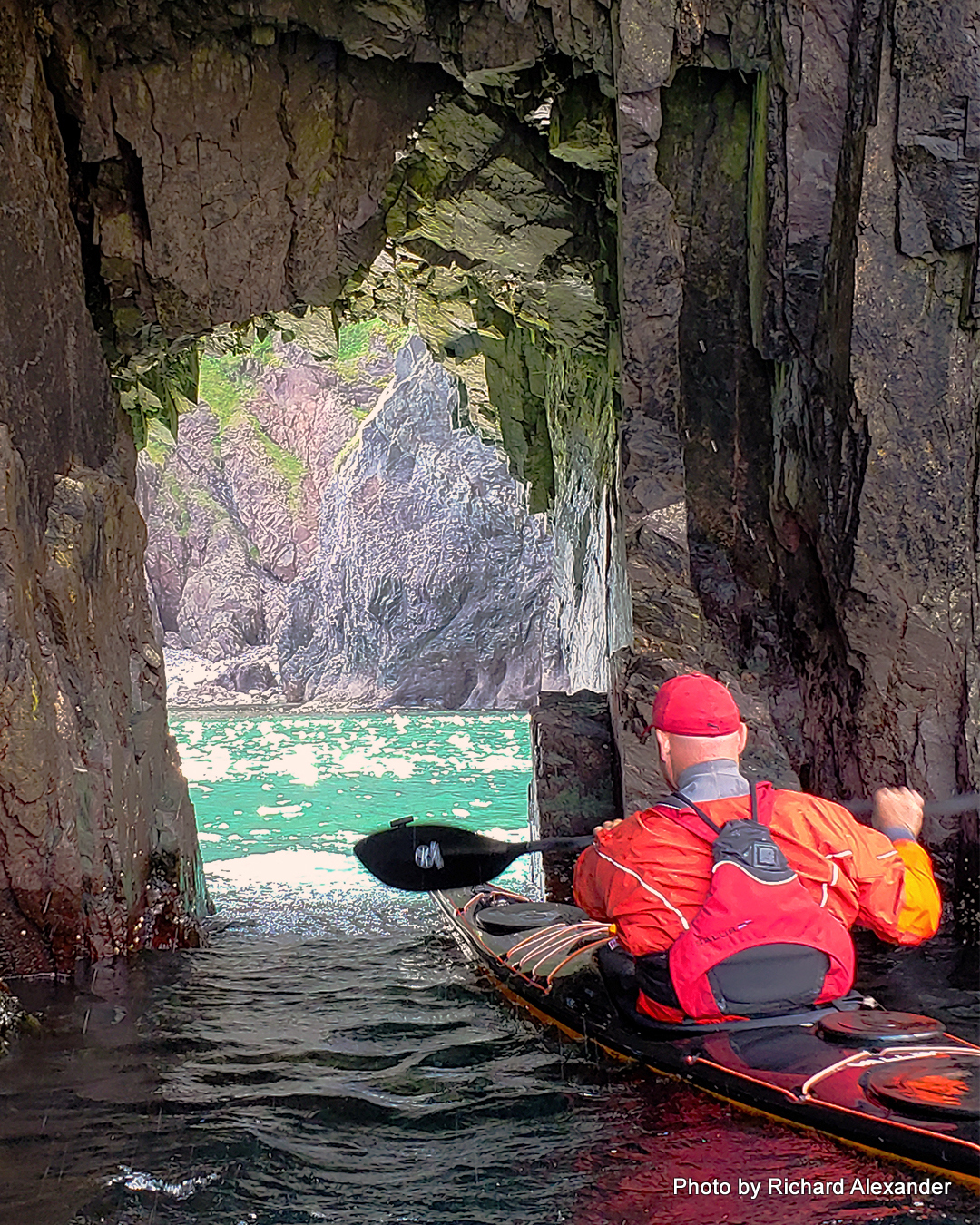