Life After Loss: the Legacy of Five Men Lost at Sea 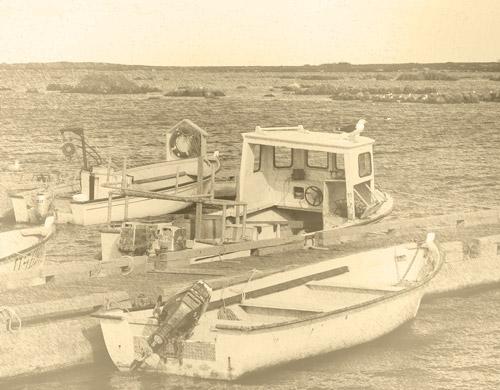 Tragedies happen every day, but when one strikes a small town, everyone feels it. On February 3, 2003, a dark cloud of grief rolled in and covered the small fishing town of Musgrave Harbour. It was the day that families lost their brother, father, grandpa, husband, friend, and so much more than what mere titles can express.

What was supposed to be just another duck-hunting trip turned out to be the last these men would take together. Six men headed out on the water. Only one returned home. Drowned at sea were Roger Hann, 36; Draper Fahey, 24; Irving Faulkner, 59, and his two sons - Danny, 35, and Darren, 31. Irving’s other son, Dion, 38, managed to swim to a nearby island where he was rescued by passing fishermen.

I was six years old at the time, and I remember it as the first time I saw my dad cry. He had just gotten the call from back home that a boat had capsized and his former classmates, friends and neighbours had drowned. Nine years later, my family and I moved to my dad’s hometown of Musgrave Harbour, and I become great friends with some of the kids and grandkids of these men.

Today, those children are grown up and some even have kids of their own. I did not get to know everyone affected personally in my three years in Musgrave Harbour, but a few have become great friends who I know will be lifelong. One thing I can say about all of these people is that they share in this tragedy and they all continue to be a shoulder to lean on for each other.

My best friend, Amanda Goodyear, is the granddaughter of Irving and the niece of Danny, Darren and Dion. She has a family of her own now, but reminisces on what could have been.

“Anyone who knows our family knows how extremely close we all are. I really wish my Pop was around for all of the big events because I know he would have never missed them,” says Amanda. “My skating competitions, school concerts, graduation and so much more. No matter how far away it was from Musgrave, he travelled from one side of the island to the other with us. Now I have a son and a daughter of my own, and I would have loved for him to have met them. My son is five now and he asks questions about his Pop Faulkner all the time. We know he’s still here, even though we can’t see him. Of course, this goes for my Uncle Danny and Darren as well.”

Amanda’s cousins, Danielle and Katie-Lynn Faulkner and Alex Viselli, all daughters of Danny Faulkner, share different memories of their father. Danielle was only three years old and Katie-Lynn was six months old at the time of Danny’s death.

“My dad and I were very close,” says Danielle. “I don’t remember a whole lot from my childhood. It’s been really hard because I wish he could be there to see each milestone.”

Says Katie-Lynn, “Everyone says that my dad’s love for his girls was so strong and he loved to show us all off. It’s been a battle to say the least, always wishing he could be here to watch us succeed with each milestone and support us through everything that comes our way.”

Their older sister, Alex, was 15 in 2003, so she holds a more vivid range of memories of her father.

“Unlike my sisters and cousins, I was fortunate enough to have more memories of him from my childhood,” says Alex, reminiscing. “He was loving, protective, silly and adventurous. He would do anything for his girls. From the age of six, I lived in Toronto with my mom, so I only saw him during the summer and some March breaks. But those times with him were filled with so much love and fun. He did everything he could to always keep me smiling, from a fridge full of lobsters to fast rides on the four-wheeler.”

I was also lucky enough to know Kyle Faulkner, Darren’s son, when I lived in Musgrave Harbour. I’d look forward to seeing Kyle in the high-school hallways; if you were having a bad day, you weren’t anymore because his smile was contagious. The one thing I know for sure is that he has a smile just like his dad.

“I have many memories, but some of my favourites would be when we would take our Ski-doo to the cabin and rabbit snare together. I cherish these memories because I still enjoy to do all of these things that I first did with my dad,” says Kyle, who was five years old when his dad died. “This situation made me realize that anything can be taken away at any time, so it is important to appreciate each day we have on this earth.”

Roger Hann lives on in his two sons, Josh and Tyler Hann. Josh was 14 and Tyler was 3 when their father passed.

“My dad was a kind, easygoing, hardworking and loving person - everyone tells me that I am just like him,” says Tyler. “I’d love for him to see how much I have accomplished and endured in my life. There’s been countless times where I’ve felt like I haven’t had a leg to stand on, but I always got back on my feet and pulled through because I know he would be proud.”

Draper Fahey did not have any children, but he is remembered as a kind man who is deeply missed by his family.

Another dear friend of mine to this day is Myles Faulkner, the son of Dion. Myles’s story is different from the rest. His father survived, and something that he lives with to this day is the “What if?” question.

“I have learned so much from my dad. If he had not lived I probably wouldn’t do the things that I do because I wouldn’t have learned how to hunt or how to boat. He has taught me how to do all of the things we love, and it makes it even more special that we can do these things together. I know that he lives his life for me and wants me to enjoy my life because, despite everything that has happened, he does the things he loves and I think he enjoys his life,” says Myles. “I’d love for Pop to see that I fixed his Argo and that I’m still using it. For uncle Danny to see that I’m a diver just like him. For Uncle Darren to see how Kyle turned out and how we are still such good buddies. I think they would all be very impressed with the fact that Dad has continued to enjoy life despite experiencing such a loss.”

A year after the accident, Dion fixed up the boat that once held such a painful memory. He used it to create new and lively memories for his son, nieces and nephews, and friends of those lost. That boat was used until three years ago, and now that engine runs Myles’s boat.

One thing I’ve learned from the experience of my friends is that tomorrow is never promised. And I got a real glimpse of how strong individuals have navigated the bumpy and unpredictable road of life after loss. I am inspired by how they have all prevailed from this hardship and how the families of all the men lost have made sure that their legacies live on.

I truly appreciate the personal insight of this story, it's gives people the understanding that life is truly unpredictable and we have to remember to enjoy life & keep pushing forward. Great story !!