It’s easy to understand why a province as colourful as Newfoundland and Labrador is home to so many artists. There’s inspiration everywhere you turn. For local artist Jon White, it was a family trip to Twillingate in the summer of 2018 that inspired him to get creative. After an outing to a nearby beach resulted in small haul of colourful sea glass, he had the idea to turn those natural materials into pieces of art, and that ultimately led to his new business, The White’s Emporium.

Originally from Newtown, also on Newfoundland’s northeast coast, Jon is a nurse by profession and spent most of his career nursing offshore. That changed when he began running the Emporium full time in September 2020.

His shop is online, operating from The White’s Emporium Facebook page. He specializes in carved driftwood art often surrounding Newfoundland themes, but if a customer has a specific idea in their mind, he will create it in his home-based workshop in Twillingate.

“I probably have one of the best views when I step outside,” says Jon, whose house overlooks the harbour. “It’s not hard to get inspiration when you live around here.”

Jon says before the COVID-19 pandemic, Twillingate was frequented by tourists and had a certain liveliness that he found attractive. After visiting his sister, who’d moved there in 2015 to teach, he knew it was the perfect rural town for him and his wife and their three small children to call home.

The Emporium became a way for Jon to feed his creative desires while supporting his family. “All my interests kind of marry into one thing, which is the Emporium,” says Jon, explaining that he makes and sells more than just driftwood art. He also works with sea glass and textiles, and he’s been working on his power carving skills.

Jon says that having a creative outlet was something he was craving. As someone who grew up in a construction family, the hands-on aspect was an important part of that. He says he’s very fortunate to be in his current position.

“I don’t consider this work, it’s like doing a hobby for a living. There is no bad part about coming to work out here. You’re using your hands, being creative - I couldn’t be happier,” says Jon.

He regularly makes some happy customers, too. Kelly Hynes reached out to Jon about creating a very personal, sentimental piece in honour of her father, who died in December 2019.

Kelly is originally from Shoal Harbour and says her dad’s favourite place to be was by the water.

Kelly worked with Jon for about a month on the details for this specially commissioned artwork. She says Jon captured everything she envisioned and more.

The piece Jon made for her is of the shoreline where her father’s ashes were spread. In the foreground of the scene is a white dory. The boat’s reflection on the water, in Kelly’s eyes, looks like a piece of heaven shining through. 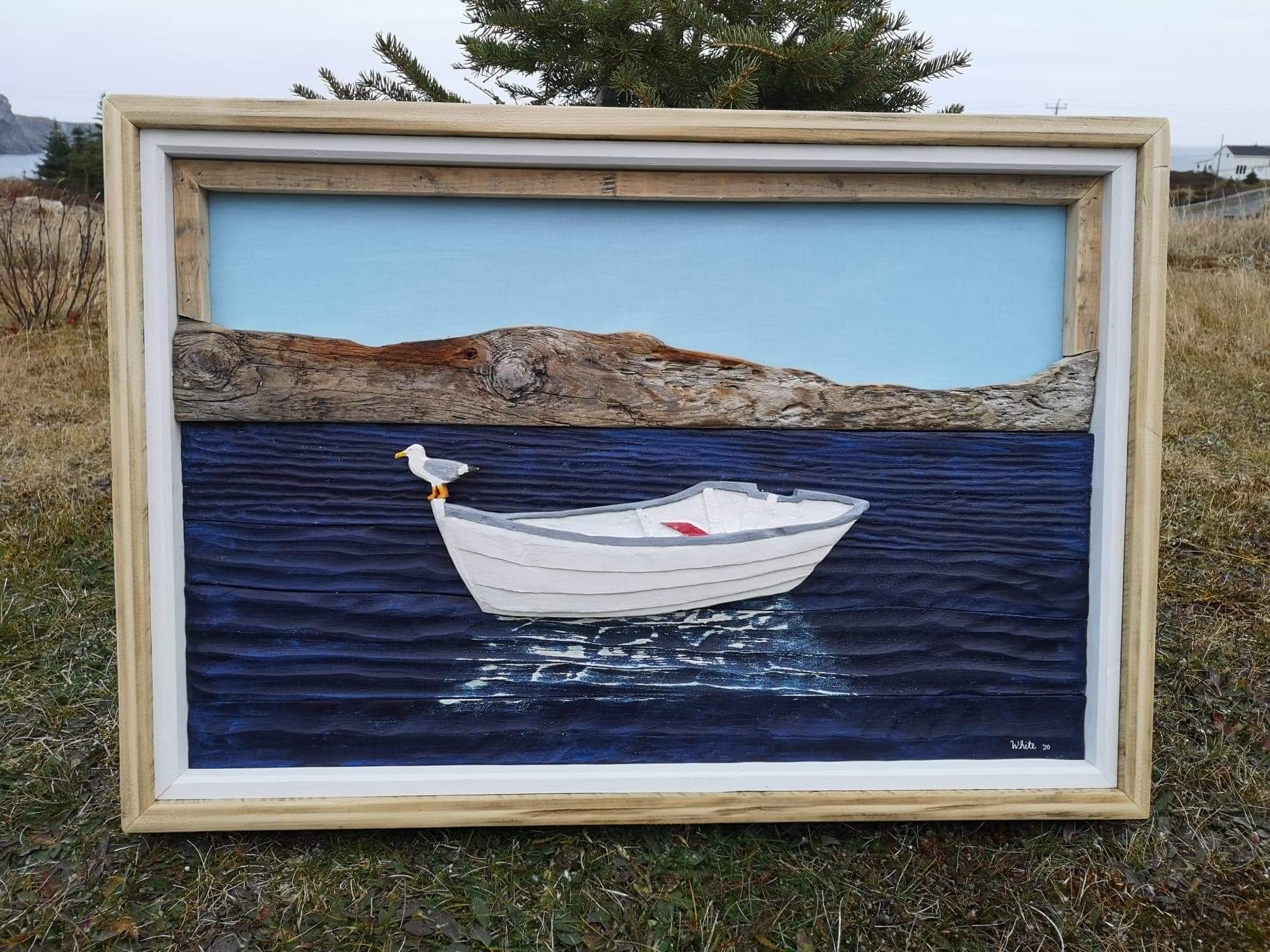 “When Dad died, written in his will actually - and he always said it - ‘if you ever want to feel close to me, go to the water,’” says Kelly, holding back her tears. “It’s my personal commemorative piece as a reminder of him.”

Jon says he always tries to work very closely with his customers and that being able to create pieces that hold memories for clients is the most gratifying part of the job. He often thinks about his work carrying on through the years.

“That, to me, is gratifying: that your work is putting a positive impact on people’s lives and helping them remember certain people or places,” he says, “something that can be carried on for years to come.”