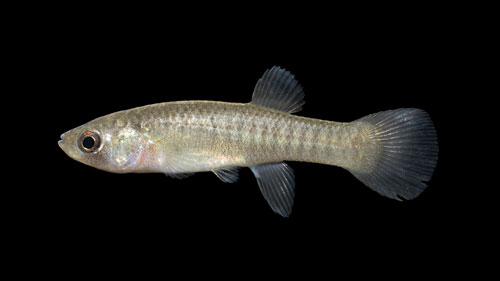 When I was a kid, I spent a lot of time at my uncle’s cabin on the banks of Freshwater Pond on Newfoundland’s Burin Peninsula. While there I always enjoyed the warm summer days spent wading in the shallow waters, navigating through the pond vegetation, and catching sticklebacks and small striped fish I would call “tiger trout.” I later found out my “tiger trout” were banded killifish, and at that time they were only known to inhabit a few water systems in the province.

The island of Newfoundland is home to two species of killifish, the banded killifish (Fundulus diaphanous) and the mummichog (Fundulus heteroclitus), both of which are very similar in appearance and size, and may be found schooling together. Because of this, it is often difficult to distinguish between these two native species.

The mummichog (a Native American word for “going in crowds,” for how it travels in large schools of sometimes hundreds of fish) may also be known as chub, salt water minnow, mud dabbler, marsh minnow, mud minnows, mummies, gudgeons and common killifish. What also sets the mummichog apart, though you wouldn’t know it to look at it, is that it was the first fish species to swim in outer space.

In 1973, a pair of mummichog were flown into space in a plastic bag aquarium aboard SkyLab, during the SkyLab 3 mission. At first they showed some difficultly swimming due to the gravity changes, but after 22 days they swam normally. Fifty mummichog eggs at advanced developmental stages were also taken aboard the space craft, and 48 hatched during the flight. The hatchlings showed no effects from the space travel and swam normally.

Mummichog are slightly larger than banded killifish, usually measuring 7.5-9 cm, but can reach lengths of up to 15 cm. The thick body is elongated and highly variable in colour. Colouration may change with the substrate, but is generally olive brown or olive green, with thin, wavy, silver bars on the sides. (Banded killifish have irregularly spaced black and silver bars.) The colours are more intense in the males during breeding season as the sides become steel blue with silvery bars, the undersides turn yellow or orange-yellow, and the dorsal fin becomes mottled with a small eyespot near the rear edge. (Male banded killifish turn bright blue during mating season.) Females are paler without the intense colours, and their dorsal fin is uniformly coloured. Like the killifish, the mummichog’s mouth is upturned for surface feeding. Most are sexually mature at two years old and around 3.8 cm; their normal lifespan is about four years.

The banded killifish has a wide distribution in eastern North America, ranging from South Carolina to the Atlantic provinces. In Newfoundland, there are currently 42 (10 until 2015) known populations in isolated locations around the island, including the Burin Peninsula, Indian Bay watershed, Ramea Island, Grand Bay West, Loch Leven, Stephenville Crossing, St. George’s Bay and York Harbour. There is also an introduced population on the Avalon. They are typically found in quiet, shallow water less than one metre deep, near vegetated areas of ponds, lakes, rivers and estuaries with sand or gravel bottoms. While they are primarily a freshwater species, they can tolerate brackish water.

The mummichog, on the other hand, are widely distributed along the Atlantic coast from the Gaspe Peninsula, Anticosti Island and Port au Port Bay in the north, to northeastern Florida in the south. They are also present on Sable Island off Nova Scotia. They prefer areas of brackish water, usually in saltmarshes, muddy creeks, eel grass or cordgrass beds, sheltered shorelines, estuaries and tidal areas, especially where vegetation is submerged. A few landlocked populations do exist in freshwater lakes near the shore such as Digby Neck, Nova Scotia. They can tolerate highly variable salinity, temperature fluctuations from 6-35⁰C, very low oxygen levels and heavily polluted waters.

During cold months in northern ranges, mummichog move to upstream tidal pools and burrow up to 20 cm into the mud to overwinter. They can also bury themselves in mud if caught in drying pools between tides, even travelling short distances over land to get back to the sea.

How they live and die

Both species spawn in spring and summer, and where their ranges overlap they’ve been known to interbreed. A banded killifish -common food for brook trout, Atlantic salmon, American eels, kingfishers, herons and mergansers - will lay 50-100 eggs. These fish are susceptible to habitat changes in the sediment and water flow, often the result of land use and development, road construction and forestry activities. And they can be threatened by motorized watercraft activities and removal of aquatic vegetation. As a result, banded killifish hold the distinction of being the only freshwater fish of special concern listed by COSEWIC in Newfoundland.

Female mummichog will spawn up to 740 eggs, in clutches of 10-300 eggs. It is not known how habitat changes affect their mortality, and their populations are currently considered healthy.

Both species are omnivorous and have very similar diets that include small crustaceans, insects, larvae, nymphs, mollusks, turbellarians (flatworms), mosquito and mosquito larvae, midge larvae, water fleas, copepods, amphipods, very small fish, fish eggs, diatoms, algae and plant material. Mummichog, which can consume up to 2,000 mosquito larvae in one day, have even been used as an attempted biocontrol for mosquitoes in some areas.