Cyril and I married in February 1968. Three years later we welcomed our first son, Keith. I purchased a little blue suit for him and took a picture. When he outgrew it I put it away. Three years later another son, Dwayne, was born; out came the suit and we took a picture of him. The suit was put away again. Seven years later, Gary was born and another picture with the blue suit was taken. Then six years passed and along came Matthew. Well, of course, the suit was taken out and another picture was taken. When our first grandson came to Newfoundland to visit us, he had a picture taken with his dad’s suit on. Then grandson number two was born and another picture was taken. Then lo and behold, we had a granddaughter. Her mom made sure that this little girl had her picture taken in the blue suit also! Eight years later, her little brother had his picture taken wearing the same suit.

In 2018, we celebrated our 50th wedding anniversary and our sons decided to surprise us with a picture of them now in their 30s and 40s. One of them had purchased a blue t-shirt and gotten someone to make it as much like their babysuit as possible. Each of them had his picture taken with this shirt on and presented it to us at our party. What a splendid surprise!

We still have the original suit. Who knows who will wear it next! 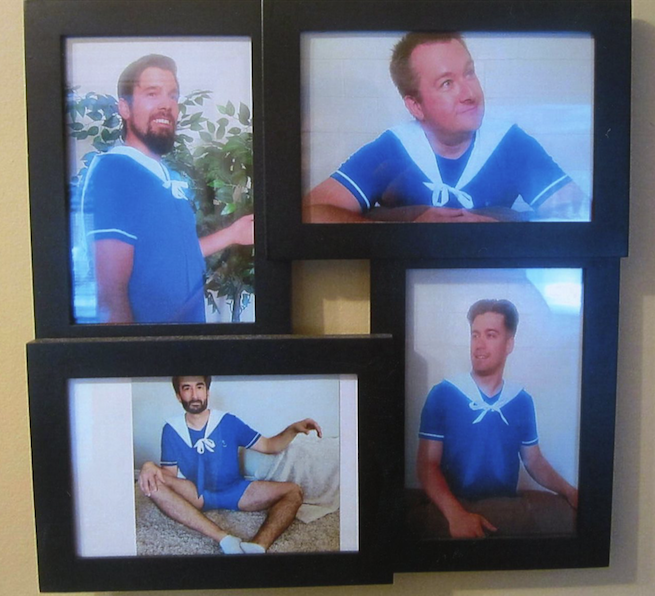 These photos gave us the best laugh! Thank you for sharing your family story of the now famous blue suit. Anyone else try to recreate photos from their childhood? Send us your best then and now photos! Email us at editorial@downhomelife.com, or mail your photos and story to Downhome, 43 James Lane, St. John’s, NL, A1E 3H3.