2020 Submission of the Year 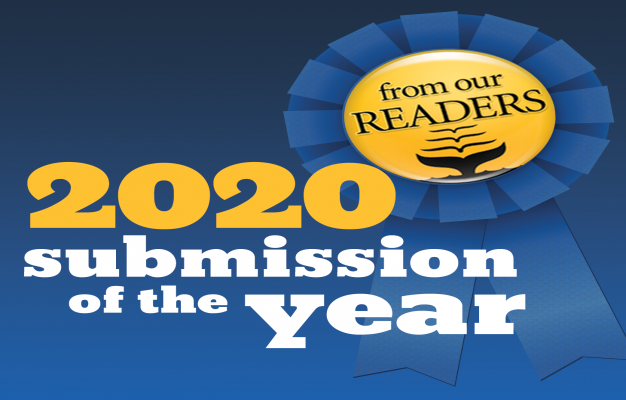 Thank you to everyone who helps us create Downhome magazine every month by contributing personal stories and photos. Downhome would not be the same without you. Of all the wonderful submissions we published in 2020, these two have been chosen for a $500 shopping prize and the title Submission of the Year. We award prizes to submitters every month, including a $100 grand prize. Get in on the winnings by sharing your photos and stories at Downhomelife.com/submit.

With so many eye-catching photos among this year’s finalists, it was a tight race to the finish in the public online vote. This photo from the October 2020 issue, captioned “Taste the Rainbow,” emerged victorious! Congratulations to Trina Hillyard of Paradise, NL. Trina has won a $500 shopping coupon redeemable in our St. John’s and Twillingate Downhome stores, and online at ShopDownhome.com. 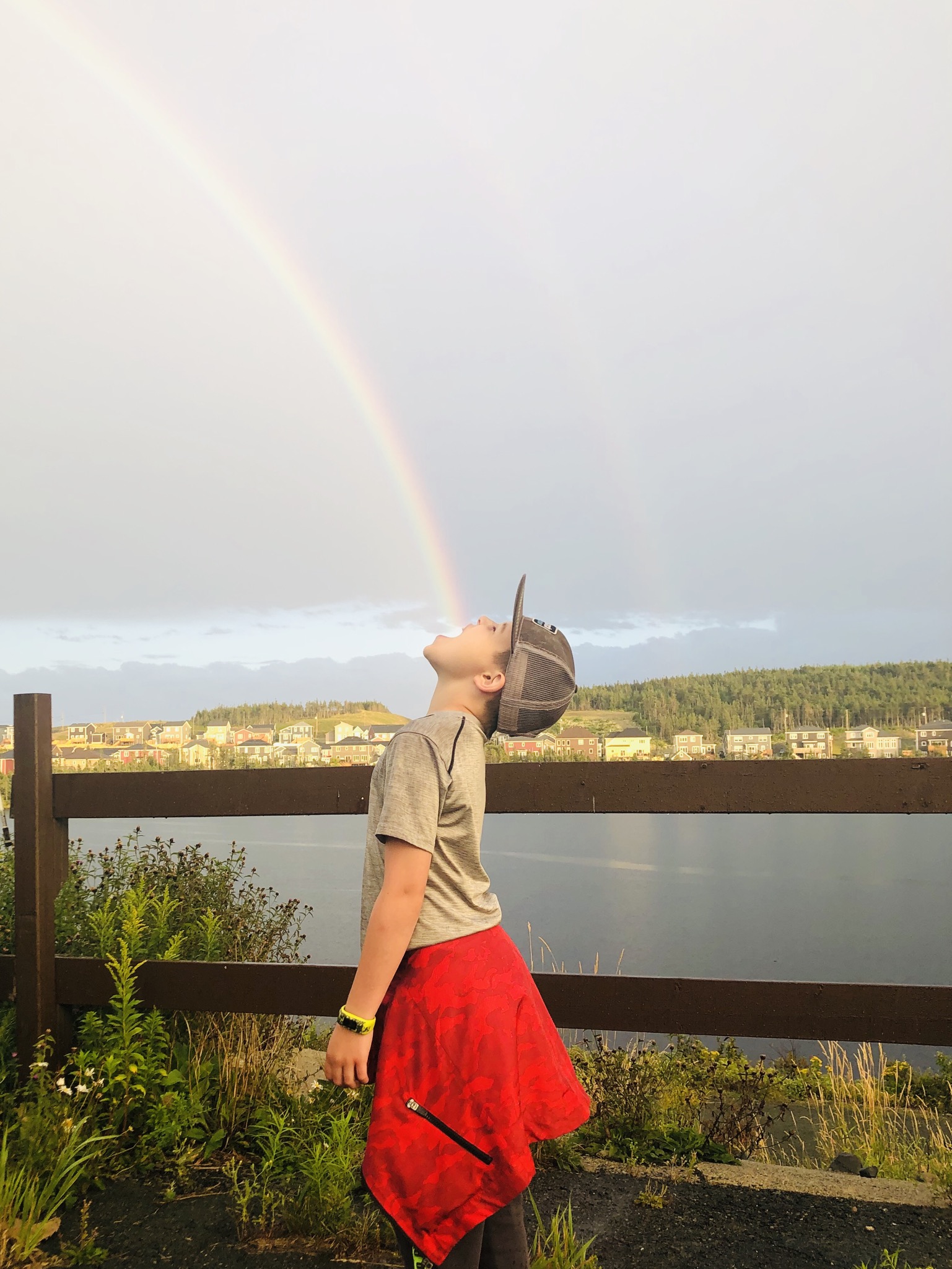 Best Story of 2020
Over the past year, readers have made us laugh, cry, wonder and admire with their original stories and poems. Of all that we published in 2020, the editors ultimately chose this article as Submission of the Year for highlighting (and perhaps introducing) the interesting life of an influential woman in Newfoundland and Labrador’s history. Ena Constance Barrett was a Scottish war bride who had a tumultuous early life that no doubt enriched and informed her writing career and resulting literary legacy. The article was written by her granddaughter, Helena Barrett MacLean, who will be receiving a $500 Downhome shopping coupon for her win. Here is “The Poet Laureate,” first published in the January 2020 issue.

Ena Constance Barrett’s tumultuous life in Scotland, enduring two world wars and discovering Newfoundland as a war bride all brought sorrows and delights that inspired volumes of her poetry.

My grandmother, Ena Constance Barrett, was once known as poet laureate of Newfoundland. She came from Perthshire, Scotland in 1920, the war bride of John A. Barrett of Curling, in the Bay of Islands. She had, up to this point in her life, known much loss and sadness and, unfortunately, even more tragedy was to follow in the years ahead. Despite the sorrows she experienced, Ena always had a passion for life, much love for family and friends, and a strong bond with Scotland and her adopted home, Newfoundland. She took great joy in nature, had a strong faith and always had hope for the world. All of this was reflected in the hundreds of poems she wrote and which were widely published throughout her life.

Ena was born in Leicester, England, on January 14, 1893. When she was seven months old, her mother died and she was taken to near Liverpool to become the ward of her mother’s sister and husband, Constance and Arthur Culbard. Her half-brother, Jack, who was two years older than Ena, went to live with his father’s sister and her husband in London. Ena and Jack never saw each other again.

She was now known as Ena Constance Culbard. Unfortunately, Constance Culbard died in 1902, and her husband, Arthur, passed away in 1903. Once again, Ena was displaced. This time she was taken to Dunkeld in Scotland, to live with Arthur’s widowed mother and spinster sister, Jessy.

It seems that Ena enjoyed a loving home with the elderly Mrs. Culbard and her daughter. There she received a typical young lady’s Edwardian education under the guidance of a governess. There, in the scenic Tay Valley, she was inspired to begin writing poetry. Her first published poem, “The Little Road of Life,” appeared in an English newspaper in 1913. Before long, her poems were widely published in newspapers and magazines in Scotland and England. A volume of verse, Rainbow Thoughts, was published by Rosemount Press in Aberdeen in 1915. A booklet of poems called On the Old Drove Road came out two years later.

It was during the First World War that she met her future husband. She once wrote in 1960, for the Evening Telegraph, about her life in Dunkeld before and during the war. She reminisced about the war years and the “happy little gatherings in the manse by the river, around the piano singing the old war-time songs. Being seen home" sometimes a long way home.” One might imagine her meeting the handsome John Barrett there in his uniform of the Newfoundland Forestry Unit.

They married on June 17, 1920, in the beautiful Dunkeld Cathedral and soon left for Newfoundland. Miss Jessy Culbard had died six months earlier. In 1921, they returned to Dunkeld when Mrs. Culbard, Ena’s last tie to her “adoptive” family, passed away. As Ena was expecting their first child, they stayed until after John Hamilton’s birth on January 18, 1922. Once again they left Scotland, now for the last time, and settled in Curling, NL, where three more children would eventually be born: Arthur, David and Rose.

Through all the changes " from leaving her beloved Scotland and adjusting to life, marriage and motherhood in a new country " Ena never ceased to use poetry as a means to express and share her most intimate feelings, her joys and sometimes her heartaches. In 1929, another volume of poems, Lilts of Newfoundland, was published, and it left no doubt that she deeply loved her new land.

Both world wars inspired some of her most powerful and meaningful work. One of her very poignant poems was written after the loss of her son, John. He had been a gifted student and musician who graduated in science from Dalhousie University, the youngest ever to have done so at that time, 1941. He then joined the RCAF, earning his wings and the rank of Pilot Officer. On October 14, 1942, he was bringing his bride of two weeks to Newfoundland, where his family eagerly awaited their arrival. In the wee hours of that morning a German U-boat torpedoed the passenger ferry SS Caribou in the Cabot Strait. John’s body was never recovered. His wife was rescued after many hours in the frigid water.

He didn’t come home with the boys today

That son who was so dear,

But his father stood as the train came in

And helped to raise a cheer…

Newfoundland newspapers frequently published Ena’s poems, and she became so well known that a new volume, Mayflowers and Roses, was published in 1946, to wide acclaim. She always had a great love of and respect for the British monarchy and especially Queen Elizabeth. When the then Princess and her husband, Prince Phillip, visited Newfoundland in 1951, a six-verse poem Ena had written to honour them was officially presented to them. Then when they returned to Newfoundland in 1959, Ena was thrilled to be presented to the now Queen Elizabeth. Also at that time a collection of her poems, in booklet form, was published as a token of loyalty to the throne of Britain and as a souvenir of the Royal visit.

Even long after her death, many remembered her work. In 2002, her wonderful poem “Newfoundland” was recorded by Buddy Wasisname and the Other Fellers for their Up Boot album.

Although Ena had never been able to know her brother, Jack, she had followed his illustrious career in Britain. Jack Drummond became a biochemist and was knighted in 1944 for his revolutionary work in the field of food science. In August 1952, Jack, his wife and their 10-year-old daughter were on a camping holiday in France when they were brutally murdered. It was a crime that shook Europe and was never satisfactorily solved. How Ena must have felt, knowing that any chance of seeing him again was now lost.

In July 1955, Ena’s husband, John, passed away. They had only 35 years together, but they had been happy ones in Curling, a place they both loved. John also had a wonderful gift for writing, and was a publisher and journalist of the Western Star newspaper.

It soon was apparent that Ena could not continue to live there on her own, and for most of the rest of her life she lived with her daughter, Rose, and family. In 1967, Ena was admitted to hospital in Grand Falls, where she died on January 21. She is buried in the United Church cemetery in Curling beside the man she loved. Today her daughter, Rose, and husband live in Mount Pearl. Her son, David, and his wife reside in Welland, Ontario. Her son, Arthur, passed away in St. John’s in May 2019.

Ena’s legacy is one of love for family and country, and through her gift of words she brought images, ideas and emotions to all who enjoyed her poetry.