A Party for St. Patrick 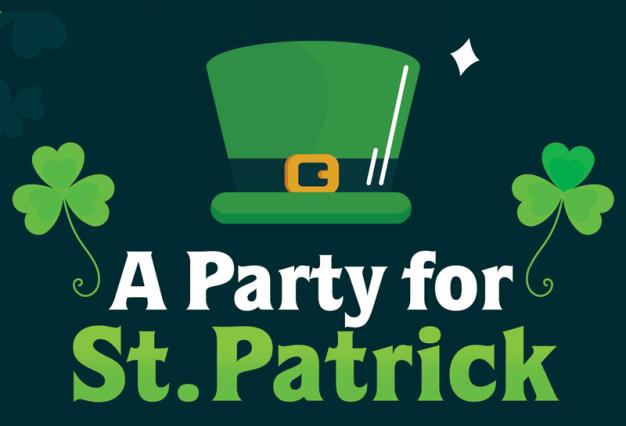 Even if you must stay home this Paddy’s Day, you can still get your green on and celebrate Irish culture.

When I was young, way back in the late 1980s, my folks threw a couple of St. Patrick’s Day parties that rivaled Christmas for the amount of preparation and decorating that went into them. My brother and I helped string paper shamrocks from the ceiling and stick posters of rainbows, horseshoes and pots of gold on every wall. We’d sort through the tapes to find The Dubliners and The Wolfe Tones while stew bubbled on the stove and bowls and ice buckets and pint glasses were readied.

Throughout the preparations I would pepper my parents with questions: “Who was St. Patrick? Why are horseshoes lucky? Who are the rebels? What happens when you catch a leprechaun?” By the time my parents’ friends and colleagues squeezed into our basement rec room I’d have ultimately learned a lot.

This year, the ritual of crowding into a house party or packed pub is pretty out of the question. Luckily, there are lots ways to celebrate at home on this day when everyone’s a little bit Irish!

The shamrock, with its bright green colour and three friendly leaves is the most recognizable and best loved patriotic symbol of Ireland. Legend has it that the shamrock was considered sacred by the pagan Druids of ancient times because three was a magical number. Legend also says that St. Patrick, patron saint of Ireland, used the three leaves of the shamrock to represent the Holy Trinity when explaining Christianity to the pagans. He is often depicted holding a cross in one hand and a shamrock in the other. A quick trip to the dollar store will get you all kinds of shamrock-themed decorations to deck your halls, or you can craft your own!

It’s because of St. Patrick and his shamrock that it became customary to wear green to celebrate St. Patrick’s Day. For a long time, though, azure blue was thought of as the colour of Ireland. In 1541, after more than 300 years of English bullying, Henry VIII decided to really knuckle down and declared himself King of Ireland. Ireland was given its own coat of arms: a golden harp on a blue background, and blue then had the misfortune of being associated with unpopular English authority. In the late 18th century, as the English began to seize Irish land and make laws against the use of the Irish language and the practice of Catholicism, nationalists adopted the colour green. Patriots starting sporting green ribbons, handkerchiefs and shamrocks; green became the colour of patriotism and rebellion. British authorities, keen to stamp out displays of Irish independence, actually banned people from wearing green. Punishments were harsh, and the guilty were subject to imprisonment, transportation, or the bayonet!

A stripe of green is also featured in the tricolour flag of Ireland. Green represents the Catholic population, orange the Protestants, and the middle stripe of white represents a wish for harmony and unity between the two. Political history aside, green is also the colour of spring, the shamrock and the beautiful, verdant fields of the “Emerald Isle.” So hoist up the flag, show off your best green duds, and enjoy the “Wearin’ of the Green”!

Also rare and hard to find are leprechauns, those tricky shoemakers of the fairy world, and any true believer will tell you that catching a leprechaun will bring you good fortune. They’re said to hide pots of gold just out of reach at the end of a rainbow and they’re able to grant wishes. The rule is, if you’re lucky enough to catch a leprechaun, you can never take your eyes off him or he’ll disappear.

Horseshoes are another popular good luck charm. One legend tells of St. Dunstan nailing a horseshoe to the devil’s foot. Displaying a horseshoe in the home or above a doorway is considered to be lucky for warding off evil. And, of course, it should be placed with the points up so the luck won’t run out.

Whether you believe in any of these old superstitions or not, there’s no doubt that there’s truth in the old saying that if you’re Irish, you're lucky enough!

Ireland has a literary tradition that can be dated back over a thousand years and has produced some of the greatest writers the world has ever seen. Try reading works by William Butler Yeats, Oscar Wilde, James Joyce, Seamus Heaney or Roddy Doyle to get you in the Irish spirit. Try your hand at writing a limerick. Limericks are short, rhyming, funny poems with a bouncy rhythm that makes them easy to memorize. No one knows for sure where the name comes from, but most people assume it’s related to the county of Limerick in the midwestern Ireland. Why not have a little contest with your family to see who can write the best, funniest one?

Play or Sing Along

Any celebration of Ireland needs music, and lots of it! All good Newfoundlanders and Labradorians should be familiar with the jigs and reels of traditional Irish music. You might already have a fiddle, tin whistle, mandolin or bodhrán at home. Fast-paced and fun, Irish drinking songs mostly bemoan or celebrate alcohol as the cause of and solution to all of life’s problems. Try your hand at playing a few tunes, or add “Whiskey in the Jar,” “Finnegan’s Wake” and “The Wild Rover” to your “Essential Irish Drinking Songs” playlist.

Irish traditional music also includes ballads and rebel songs that tell stories of Ireland’s difficult path through history. Sorrowful ballads often tell of hardship, famine and rebellion against tyranny. Of course, from 1798 onwards it was considered seditious to sing rebel or anti-British songs, but more recently bands like The Wolfe Tones have written hundreds of ballads about most aspects of Irish life. The Dubliners, The Dublin City Ramblers and the Clancy Brothers are also essential listening for any Irish patriot on St. Patrick’s Day.

And finally, what would St. Patrick’s Day be without drowning a few shamrocks? Have a glass of whiskey or a strong pint of Guinness, Ireland’s beloved, iconic beverage of choice. Guinness Stout has been crafted at the St. James’s Gate Brewery since 1759, when Arthur Guinness launched his enterprise. Three million pints are brewed daily at the original brewery and more than 10 million are sold every day worldwide! Guinness is good for you, so the advertisements say, so have a pint (or two).

So there you have it. While this year might be a little different, there are still lots of ways to show your pride and celebrate St. Patrick’s Day at home, and maybe even learn a little about the beautiful culture and long history of Ireland.