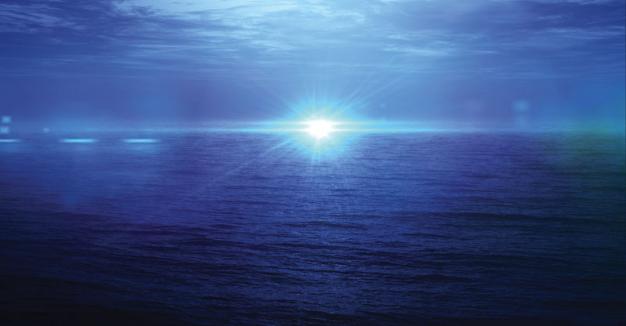 Can a mysterious light in the sky foretell a storm?

When I was young, just 10 years old in 1957, on a warm September night around 9 p.m. I climbed a hill called Ochre Pitt, a small hill just above our house in Hart’s Cove on Twillingate Island, Newfoundland. I used to do this often, just sitting or lying on my side watching the stars in their millions because it was peaceful. Also I could hear the night sounds of owls, bats and ground mice, and in the distance, barking dogs each with their own distinct bark. There were no streetlights, only dim kerosene lamplight shining through someone’s kitchen window.

On this particular night, as I was looking out over Twillingate Harbour and the ocean beyond, I noticed a dim light very far in the distance to the northwest of me, dancing over the water to and fro like a ballerina. It came closer and closer, moving very fast. It got brighter the closer it got, and sometimes I could see a blue light within it. The light danced and kept going to and fro until it got halfway in the harbour, then turned and with greater speed danced out of the harbour back to the northwest. In about 10 minutes it was out of sight.

It was late that night before I went to sleep, thinking about what I had seen. Never before did I ever see anything move as fast as this, not even the trains my mother and I took going to Toronto earlier that summer, and for sure it wasn’t a fisherman’s boat with the old make-and-break 4 HP engine. Never did I see a light get so bright, not even the one in the lighthouse on Long Point.

The next morning, I went down in the cove and walked out on the stage head where Mr. Hawkins was doing his fish. I asked him if I could cut out the cod tongues. “Aye you,” he said. I was bursting inside to tell him what I had seen last night, but didn’t want him to make fun of me for talking foolish. Then out of the blue I blurted it out, “Mr. Hawkins, I saw a light last night after dark come in the harbour, a bright light going very fast and dancing as it went.”

His answer came quick. “You saw the Bakers Light. It’s a weather light; we’re going to have a storm of wind for sure,” he said. “I noticed this morning my weather glass was bottom up.”He told me he had seen the light himself a few times. It comes from the shipwreck of the Queen of Swansea in the 1800s on Cape John Gull Island, across the bay about 30 miles from here. They all lost their lives; some survived the wreck, got ashore and lived for a while, but eventually died from the cold and hunger, as it was in the winter.“December, I believe it was,” he said.

There’s a story of the time two men from here ran out of tobacco. In their punt, they paddled across the harbor towards E.J. Linfield’s Shop, which was open until 9:30 on this Saturday night, to get some tobacco. It was dark and the water was as calm as oil. Halfway across the harbour they saw this light coming towards them. They paddled as fast as they could, but they couldn’t get rid of it, and suddenly it engulfed them.

“They told me,” Mr. Hawkins said, “that there was a hurricane of wind in the light. They lost their caps, their hair stood off straight, lighting was flashing and cracking, and their small boat seemed to be spinning around. Suddenly it was moving back out the harbour. All was calm but they couldn’t see anything, including where to go. After 10 or 15 minutes they got their sight back and headed back in the cove. I was there when they came in and helped haul up their boat. They were shaking like a leaf on a tree. George never did find his cap and Bobby’s hair turned white as the driven snow.”

I saw the Bakers Light once again after that, my buddy and I. The next day we had a nor’easter, a gale of wind and torrential rain. These stories I heard when I was young will stay with me always.