A Horse with Heart and History 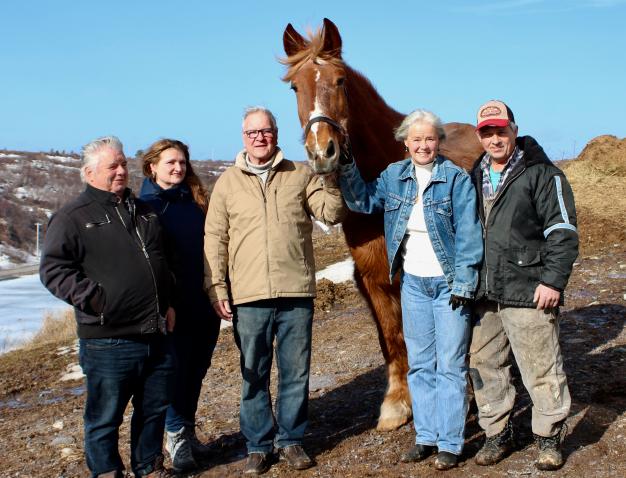 The Life of Ranger

If ever there was a horse that could bring people together, it was Ranger - a handsome gelding named after the Ocean Ranger, the drilling rig that went down in a winter storm off Newfoundland in 1982, killing all 84 people on board. The Belgian-Standardbred cross is a remarkable horse for a number of reasons, most notably for nearing the ripe old age of 36, maybe even 37 years old (approximately 105 in human years). Last spring, all his owners past and present gathered on the Avalon Peninsula of Newfoundland, where he’d lived with us at different times, to commemorate this beloved equine’s wonderful life. We took turns telling our stories of Ranger - and there were some interesting stories told!

His first owner was Aloysius “Wish” Dolton, a former iron worker from Conception Harbour, who purchased Ranger from Bill Young, a Spaniard’s Bay breeder. Apparently, Bill had a registered Belgian stallion and a Standardbred mare from the Goulds racetrack, which were not supposed to be bred, but “accidents” happen. Their offspring, Ranger, was naturally strong and fast. He had a huge chest and hairy feet like a Belgian, but his back was lean with the sculpted body and rear end of a harness race horse.

Wish explained that Ranger had a hard-to-break feisty nature, which probably saved Wish’s life one night. Galloping home late and in a hurry from a popular bar where Ranger had been Wish’s transportation, horse and rider almost T-boned a car. Ranger leapt over the hood of the vehicle just in time to save them both from catastrophe. However, momentum landed them both in the ocean. Wish sustained a broken leg and Ranger required emergency veterinary care. They both survived; however, a lifestyle change meant a divorce for Wish and a new home for Ranger.

Ranger’s new owner was a construction worker with local #855 Teamsters named Jackie McGrath of Avondale. She saw Ranger as a powerful wood hauler, and she said he did not disappoint. He “never seemed to tire,” she said, and she was amazed that he learned and always knew exactly where to stop to facilitate the easiest offloading of the wood. Unfortunately, demands of working away from her farm left Jackie with no choice but to sell Ranger. That’s when Ranger met Don Whalen.

Don, a former sea captain primarily with Newfoundland and Labrador ferries, had a hobby farm with a small number of cattle and sheep. Ranger was used more for pleasure riding than anything. One time Don and Ranger were wading across Angle Pond, south of Mahers, when suddenly something wasn’t right. He and the horse were floating separately. Don realized the girth (or cinch) had completely loosened underneath and now he was swimming on his own with no horse. After rescuing his saddle, Don made his way safely to shore to discover Ranger patiently waiting for him. If anyone knows horses, they don’t usually stick around. Unlike in the movies, a loose horse will hightail it to the greenest patch of tall grass.

When shift work and animal care turned out to be difficult for Don, I entered the picture. I’d learned how to ride while working in Calgary, AB, as a dentist in the 1990s. Owning a ranch there was too costly, but after I relocated to St. John’s, NL, operating a small ranch on Roach’s Line not far from the city became a dream come true.

My story about Ranger involved the St. John’s Santa Claus Parade. I decided to recreate the popular TV show “Mantracker” for my dentistry entry. I would ride Ranger and track two oversized Styrofoam teeth permeating in and around the crowds: “Cavity Tracker”!

Almost invariably, horses don’t like parades. The sirens, the crowds, the multitudes of kids wanting to pet them are all generally harrowing for horses. Not Ranger. He was what horse types call “bombproof.” The following year, I entered the same parade with an alternate horse and it was a nightmare! The new horse was unruly. I sustained a fractured skull and a broken tail bone.

My time with Ranger included the winter of the most snowfall in Eastern Newfoundland’s recorded history, 2001. Horses are grazing animals and must feed a minimum of every 12 hours, regardless of weather conditions. One day, as I turned the corner of the last intersection before my house, Ranger was standing in the middle of the road. There was so much snow he had walked over the fence and was standing there staring down at me in the car.

It only seemed natural to me that the next owner of this great creature should be Bill Dawe of Port de Grave. Bill, a former snow plow operator, was the local farrier who’d worked on the hooves of many horses in the province, including Ranger.

Ranger had more of a glamorous life with Bill, who often harnessed him to fancy carriages to carry the bride and groom after marriage ceremonies. On one occasion, however, the receiving line had gone on too long, culminating with a large crowd of guests herding the front of the carriage and camera flashes firing continuously. Forced to retreat, Ranger backed into a guard rail where he brought up solid. Overcome, he bolted through the busy parking lot with Bill barely able to control the reins. The groom hung on for dear life, although the bride later declared that she wasn’t a bit worried, as she knew Bill could handle it. Bill still wonders how the entire crowd survived unscathed.

Up until last year, it was not unusual to see Ranger harnessed to a sleigh on any given winter Sunday, steadfastly hauling passengers up and down Ship Cove Pond near Hibb’s Cove. In the summer, you could catch Ranger grazing with his barn mates on the hilly fields around Port de Grave.

But lately, Ranger was showing signs of age. When we gathered last spring, we all noticed how he was more hollow through the hips, his ribs beginning to show. However, his teeth were still good, which is the biggest indicator for a horse’s longevity. “Ah, he has a few good years left in him yet,” we all agreed.

Eight days later, when Bill let Ranger outside to clean his stall, he went down and could not get up. The vet was called and Ranger was helped to greener pastures.

We marvel now at how fatefully we had gathered to admire an incredible animal with such a huge heart and great disposition. We are so grateful to have shared the memories and raised a glass to a great horse named Ranger.