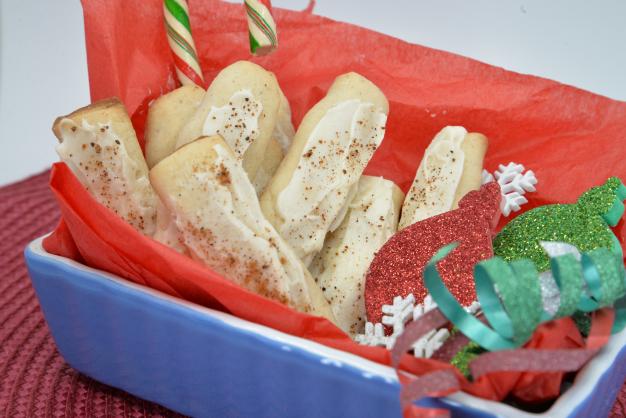 Recently we asked Downhome readers to tell us about the foods they look forward to every holiday season and share the recipe. Everyone who responded with a recipe and story were entered into a draw for a special stocking stuffed with Newfoundland and Labrador goodies. Congratulations to the winner, Shane McKay of Mississauga, ON. Here is his delicious winning entry:
“This recipe has been passed down through at least a couple of generations, given to me by my aunt. For many years we would spend Christmas at her place with our children ,and these nutmeg logs were always everyone’s favourite.  I’d say it’s at least 20 years now since she shared the recipe with me, and I have made them every Christmas since.”
2 2/3 cups flour
1 tsp nutmeg
1/4 tsp salt
1 cup soft butter
3/4 cup sugar
1 egg
2 tsp vanilla
Frosting:
2 tbsp soft butter
1 cup icing sugar
rum
nutmeg for sprinkling
Stir together flour, nutmeg and salt. In larger bowl, cream butter, then gradually add sugar. Cream well until fluffy. Beat in egg and vanilla. Stir in flour mixture gradually and knead well into a dough. On lightly floured surface, shape dough with hands by rolling pieces of dough in long ropes 1/2-inch in diameter. Cut ropes into pieces about 1 1/2 inches long. Place 1inch apart on ungreased cookie sheet and bake at 350°F for 12-15 minutes, until light brown on bottom. Do not overbake! Cool well and spread with frosting.
Frosting: Cream 2 tbsp butter. Beat in icing sugar and add a capful of rum for creamy spreading. Spread frosting on cooled logs and then sprinkle with nutmeg. Note: When making the icing, you can add a little more rum to thin it out if it’s too think. And if you accidentally (or on purpose) put in too much rum, you can add more icing sugar to thicken it up.
MORE ARTICLES
load more