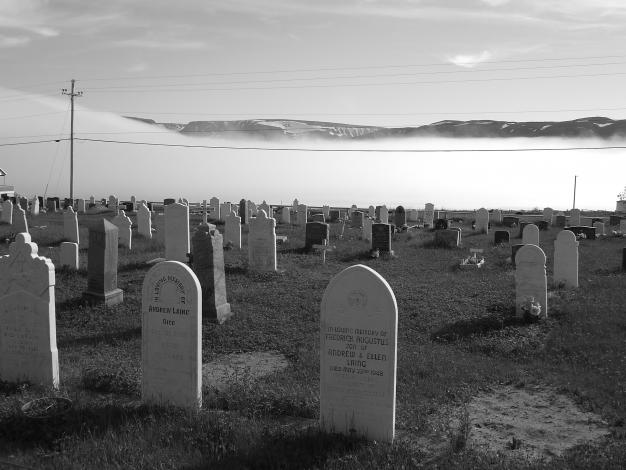 Moving along the beaches in Colliers, NL, surveying the aftermath of the monstrous January 17, 2020 winter storm, I spot remnants of old wharves and fences, and even debris from a derelict dory that was long submerged far away but returned as detritus of the depths upon the sea strand. My father, Tony Flynn of Colliers, hearing what unusual items had been tossed up with the waves, said, “The ocean is a strange and marvelous place like that. Old men around home were fond of saying, ‘What the sea takes away, it always gives back, but often not in the way you expect.’”

He continues, “There used to be lots of stories about folks who died at sea, for instance, returning to the land as spirits to let loved ones know they had passed. There was even a very old song around Colliers that I learnt from my mother, who learnt it from her mother, meaning it went back a long ways.” Called “Your Daddy’s Ship” or “Many a Tall and Gallant Ship,” it had 34 or 35 verses, Dad estimates, and told of a sailor’s death token coming to his son in a dream.

“I don’t remember it all, but one verse where the child is describing the token visit to his mother and her response went, ‘Oh, I dreamed last night I saw my dad holding his hat in hand. And these words he spoke, “God Bless you both,” as he sailed from Newfoundland. Now your daddy’s ship, my gentle boy, it is sunk beneath the waves, and it’s many a tall and gallant ship sails over your daddy’s grave.’”

I’ve collected a number of stories like these over the years. Joseph Conway, a native of Colliers who resides in Ontario, wrote to me in 2013 about what was believed to be a spectral warning from a departed family member that possibly saved a life. “This happened to my grandmother over 50 years ago, and she always maintained it was a true account of what occurred… When I was growing up, I remember that she was noted for taking being truthful very seriously, so as kids we believed that Nanny never lied. I can only relate what she said, since I never witnessed it personally, but she often told me of a particularly sudden strong thunder and lightning storm that came up in over the harbour in Colliers. When the winds and rain came heavy, she discovered that the front door was ajar and the metal screen on the old-fashioned storm door was wide open.”

His grandmother rushed towards the door to close it, but was stopped in her tracks by something very strange. “As she walked over to close the door and screen, she almost had reached out to touch it when suddenly a young boy, dripping wet, came walking up the steps and raised his hand to halt her. He didn’t speak but was shaking his head in a clear warning of a single word. That word was ‘NO!’ Grandmother instantly recognized this young boy as her first grandson, Gary, who was drowned at the age of seven beneath a wharf in nearby Conception Harbour some years before. Shocked at the apparition she hesitated, frozen in fear, and that simple gesture probably changed her life forever. Before she knew what happened, a bolt of lightning suddenly hit the screen door! It flashed and sparked and danced all around the entrance. Grandmother said that if it weren’t for that moment’s hesitation, she would have had her hands on the metal and never would have lived to tell the tale. As for that little boy, she never saw him after. Apparently, he just gave a sad little smile and turned to walk away into the darkness.”

Other spirits were not issuing any warnings but, perhaps, merely passing through and visiting familiar haunts one last time. Robert Keating of Conception Harbour, age 84 at the time, shared this WWII-era tale with me in February 2019.

“Now I’m not sure how much there really is to it, but back in those times some people believed in a thing called a token (or a death token), which supposedly was a sort of a ghostly copy of a person travelling great distances to visit a loved one or a special location around the moment or shortly after when the actual person passed away. It was seen as a premonition that news would come shortly of an untimely death. I can’t say if that was actually the case or not, but I often heard my mother tell the story that one time during the Second World War she and my father  were walking out from her parents’ house in on Healy’s Pond Road, in an area of Conception Harbour known as The Pinch. When they got to a low rise called Curran’s Hill [near the present day ballfield], they met a sailor walking in the road. They spoke to him and he didn’t answer, which was pretty strange in those times since everyone was very friendly in a small place like that. My mother said to my father later that night, when they were discussing the odd incident, that she thought for sure it was Bill Costello, who was very well-known to her since his home was just across the road from where they lived. The next day they asked around and nobody else had seen or knew anything about a sailor walking in around The Pinch that night, so they kind of forgot about it. Of course, a few days later shocking word came that made them remember the encounter. It turns out the ship that Bill Costello had been serving on was torpedoed somewhere overseas and he was lost at sea.” The general consensus was that it was his token the young couple saw taking one last visit to The Pinch before heading on his Final Voyage to wherever sailors gone down at sea find their ultimate rest.

Robert has another similar story about a construction worker who died sometime in the 1940s in New York. “Well there’s another one that Lil Wade, who lived down the harbour in Conception Harbour, often told me. The district nurse was boarding with Lil, and she was doing Lil’s hair this day when a knock came on the door. They went out to answer and there was nobody there, but there was a man jumping over the fence up by the barn. It looked just like Lil’s husband, Mike. Now as it happened, Mike was working away in New York. The next day Lil got a message, I guess a telegram in those days, that Mike had been killed on the job in New York.”

John Dawson of Kippens, on Newfoundland’s west coast, shares a most unusual premonition tale that has a familial connection for him, but was also famously included in Cassie Brown’s book of the 1914 sealing disaster, Death on the Ice. I spoke with him about it over the phone in 2015.

“I was born and raised in Bay Roberts in Conception Bay North and my father was John M. Dawson as well, but most people would have known him as Jack Dawson or Farmer Jack,” he began. “One of the stores Father told quite often was about his cousin, Thomas Dawson, who had served as one of the Masters of the Watch on the ship the SS Newfoundland during the great sealing disaster of 1914, where 78 men perished.” His father heard this story firsthand from Thomas himself.

While stranded on the ice floe, Thomas would encourage his crewmates to keep moving by beating a path through the snow and ice for others to follow. He did this for hours on end in a blinding snowstorm. “This would have been very difficult work, as the person out front gets the full blast of the weather and expends a lot of effort. He’d also fallen through the ice into the water a number of times, so his feet and legs were soaked and eventually froze. Over time it all took a heavy toll, and he had to lay down on the ice to take a rest.” Fearing that he might die there of exposure, his crewmates stacked dead bodies around him, to help shield him from the weather.

“Whatever the reason, Tom hung on and always maintained that in a dream he was visited out there on the ice by the vision of a young girl. He recognized her as the daughter of his good friend, Abram Parsons of Bay Roberts, and she pleaded with Tom to hang on as her father was on his way on the vessel Bellaventure to save him.”

Robert continued, “While Tom suffered frostbite and would eventually have his legs amputated, he lived on to be rescued. In a strange coincidence, or perhaps in a striking conclusion, it was indeed by the vessel Bellaventure, and it was actually carrying his good friend Abram Parsons, who was one of the ship’s officers. It was exactly as the girl who came to him in a dream claimed would happen.”

Do you have any stories of ghostly apparitions or visits from death tokens? Share your story at Downhomelife.com/submit; or email it to editorial@downhomelife.com; or write to Downhome, 43 James Lane, St. John’s, NL, A1E 3H3.