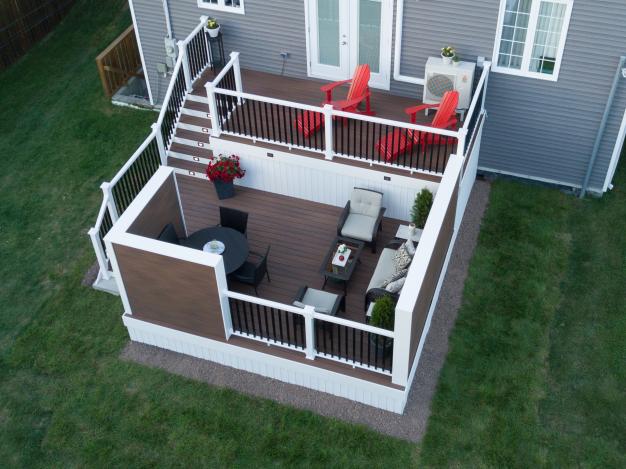 The planning and precision paid off on this patio project

Story and photos by Tobias Romaniuk

“I wanted everything to be perfect from the ground up,” says Garrett Murphy, owner of Perlicade Construction. We’re standing in a Mount Pearl backyard, looking at the latest Perlicade deck project as Garrett explains the build process for this multi-level patio. The house attached to this deck sits in a cul de sac subdivision built about 20 years ago, says the homeowner, and the wooden structure was beginning to show signs of rot. It was time for something new.

Garrett’s interest in carpentry goes back to his childhood and time spent with his pop, who showed him how to use a handsaw and other woodworking tools. When it came time to study for a career, though, Garrett chose naval architecture, not carpentry. Then the work dried up and Garrett returned to school, this time to study carpentry. He spent a few years getting hands-on experience in the building trades before starting Perlicade in May 2018. The company is currently focused on outdoor living products - fences, decks, sheds and the like - with plans to expand into other areas down the road.

Although boat decks and house decks don’t, on the face of it, seem to have that much in common, Garrett has found his previous career training and experience useful, especially when it comes time to sit at the computer and design a client’s project in AutoCAD, the industry standard software for drawing construction plans.

Describing himself as being particular, Garrett takes obvious pride in his craft, pointing out seamless mitre joints that give the deck a refined look. Although he does it for himself - a job well done is one to be proud of - he also realizes that quality craftsmanship will lead to referrals as he works to build his company brand.

“I’m just trying to do good work for all the clients I have now and working on my name,” he says. 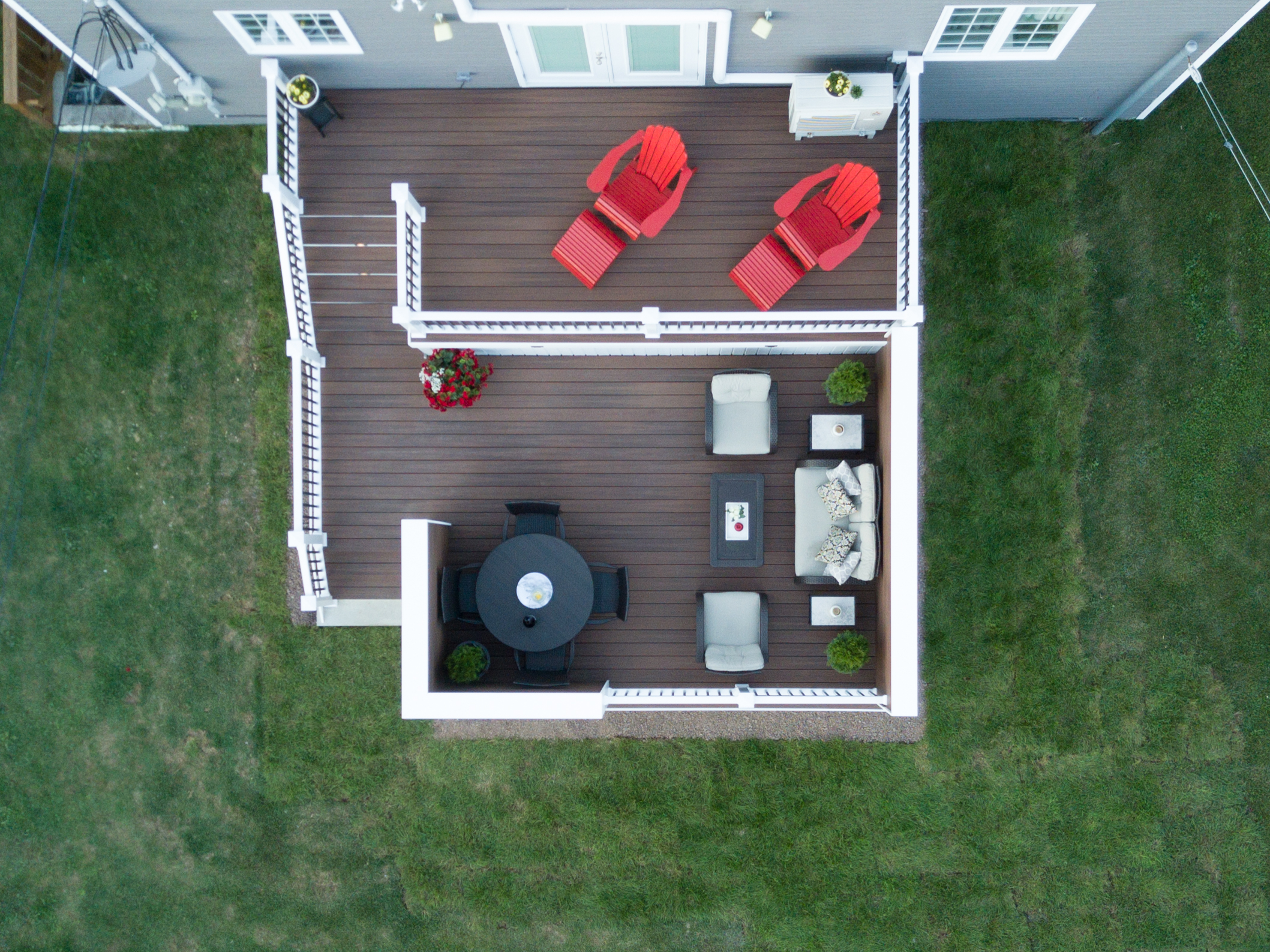 The two-level Mount Pearl deck is built with composite materials, which require virtually no maintenance and, for this particular brand, come with a 25-year residential guarantee. The deck boards are manmade using plastics, wood particles (but it’s not particle board) and other materials to engineer a resilient surface with a wood look, complete with a grain pattern. Composite boards, says Garrett, won’t crack, splinter or decay like their solid wood counterparts. The upfront cost is higher than a pressure treated deck, but if one needs to justify the expense, consider the savings of never having to buy another can of stain.

Using premium materials, and the promise of a long-lasting deck, is all for naught if the foundation isn’t properly prepared, though. To prevent movement from frost heaving or ground settlement, Garrett placed the deck on concrete pilings poured into four-feet-deep holes to reach below the frost line. Before digging any holes, Garrett laid out a string grid to plot the locations of deck posts and to ensure everything would be perfectly square. To help with the groundwork and landscaping, he brought in fellow tradesperson Adam Whitten of ArcForce Industries Inc.

In an effort to ensure the pressure-treated wood substructure would last as long as the composite deck boards, Garrett taped every joist with a waterproofing membrane that prevents water from pooling on the joist and seeping into screw holes. Water getting into the wood, explains Garrett, is what leads to rot.

The new patio’s deck boards are unmarred by screw holes. To achieve this look, Garrett used boards with grooved sides to accept clips that attach to the underlying joists. It’s a system as secure as screws or nails, but doesn’t react well to excessive deck movement, which is why the deck sits on pilings rather than deck blocks.

Before any work was done outside, Garrett met with the homeowners several times to learn how the family uses the deck, what they did and didn’t like about the current deck, and the look they wanted for their new outdoor space. Those conversations informed his design, build and material decisions, including an agreement to build the deck smaller than the previous incarnation, a somewhat large 24 by 36 feet. The new structure measures 20 by 20 feet, with an eight-foot top section and 16-foot lower section, both 20 feet wide. 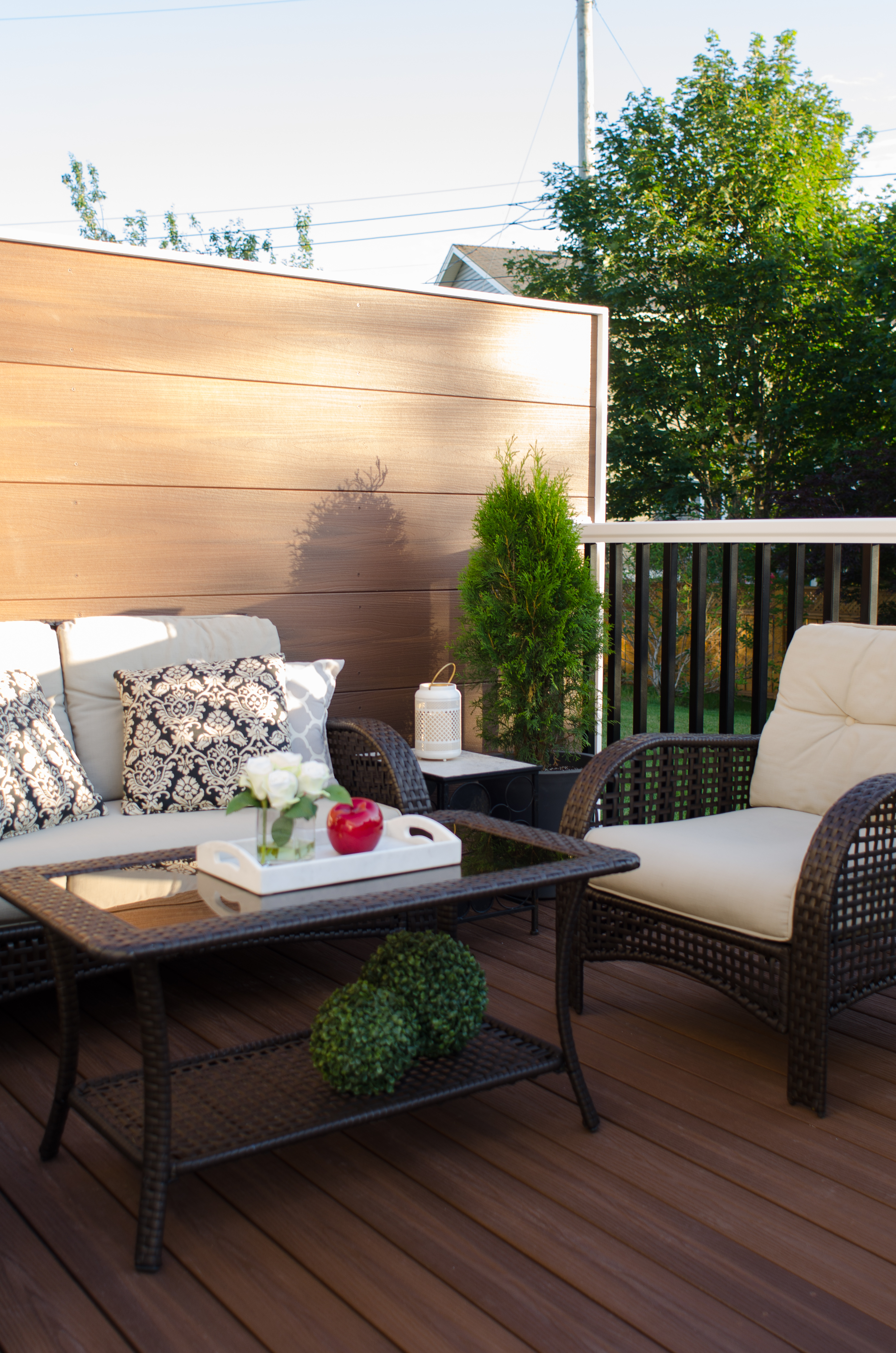 This carefully crafted build - the corners are mitred, the screw holes are plugged, the fasteners are invisible, and the lights are built into the stair risers and wall - is a reflection of Garrett’s focus on construction best practices and doing a job the right way. With every job, he is pushing to raise what people view as an acceptable standard of work.

“Why can’t we be better than good enough?” he asks, as he stands in front of the patio that is a testament to his refusal to settle for less than excellent.