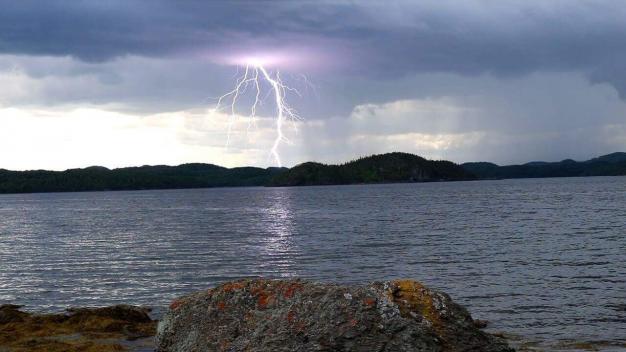 In early June 1932, Carl F. Hammerstrom left Portland, Maine, on the George B. Cluett with Captain Iversen, as Master. He was bound for St. Anthony to spend a year working for the Grenfell Mission. Later, he recounted one of his most memorable experiences in the pages of the Among the Deep Sea Fishers magazine.

Hammerstrom had been on board the Prospero when it docked in the Great Northern Peninsula community of Englee. As a visiting medical professional, he was escorted to a gloomy little shack where he found two young men on an uncovered mattress with a dirty cotton blanket. Both of them were dressed only in “well-begrimed long John’s” and were sick with typhoid. Hammerstrom commandeered a trap boat to convey the men back to the hospital in St. Anthony. They were loaded into the boat and covered with a tarp as they set off after sunset.

As they motored out of Englee, the full moon was covered over by clouds and the wind started to roar. The boat was tossed amongst dark waves in the inky darkness as it started to rain. Somewhere between Englee and Groais Island, the situation became even more dangerous.

“Then occurred a phenomenon which I had read about but never seen,” writes Hammerstrom, “and this was ball lightning. An enormous ball of bright fire skipping along the horizon like a stone skipped across some pond by a little boy. Impressive, breathtaking, voice-stealing, frightening - a harbinger, perhaps, of our demise. By this time no one was very happy.”

“Floating or ball lightning is true lightning,” reported a St. John’s newspaper, the Daily News, in 1958. “Balls of fire, the size of balloons, fall slowly from the clouds until they strike the earth and explode. Sometimes they roll along the ground and do not explode until they hit some object.”

Some 19th-century reports describe balls of lightning that eventually exploded and left behind a persistent, sickening sulphur smell. While not fully understood by science, ball lightning is, luckily for us, very rare.

Hammerstrom and the boat made it safely to St. Anthony, though one of the young men perished of his illness in the midst of the lightning storm. The survivors were never able to forget the sight of the tempest’s electric fury.

In the days of wooden ships and timber houses, lightning was a force to be reckoned with. It could (and did) cause terrible damage and fires, and some farmers even blamed lightning strikes for causing potato rot.

Almost instantaneously, fire burst from all parts of the sacred edifice, amidst peals of thunder and lightning flashes that illuminated the darkness. Father Sheehan rushed into the burning church and made several attempts to save the vestments and sacred articles, with partial success. Pieces of the tower were driven several yards from the site of the building as if blown there by dynamite.

Meanwhile, lightning entered the house of Edward Cook and broke through the chimney. Four people in the house were rendered unconscious. Mrs. Cook had been sitting in the kitchen reading a book, her feet resting on the fender of the stove. The lightning drove the boots clean off her feet and then shot through the kitchen floor, tearing a wide hole in the floorboards. Mrs. Cook swooned from the pain and fright, and her feet were badly burned. Two miles away, in Harbour Main, the house of Peter Walsh was broken to pieces by the storm.

Dramatic and destructive as that particular incident was, it could be worse. Newfoundland and Labrador falls in 10th place across the country for days with lightning, ahead of only Nunavut, the Northwest Territories and the Yukon.

An Environment Canada study between 1999 and 2018 reveals that the unluckiest place to be in the province (lightning-wise, anyway) might be Grand Falls-Windsor, which registered 3,314 lightning strikes between those years. It was certainly something the Anglo-Newfoundland Development Company took into consideration in 1924 when they hired the Alphons Custodis Chimney Construction Company of New York City to build what was at that point the tallest chimney on the island. The mill’s radial brick “smokestack” rose 300 feet from the ground and was topped with eight pointed platinum lightning rods, with two copper cable down leads, to deal with lightning strikes.

Compare Grand Falls-Windsor with the Northeast Avalon region, which sees the least amount of lightning days per year, averaging 40-50 strikes per year. The safest place to be on the Avalon? That would be Mount Pearl, which only had 688 strikes in the same 20-year period that Grand Falls-Windsor had over 3,000.

Eastern Newfoundland does get its share of weird lightning. In March 2009, several witnesses in different communities reported a similar, but varied event. A man working at St. Clare’s Hospital saw a bright white flash that lit up the skyline above St John’s, while a Pouch Cove woman saw a blue flash. Two bright flashes of white and purple were reported by a woman in Bonavista, while an eyewitness in Paradise saw the sky turn orange, an effect that lasted for at least a couple of seconds before it faded out. Another person claimed the sky changed from white to blue to pinkish-purple, and that the light seemed to last for ages. A woman saw something light up the sky as she was driving through Lethbridge, while a woman driving near Clarenville saw a flash that she described as “like a bomb without the boom.”

Local radio stations reported that officials were baffled. Social media discussion ranged from the serious to the outlandish, putting the blame variously on the Russian Mafia, meteors or asteroids, space debris, missile launches, aliens and too many baked beans. The probable cause was cloud-to-cloud lightning.

Don’t take chances. If you hear the heavens grumbling, follow Environment Canada’s recommendations and get to a safe location, either in a building with plumbing and wiring or an all metal vehicle. Stay there for half an hour following the last rumble of thunder and hopefully, unlike Mrs. Cook, your boots will stay on your feet where they belong.