A love of beachcombing turned into works of art.

Most Newfoundlanders and Labradorians delight in a calm, sunny forecast, but not Lauren Ash. High winds on the horizon? A storm surge, perhaps? Those are the conditions Lauren loves to see because that’s the weather, she’s found, that makes beaches around the province ripe for the combing.

“I’ve always loved going to the beach. Beachcombing makes me happy, helps clear my head,” she says. “At first I didn’t realize the potential for making beautiful art and jewelry out of [sea glass], but eventually our jars started to overflow, and I said, ‘Ok, let’s do something with it.’”

A kindergarten teacher by day, Lauren launched her business, She Sells Sea Glass NL, about two years ago. And it’s been keeping her busy ever since; Lauren estimates she’s sold up to 1,000 framed pieces of artwork (her most popular product) alone. While she personally prefers creating pieces with a Newfoundland and Labrador theme (think row houses, whales and laundry lines), she’s fulfilled custom orders depicting everything from trains and cars to parrots and sneakers.
To bring all those designs to life, Lauren and her husband, Adam, and their dog hit the province’s shorelines year-round in search of nature-made supplies.

“As long as you can get down to the beach, we’ll go,” she says. It’s usually a bit of a jaunt, since Lauren (who lives in St. John’s) says she hasn’t had much luck finding sea glass on the Avalon Peninsula. During low tide, they’ve scoured beaches in and around the Clarenville area, as well as along the island’s south and west coasts, with great success. Oftentimes, though, they hit the jackpot in the most unexpected places.

“We’ll just be travelling along the highway and I’ll say, ‘Oh, pull over here!’ And it’ll just be a little spot there with some fishing stages. It’s not exactly a beach, but it’s by the water, and we’ll end up finding [sea glass] there,” says Lauren.

Surprising, too, are some of the items she’s found while searching for sea glass. Sea pottery (shards from old dishes and vases) often makes for a pretty, patterned blanket hung on a clothesline in one of her works of art. One obscure item for which she hasn’t yet found an artistic home is a tiny seal figurine, which, after some research, Lauren found to be part of the Red Rose Tea collection (a line of ceramic miniatures the company launched in the 1960s). Some of her most prized finds are rare pieces of sea glass, however.

“When we pick up a purple piece, me and my husband might be at different ends of the beach, but you can hear us!” says Lauren, adding that other uncommon colours they’ve found include red (perfect for depicting cheerful puffin beaks), orange and yellow.

Arriving home with her loot, Lauren rinses the sea glass, lays it out to dry and then sorts it by colour and shape into various jars and containers. Forming it into artwork is typically how she winds down after a long day. Sometimes she has a theme in mind when she sits down to create. Other times, the glass itself inspires her work.

“Sometimes I literally pick up a piece and I think it looks like something. You know when you look at the clouds and see shapes in them? It’s kind of like that with sea glass for me,” she says. 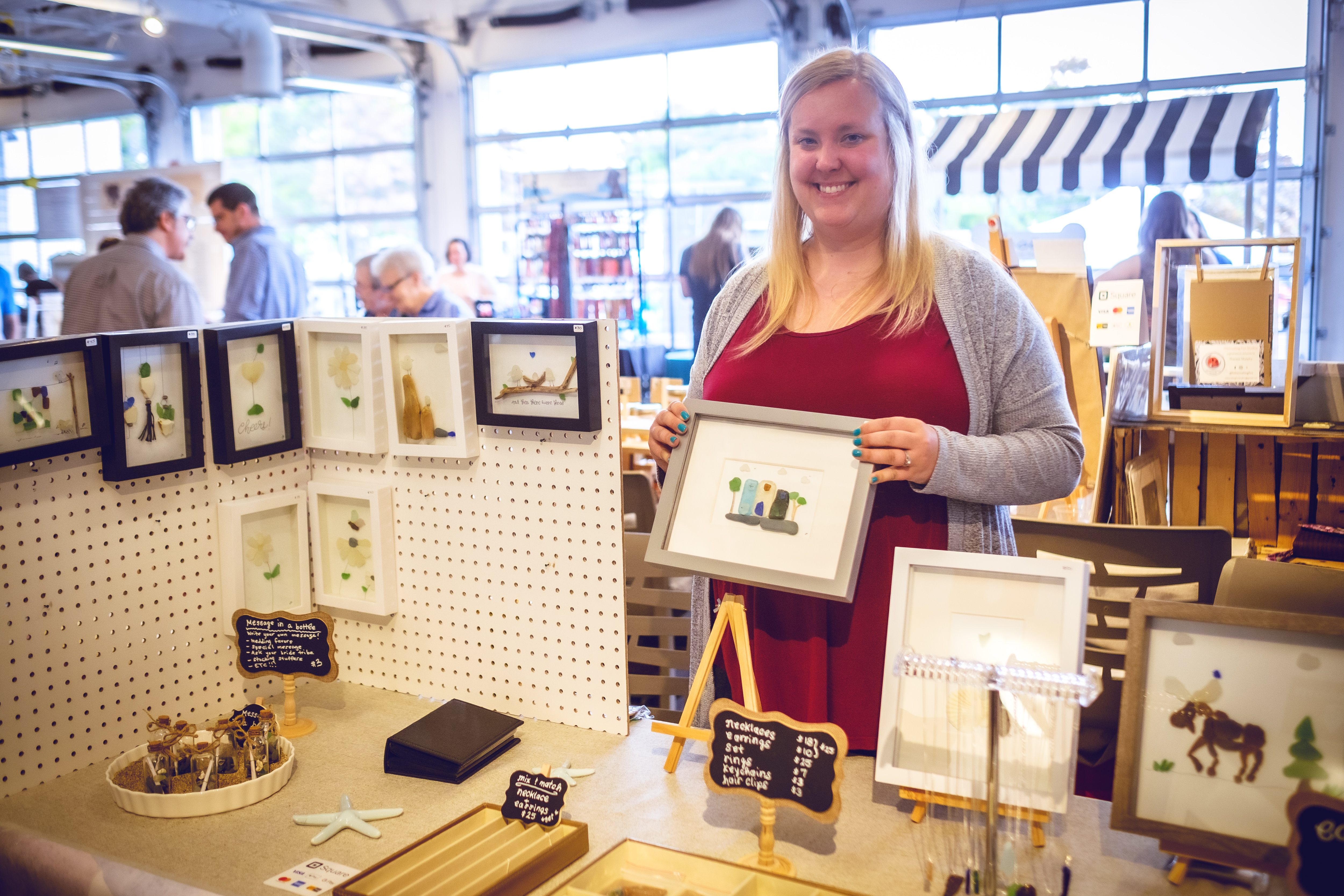 With Snowmageddon eating up much of January and the COVID-19 pandemic striking in March, 2020 has been a tough year on many small business owners, Lauren included. However, she managed to keep She Sells Sea Glass NL afloat through online sales and free local delivery.
“Luckily, people are getting on the bandwagon of supporting local small business,” says Lauren, happily adding that she actually filled more Mother’s Day orders this year than last. Speaking with her in late June, she was happy to be getting back to her regular spot at the St. John’s Farmers’ Market after months away. (Her work can also be found at the Dock Marina in Trinity.)

While some of her pieces adorn the walls of her own home, most of Lauren’s work sells before she has the chance to become too attached to it. There are some pieces of that beautifully frosted, ocean-formed sea glass, however, that are priceless.

“My husband and I went on a delayed honeymoon last year to France. When we were in Nice, we collected some sea glass there,” says Lauren. “I’m planning on making something out of that to hold onto.”

Find She Sells Sea Glass NL on Facebook and on Instagram to see more of Lauren’s work.