With a throaty rumble, the engine springs to life. The beautifully restored 1958 Land Rover shakes off inertia and rolls out of the garage into the sunlight on a stellar July 2020 day in Cupids, Newfoundland and Labrador. Cruising past the landmark 1875 Cupids United Church, a gigantic 7x14-metre Union Jack Flag flaps overhead against an azure sky. A number of immaculately shined antique automobiles line the waterfront to watch the rugged little vehicle roll on by in something akin to an honour guard. Everyone there realizes this is an occasion for the history books.

Classic Land Rovers hold high prestige among adventure travellers and off-road enthusiasts the world over. Founder Maurice Wilks supposedly drew a sketch of his vision of a vehicle “that could tackle any terrain, weather condition or challenge” in the beach sand in Anglesey, UK. His Land Rover made its debut on April 30, 1948, at the Motor Show in Amsterdam, the Netherlands, and been synonymous with exploration ever since.

Closer to home there is a surprising Land Rover connection: it was the first vehicle to complete the new 903-kilometre TransCanada Highway from Port aux Basques to St. John’s, Newfoundland, and the province’s first premier, Joseph R. Smallwood, was behind the wheel.

According to TransCanadaHighway.com, “The paving of the TransCanada across Newfoundland was completed on November 27, 1965, with the official opening ceremony at Pearson’s Peak near Grand Falls in 1966, which was attended by Premier Joey Smallwood and Prime Minister Lester B. Pearson.” The slogan for the federal-provincial project was “Yes, We’ll Finish the Drive in ’65.” Pearson’s Peak is the halfway point of the Newfoundland section of the TCH, and there was once a roughly 25-metre-high stone pillar with a bronze plaque at the site where Smallwood and Pearson met on July 12, 1966. Eventually it fell into disrepair and was removed.

But this wasn’t Smallwood’s first time on this new highway. According to CBC Archives, “The first car crossed Newfoundland in 1958. In fact, five Land Rovers made the drive together, and Premier Smallwood was at the steering wheel of the head car.”

Not just any car. It was this exact Land Rover that rolled out of the garage in Cupids in July 2020. The same Land Rover which returned, I am told, to the official opening ceremonies of the TCH in 1966.

Harold Akerman, aged 71 and a resident of Cupids, confirms that with a grin. “This is a pretty special vehicle. In 1984, the Newfoundland Antique and Classic Car Club [NLACCC] obtained this 1958 Land Rover from the Government of Newfoundland and Labrador. It was donated to the Club for restoration and preservation as a piece of the province’s transportation history,” he says.

“There were actually a number of Land Rovers purchased from Adelaide Motors in St. John’s by the provincial government of the day, since the going on new roads being built was very rough. We have been able to verify this one was used by former premier Smallwood. Government officials or groups such as Mines and Resources used the others for doing survey work and such. When this particular Land Rover reached the end of useful life, it ended up in a storage facility in the White Hills in St. John’s, where some of the NLACCC members heard about it. The government asked if NLACCC would like to have the vehicle. It was in sad shape, but they took it on and became custodians of it, and started an extensive and excellent volunteer restoration.” 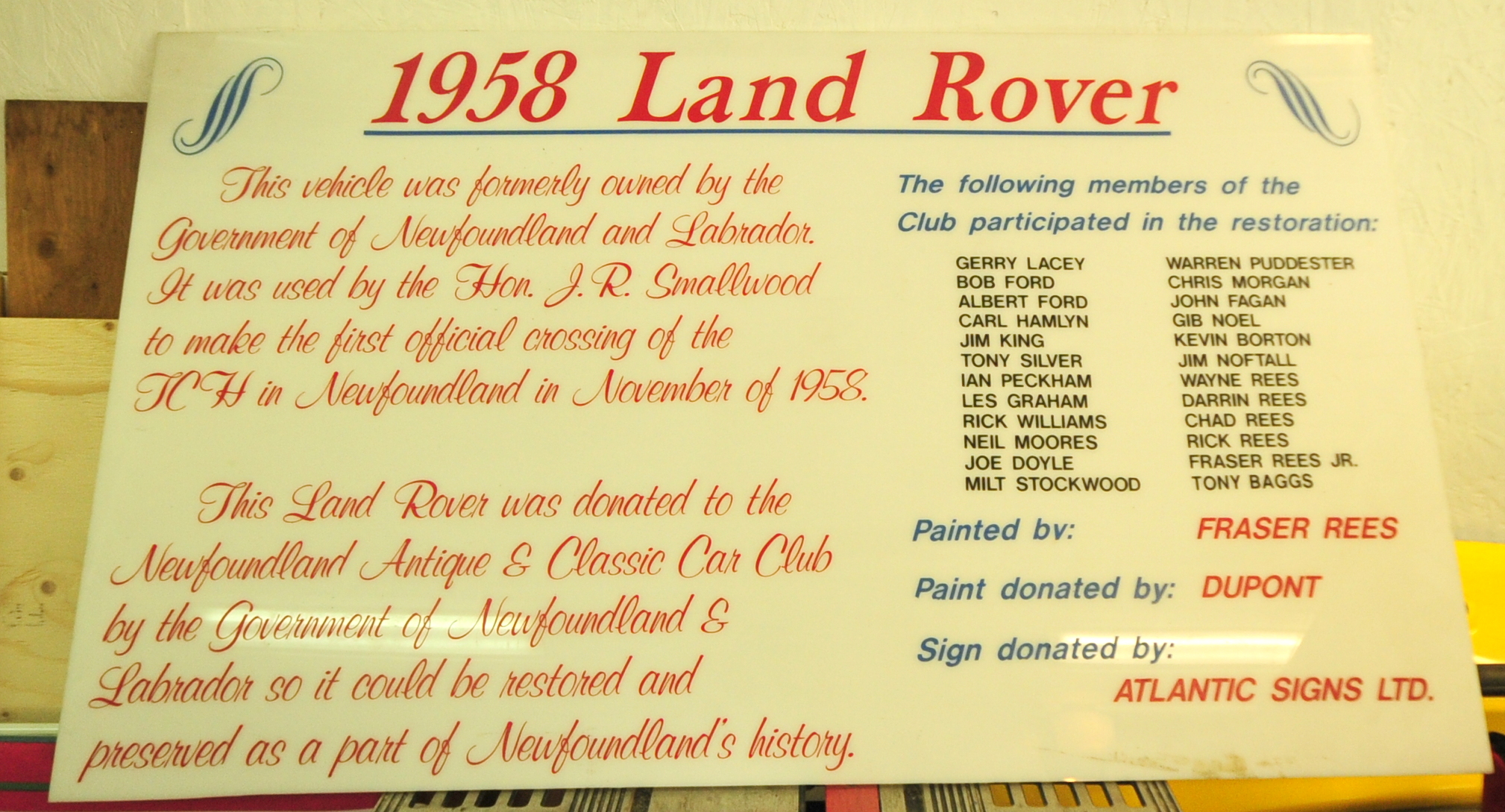 Harold adds, “The last time it was driven was in the year 2000, when the National Association of Antique Automobile Clubs of Canada did a coast-to-coast tour that ended in St. John’s on August 18. Premier Brian Tobin met the tour group at Paddy’s Pond on the outskirts of the city, and he drove this Land Rover and led the group of approximately 200 antique vehicles to Confederation Building...”

The Land Rover remained in storage these last 20 years, requiring some fixing before it could go on another ceremonial run. Though overall, it’s in remarkable shape.

“This older Land Rover has an aluminum body on a steel chassis, so it held up well,” Harold says. “The springs probably have about 15 leaves in each spring, which makes it really stiff and hard to ride, but that was the way of them.”

With a new radiator, carburetor, brake shoes and drums - all shipped from England - the Land Rover was ready for a 2020 outing, and this time it was more personal. Destination: home.

“This was a great day for everyone, but especially for the Smallwood family and Joey’s children, grandchildren, great-grandchildren and great-great-grandchildren as we brought the Land Rover to the former premier’s home and the family got to enjoy the vehicle for a couple of hours,” Harold says of today’s outing. “It was a chance to share memories, stories, and an opportunity to take photos; and they were really, really pleased. I am sure the late premier Smallwood, if he was here, would be just as delighted to have that Land Rover come back there today. I met Joey quite a few times, and I remember he attended the unveiling of the Land Rover when the original restoration was done by the NLACCC. It was a very emotional and moving moment for him and the audience. It meant a lot then, and I think it still means a lot now, not just for people who like antique autos, but for everyone in the province. There’s a lot of history tied up in this vehicle that’s bigger than the Land Rover itself.”

After an afternoon of visiting, reminiscing and children exploring the Land Rover, it was time to head out. On the way back through the famous gates to Premier Smallwood’s former home, the Land Rover turned upon the access road and pointed its grill towards the TransCanada Highway. It was a tip of the hat to Smallwood, Pearson and all who strived in any way to complete that remarkable ribbon of road that brought together this vast country.

I went in search of a story of a classic car, but came away inspired by the doers and the dreamers, both the famous and the obscure, as a journey along the highway of history came full circle. The legendary Land Rover finally headed home to finish the drive.

Watch this short video of Dennis's ride with Harold Akerman and his grandson Daniel Gosse in Joey Smallwood's Land Rover.