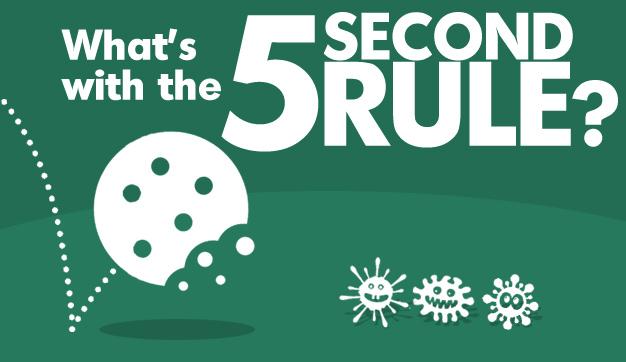 What is with the five-second rule about food that falls on the floor?

Have you ever found yourself in this predicament? You get ready to take a big, satisfying bite out of that long-awaited treat when suddenly a chunk of it cracks off and falls to the floor. In a moment of quick thinking (or rather, a lack thereof), you scoop it up and shove it into your mouth, hopefully before anybody notices. Don’t judge; we’ve (likely) all been there! But you managed to pick it up within five seconds, so it’s all good, right?

The “five-second rule” is one that many of us have invoked time and time again to minimize food waste (or just because we really, really wanted that gummy bear). But you may want to second-guess that “rule” before you put another bit of floor food into your mouth.

In their book Don’t Swallow Your Gum!: Myths, Half-Truths, and Outright Lies About Your Body and Health, Drs. Aaron Carroll and Rachel Vreeman (both professors of pediatrics at the Indiana University School of Medicine) examined a study that put the five-second rule to the test. The study, published in the Journal of Applied Microbiology, looked at the survival and transfer of Salmonella typhimurium from wood, tile or carpet to bologna and bread. It concluded that Salmonella “can survive for up to four weeks on dry surfaces in high-enough populations to be transferred to foods and… can be transferred to the foods tested almost immediately on contact.”

In this study, the “worst offender” of the five-second rule, explain Carroll and Vreeman, was bologna on tile. “Over 99 per cent of the bacterial cells transferred from the tile to the bologna after just five seconds of the bologna hitting the floor!” they write.

Carroll and Vreeman note that it’s not just bacteria that people should be concerned about when their food hits the floor. “A study of pesticides on household surfaces shows that these toxic chemicals can also transfer to foods like apples, bologna and cheese. The pesticides seem to take a little longer than bacteria, though.”

So the next time you drop that piece of chocolate on the floor, forget about the five-second rule and send it straight to the trash.