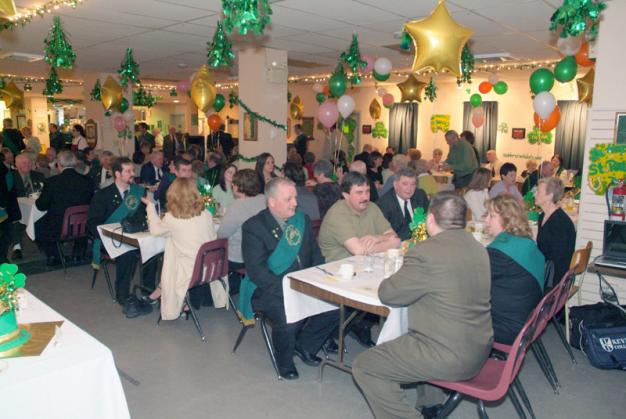 The St. Patrick’s Day holiday is about more than just drinking.

St. Patrick’s Day, also called the Feast of St. Patrick, is celebrated annually in much of the world on March 17 to commemorate the saint who brought Christianity to Ireland in the 4th century BCE. During his life, he established schools, churches and monasteries throughout Ireland.

Yet, the most popular St. Patrick’s Day celebrations have little to do with religion and more to do with wearing funny hats and shamrocks, dancing and drinking green beer. The story of how a religious holiday came to involve drinking and partying is an interesting one.

In Newfoundland and Labrador, there is perhaps nobody better to tell that story than the folks at the Benevolent Irish Society (BIS). So Downhome met with Bob Gillard, past president and vice-patron of the BIS, and Marie Raymond, chair of the Culture and Heritage Committee, to get the whole story over coffee (without Bailey’s!).

The Benevolent Irish Society has existed in Newfoundland and Labrador since 1806, the oldest non-religious organization in the province. It was originally established as a charitable organization that helped the needy regardless of their religion. In 1823, the BIS built its first school, which existed under various names until 1985. Today, among other charitable endeavours, it supports the School Lunch Association.

The BIS has been celebrating St. Patrick’s Day since 1807. In the early days, the BIS did not have its own building, so members would go to a hotel or a restaurant for dinner. At dinner, they would serve alcohol and toast the various Saints, Ireland itself, and other important figures. This litany of toasts was a broad St. Patrick’s Day tradition that may explain how the holiday came to be associated with drinking. In the 1850s, as the Catholic presence in Newfoundland grew, the celebrations became more religious in nature and shifted away from the drinking aspect.

The toasting of Saints is likely the oldest connection between St. Patrick’s Day and drinking, but there is a wider drinking culture that has permeated the entire thing. As Bob puts it, “I think the Irish are known for liking to tip their arm.”

Marie points out that St. Patrick’s Day falls in the middle of Lent, the period of the year when Catholics sacrifice indulgences. The Catholic Church used to permit people to take a one-day break from Lent for St. Patrick’s Day, she explains. “If you had any sweets, you’d shove them into your face while you could,” she jokes. And as consuming alcohol was not permitted during Lent, folks would go all out on St. Patrick’s Day.

The thing that really ties together the celebration of an Irish holiday and the downing of pints is Irish music, which tends to make a lot of references to drinking, parties and going to pubs. Look no further for an example than the 1993 album Irish Drinking Songs, a compilation by the Clancy Brothers, the Dubliners and Tommy Makem -  all Irish artists. Here in Newfoundland and Labrador, much of our folk music is Irish in style, performed by artists like Fergus O’Byrne, the Masterless Men and Great Big Sea.

As long as it is done safely, drinking on St. Patrick’s Day can be a great time. On March 17, plenty of folks will hit pubs to dance to folk tunes and drink green beer. (In Newfoundland and Labrador, pubs run Paddy’s Day events for up to a week!)

The holiday can also be a time to reflect on the Irish heritage that is so influential in this province, and perhaps learn something new about Irish history and culture. The BIS puts off various events, including an afternoon tea, a dinner and dance, and various educational lectures.

While not everyone’s a drinker, the holiday is for everyone, young and old alike. To that end, here follows a list of St. Patrick’s Day events that do not necessarily involve drinking.

This Benevolent Irish Society tradition is being revived for everyone. Make no mistake - even though it is dubbed a “ladies” tea, all genders are welcome! There will be refreshments served along with tea and non-alcoholic punch. Come out for an afternoon social that celebrates all things Irish.

Film buffs, check this out! The BIS will beshowing Camino Voyage, directed by Dónal O'Ceilleachair. The documentary follows a four-person crew that embarks on a 2500-km voyage from Ireland to Spain in a boat they built themselves. It stars musicians Glen Hansard and Breanndán O Beaglaoich, artist Liam Holden, stonemason Brendan-Pháid O Muircheartaigh and poet Domhnall Mac Síthigh. This multi-award winning film is described as “an epic 2500-km modern day Celtic Odessey.”

Turn keg day into leg day with the Shamrock 5K Run around MUN campus. Your participation gets you some cool race swag, including a multipurpose neck warmer and a stone finisher’s medal. There is a post race reception at the Breezeway, but if you’re not feeling it, you can just do the race. Registration is available at www.shamrockrun.ca.

If you want to party but aren’t in the bar-hopping mood, check out the annual BIS Dinner and Dance. There will be a hearty meal of cream of mushroom soup, stuffed chicken breast with mashed potatoes and veggies, and cheesecake, with tea and coffee to top it off. Then dance the night away to your favourite Irish tunes.

BIS President Shawn Skinner invites you to come out for a traditional Irish Sunday brunch to celebrate St. Patrick’s Day weekend. All your favourites will be served: homemade fishcakes, bangers, corned beef hash, eggs, cod au gratin and more! Wash it all down with tea and coffee. Have a scoff!

For St. Patrick’s Day on the West Coast, Marble Mountain is the place to be! The lifts will be operating on their usual schedule, with live entertainment in the Knotty Pine Lounge. Why not break out the snowboard or skis and hit the hills to celebrate the weekend?

For many townies, breakfast at O’Reilly’s is a St. Patrick’s Day tradition. This is an all-ages event, so while alcohol will be available, it will not be the primary focus of the festivities. The brunch on Saturday morning will feature a performance by the Masterless Men and a traditional carvery buffet. On St. Patrick’s Day, the fun starts at the crack of dawn! There will be a breakfast buffet, and performances by Fergus O’Byrne and his son, Fergus Brown O’Byrne, and Chris Hennessey. Tickets are on sale at www.oreillyspub.com.